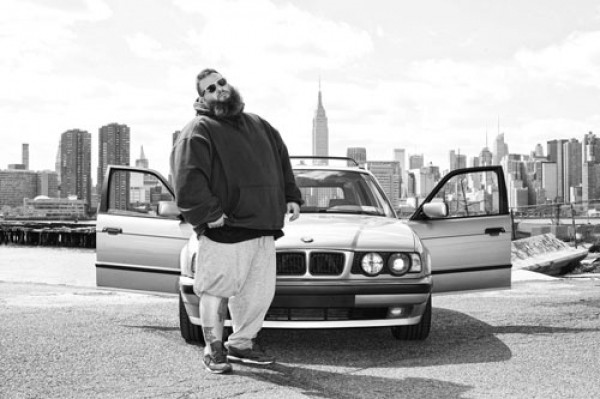 Action Bronson takes a massive dab hit and proceeds to hack a lung into the phone. “Pie Hole is one of the best pizzas I’ve ever had in America,” wheezes the New Yorker from his friend and producer Party Supplies’ Brooklyn-based studio. His accent is a thick blend of outer-borough slang and Marlon Brando’s Godfather. “I would know, too,” he says before coughing for a good 20 seconds. “The one that has the little bacon sprinkles on it, the goat cheese, the tomato and the caramelized onions. It’s tremendous.”

Bronson doesn’t mind discussing food. The chef-turned-rapper has a cooking series with Vice, and just about every song he creates has at least a half-dozen hints at something you could find at a delicatessen.

Rappers have always written about what they know best. But chatting about food is only one of many Bronson specialties. Over the past few years, the Albanian Prince has emerged as a prolific master of pop- culture innuendo, the type of name-drops that result in late-night Wikipedia searches for forgotten athletes like Placido Polanco or Marty Jannetty. To scratch the surface, his cast of characters include everything from thinly sliced prosciutto and dead wrestlers to sandbagging ballers from White Men Can’t Jump.

“These are all things from my mind, conversations I’ve had with people,” Bronson says. “Sometimes I recollect with the homies about old baseball players, football players, shit like that.” It’s a style of storytelling that producer Alchemist has appropriately dubbed “slideshow rap”—in other words, a series of rap vignettes that somehow all piece together in the end. On the track “Don’s Cheek,” from Bronson’s latest mixtape, Blue Chips 2, he paints a picture of his fictional extravagant lifestyle. “Catch me on Venice Beach working on my base, no blond streak/ Swimming trunk, 30k in arm’s reach/ I’m on the boat, in the water like a swan’s feet/ To show respect you kiss both sides of the Don’s cheek.”

When asked if slideshow rap was merely the result of marijuana brain farts, Bronson responded in the most Bronson way possible: “It’s like your aunt Blanche, right? It’s her 90th birthday and you gotta go to the hall, where they rented it out for the party. Everyone’s dancing or whatever, and the grandchild put together this whole slideshow of her life up on the wall. You know what I’m saying? There’s a lot of different pictures, but they’re all about her and it all connects.”

The most literal example of Bronsolino’s slideshow can be found in the promotional trailer for Blue Chips 2. In the video, Bronson, aka Mr. Baklava, drops a duffle bag of cash at Patrick Ewing’s feet in an effort to sway the Knicks center to throw a game winning layup. It’s an absurd alternate reality, but the scene is a real-life interpretation of the line from Bronson’s track “9.24.13.” Bronson raps, “I told the driver, Lenny, swing me by the Garden, I gotta talk to Pat/ Showed him some stacks/ Then showed him the gat, like you’re gonna miss the finger roll, right? Yes, Mr. Baklava/ Then I cartwheeled in an aqua car.”

Creating these miniature rap tableaus is what Bronsolino does best. If he’s not fixing an NBA game, he’s selling coke to mobsters in a Brooklyn sauna, or training a dolphin to pull back the hammer like Dolph Lundgren—every piff-induced line is a clue to the character that is Bronson.

“I always thought [rap] was easy, but now I’m more creative, more precise,” he says. “I’m able to convey what I mean, what I say and how I want to say it.”