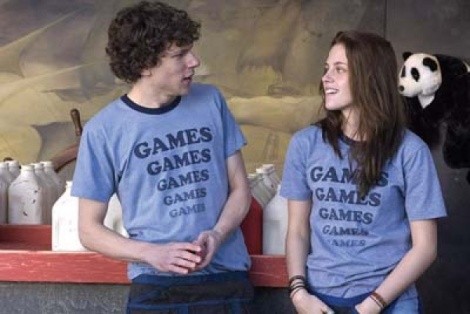 Some will hear the first guitar blast during Adventureland’s opening moments, and think nothing of it. For others, The Replacements’ “Bastards of Young” is such a touchstone that writer/director Greg Mottola (Superbad) may have you in the palm of his hand before you’ve seen a single frame of the actual movie.

Nostalgia is among the trickiest of cinematic bets, because you can lose those with no connection to the story’s era just as easily as you hook its contemporaries. But, despite setting his story in the summer of 1987, Mottola wisely avoids making his story about the summer of 1987. His protagonist, James Brennan (Jesse Eisenberg), is a college graduate whose Europe-trekking and grad-school plans wind up in limbo after his dad loses his job. James is forced to take a summer job at an amusement park in his hometown of Pittsburgh—where he begins to think of Em (Kristen Stewart), his co-worker on the midway, as the edgy maybe-girl-of-his-dreams.

Mottola does a terrific job of establishing the milieu of the run-down Adventureland. He was also smart enough to cast Martin Starr as James’ mentor Joel, a bitter intellectual, and Ryan Reynolds as the park’s lothario handyman. The script is full of the small touches that give a story a kick: a letter-deficient sign at a roadside bar advertising the local Rolling Stones cover band as “Tumbling Dic”; the way the park’s super-hot-girl employee is known by the drooling guys simply as “Lisa P.”

But the real appeal comes from the romance, and particularly from Eisenberg. While at first, it seems as though Mottola is trying too hard to have Eisenberg channel Michael Cera, his star eventually finds his own appealing take on sensitive, hyper-literate romanticism, including his affected over-use of the expression “per se.” Personally, I don’t get Stewart—all moody looks and breathy line readings—as an object of desire, but her casual chemistry with Eisenberg works. Adventureland delivers a sweet reflection on a summer love—and you didn’t have to be there.