Breakfast in Silence, CW: Loss, Crow Killer, Enslaved to One, The Nods, Overripe, and more. 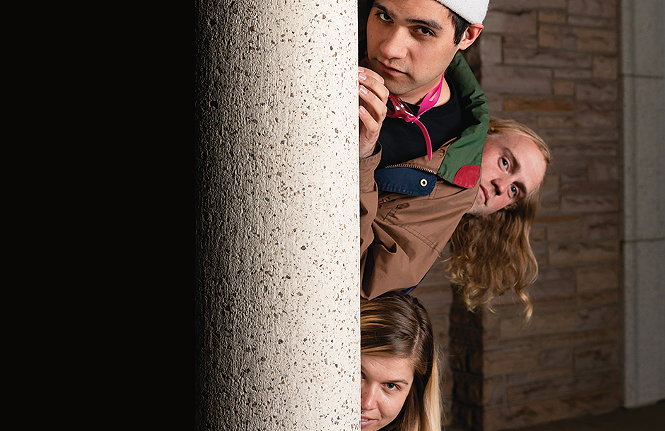 Album reviews:
Breakfast in Silence, CW: Loss
Released: March 27, 2020
The sophomore full-length from Salt Lake City's emo revivalist outfit Breakfast in Silence—Val Brown (drums), Russ Wood (guitar) and Ash Bassett (guitar/vox)—is a nine-song emotional purge that improves on the churning jangle-punk of 2018's It's Hard To Be Open-Minded When You Wanna Die. The songwriting contains a contradiction, though, which existed in singer Ash Bassett's past lyrics, too. Superficially, the writing is vulnerable and forthcoming—scattered with personal accounts of grief, guilt, abuse and despair—but it also hides away from itself. Lyrics that begin as a plain report to the audience twist into secret imagery. Musically, CW: Loss is a clear leap forward for the band, even if it sometimes feels limited. The heavy sections could be heavier, the melodic songs more melodic, the grooves tighter. But, it's a testament to how intentional this band is that their multifaceted arrangements are distinct, if not high-contrast enough. They have a good instinct for balancing dissonance and harmony, and their guitarwork is nimble and creative, giving these nine songs a real sense of understated accomplishment. "Call Your Grandma" is the best song the band has written yet, emotionally complex but direct; "Riff Hard x Solo More," "The Worst" and "DLTN" stand out, too. Breakfast in Silence will only improve as their dynamics become more conspicuous, but CW: Loss is an emotional success. A live streaming album-release show is scheduled for April 10. Details can be found at facebook.com/breakfastinsilence or on Instagram at @breakfastinsilence.

(Alex Murphy)
Crow Killer, Enslaved to One
Released: March 6, 2020
Crow Killer have clearly done their homework, and it shows. While my limited personal experience with metalcore led me to better-known reference points like Knocked Loose, Gaza and Converge, this SLC quintet cites as influences Belgian metalcore luminaries Congress and Liar, as well as obscure, mosh-ready punk acts like Vamachara and Detain. The band's desire to make a mark on a genre they're intimately familiar with comes through loud and clear on their debut full-length Enslaved to One. On the album's Bandcamp page, genre tags like "stompcore" and "gospel rap" might set off alarm bells in some listeners' heads, but within seconds of pressing play, opener "Castigate" will lay to rest any fears of ill-advised genre-blending. Tyler Rhodes and Josh Nemcek's rabid, chaotic riffs and frontman Blake Foard's throat-searing screams combine to kick the album off with a bang, and the subsequent nine tracks keep up the energy with aplomb. Throughout the album, Crow Killer never forget their principal duty of providing aggressive, pummeling tunes to get a crowd going, but with aspirations go a little beyond the mosh pit as well. Tracks like "Hang Tight" and "Fight Back" carry a blunt, unambiguously progressive message in their lyrics, and "Bring Back the Blood II" enlists guest vocalist Megan Golden for a moody, off-kilter venture into post-hardcore. Enslaved to One is a bold first step from Crow Killer, positioning the band on the cutting edge of Salt Lake's heavy music scene. (Nic Renshaw)

The Nods, Overripe
Released: June 22, 2019
For a few weeks in mid-2017, The Nods' "The City Swallows" pretty much ruled my life. I was anxiously awaiting the start of my first year in college and itching to finally move out of the Salt Lake area, and the clattering, noisey claustrophobia of the track−combined with frontman Rocky Maldonado's apoplectic snarl of "I hate living in the city!"−captured that particular angst better than just about anything else I could find. "The City Swallows" does not appear on The Nods' 2019 LP Overripe (though several other tracks from its excellent parent album Ariadne's Thread do), but listening to Overripe was nonetheless a great reminder of why I fell in love with that song and why The Nods still occupy a unique niche in the Salt Lake music scene. Psychedelic and garage rock have both thrived throughout the valley for the past decade-plus, and while plenty of bands offer quality examples of one or both of those genres, the Nods have a more sour, post-punk influenced take on those sounds that stands in sharp contrast to the overall trend of good-time, classic-rock boogie in the so-called "psych lake" scene. The heavy use of reverb effects feels like a dense smog hanging over the record, and tracks like "Sufferette" and "Brittle System" make use of dissonant guitar feedback and busy, cymbal-heavy drum beats to create a feeling of pissed-off, punky dissatisfaction. As the band's Facebook bio puts it, The Nods are The Nods, and they're still damn good at it, too. (Nic Renshaw)

Branson Anderson, Applecore, Baltimore
Released: Sept. 20, 2019
Logandale, Nev. is one of those sleepy desert towns that dates back to the mid-1800s, the kind of place most folks never become aware of. Yet it provided the ideal environs for a budding singer-songwriter intent on making music that reflected those down-home origins. His initial attempt to achieve that goal began with a bus ride to Nashville where he hoped to meet Jack White, owner of Third Man Records. Unfortunately, it never happened, and he was forced to return home empty-handed. Nevertheless, he held true to his hopes, and a homegrown ethos that incorporated such early influences as Dylan, Johnny Cash and Robert Johnson. Now living in a trailer in Ogden, he makes music that holds to the essence of true Americana—unvarnished, unfettered and decidedly unassuming. It's a sound conveyed through a relentless ramble and the intimacy of an acoustic guitar. Anderson's latest effort is a follow up to Graydog, his 2017 debut, similarly produced by another Utah transplants-turned-native son, Joshua James. Still, Anderson deserves the credit here; his craggy vocals, folksy demeanor and earnest delivery add an unflappable sense of sobriety to each of these offerings. "Daddy's Ramble," "Don't Go to the City," Dessert" and "Dark Haired Girl" all attest to Anderson's tempered tones. There are exceptions—the swampy stomp of "When I Go," the unexpected shriek that accompanies "Jelly Man" and the spoken dialogue shared in "Frayed Apollo"—but mostly the music remains untarnished, a supple serenade every step of the way. (Lee Zimmerman)

Fingers Crossed:
Kilby Court
While S&S and all its venues are still only putting off shows until May 11 (can't believe it's normal to say "only" now), it seems prudent to expect shows will not be re-starting again in May. So we're going to follow the more realistic and conservative line of thinking, and report on what's going on the first little bit of June (and the very, very end of May), instead. After you finish reading this list, have a little prayer for shows on top of shows this summer, and warm summer nights spent in the Kilby Court courtyard.

SUNDAY 5/31
Hot Mulligan, Heart Attack Man, Fredo Disco, Super American
One of those names you know without knowing how you know it, Hot Mulligan is from the Midwest, an area with a tendency towards churning out memorable names. The band, who have been dropping music since 2015 and who have two full albums to their credit, specialize in uplifting pop-punk that's impossibly infectious. 6 p.m., $18, all ages

SATURDAY 6/6
Weathers
You may have heard their 2016 pop banger "Happy Pills," which is exactly the kind of song it sounds like and was a good herald for the Neon Trees-informed sound they've chased since then. They've maintained their chasing-the-stars attitude since then with singles like 2020's "Feel Good," because if it's good and you've got it, then why not hold on to it? 7 p.m., $13, all ages

MONDAY 6/8
Waking The Cadaver, Vulvodynia, Organectomy, Wormhole
Death metal bands have been in the DMs of the City Weekly music inbox more than any other genre, perhaps because they're unfazed? Waking The Cadaver is no exception, and the slow and steady-working band—who have released three full albums since 2006—will be out on the road gladly when this is all over. Return to normalcy with this stacked night of death metal riffs and no deathly virus anywhere near your mind. 7 p.m., $15, all ages

TUESDAY 6/9
Cub Sport
An indie band if there ever was one, this Aussie group—who have been building up their platform since 2011—have finally won themselves a spot on the global indie stage with a soft-swaying sound that could only be crafted down under. Singles like 2019's "Hearts in Halves" take on an altogether more sensual feel, and it suits them sportingly. 7 p.m., $15, all ages

Fingers Crossed:
The Complex
The Complex has also implemented the hefty business of postponing and rescheduling many of their shows--almost as many shows as have been outright cancelled. Their Instagram feed is a constant stream of updates on shows cancelled since this all got serious in mid-March. This leaves plenty to look forward to when this all lifts, though, and they're making sure everyone remembers, with lots of posts about throwbacks to shows past. Take a look at the feed if you're feeling nostalgic for simpler times.

WEDNESDAY 6/10
Coin, Sure Sure
The postponement of the Dreamland Tour by upbeat and funky indie pop act Coin was probably closer to a nightmare for fans. But luckily enough, the group will still be going out in support of the Dreamland album (their first since 2017) with a rescheduled tour that will find them riding with support act Sure Sure, whose heartfelt cover of Talking Heads' "This Must Be the Place" will really make The Complex feel like the place to be after months of isolation. 7 p.m., $25, 21+

WEDNESDAY 6/17
AwolNation, Andrew McMahon, The Beaches, Bleeker
This mid-June night is blessed with the late-aughts wonder that is AwolNation. If you were around online during that time, you know the song "Sail," the most intense radio-friendly song perhaps of its time. Eight years later, 2019 tracks like "The Best" highlight AwolNation's status as just that. The sweeping pop stylings of Andrew McMahon will balance the night out. 6 p.m., $40, 21+

THURSDAY 6/18–6/19
Blue October
Another staple of the same period, Blue October and their signature gloomy, alt-rock sound will be making their way to the ears of SLC residents two nights in a row. An outright prolific act who was active with multiple albums before their breakout album Foiled in 2006, they've followed it up with eight albums since then, digging into their sound even more with solid post-rock tonalities and inclinations. 7 p.m., $35, 21+

SATURDAY 6/20
The Cadillac Three
There's no way to describe the delight of a song titled "Crackin' Cold Ones With The Boys" unless you've been on the internet in the past few years, but perhaps the fact that no one can crack open cold ones with their boys currently is enough to make you emotional. This song comes from the fourth full-length effort, Country Fuzz, by the approachable and easy-going country act The Cadillac Three. This group is all about the good times, and they find and deliver them easily. 7 p.m., $22, 21+