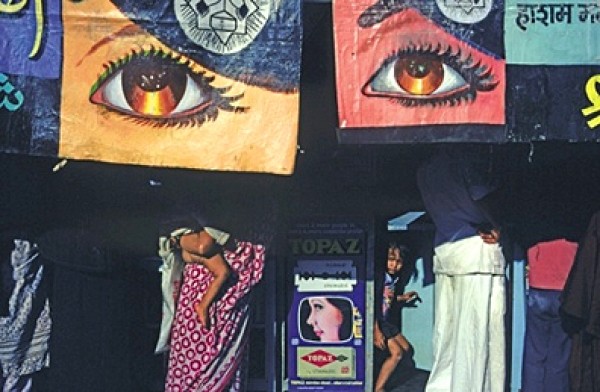 Photographers have described the world with light since the invention of the photographic medium. In color photography, they use the visible spectrum of the color palette to illuminate something about their subject matter. For photographer Alex Webb, light is a way of illuminating something deeper and more profound about what it means to be human. The Suffering of Light: Thirty Years of Photographs assembles 45 of Webb’s large pigment prints from three decades of work, bridging the gaps between fine-art photography, photojournalism and street photography. He is recognized as enough of a pioneer in color photography that the exhibit has been organized by the Aperture Foundation, who also published the accompanying book.

Webb has photographed in a wide variety of locations around the world, in a variety of cultural contexts. These scenes of everyday life often collide with sociopolitical realities, as in a view of a mother and infant on a rooftop in Brooklyn Heights on Sept. 11, 2001, with Lower Manhattan in a cloud of smoke in the background; or an image of Mexicans arrested by border-patrol agents in San Ysidro, Calif., in 1979. His images show that the sociopolitical can’t be detached from the day-to-day.

Rather than being carefully composed, Webb’s images often come about through serendipity. “I took the [1979] photograph while working on a long-term project on the United States-Mexico border, riding in a Border Patrol vehicle, when I saw this scene beginning to develop in the field to my right,” he says. “I asked the border patrolman I was traveling with to stop his vehicle, and I rushed into the field and managed to take this photograph.”

In Istanbul, the challenge was to capture the complexities of a city that embodied characteristics both ancient and modern, secular and Islamic. “Ultimately, the challenge in all situations remains the same: to take photographs that begin to suggest the mystery and complexity of the world,” Webb says.

The title of the collection is taken from a quote by Goethe: “Colors are the deeds and suffering of light.” Goethe’s theory of color was that color emerges from the tension between light and dark, and Webb utilizes a tonal spectrum full of intense variations, playing out in the arena of human action. “I’m not sure I’m qualified to talk about suffering in the abstract,” he says. “And I don’t intend for my photographs to say one thing. In fact, my photographs often have a significant degree of ambiguity and mystery. Whatever my pictures say about suffering—and that’s not for me to say but for each viewer to discover—lies embedded in the images.”

Webb’s transition from black & white to color marked the turning point in his work. It was part of his response to the emotional tone of the places where he worked. “I found myself photographing in places— Haiti, along the United States-Mexico border—where searing light and vibrant color seemed almost embedded in the worlds I was photographing, so different from the gray-brown reticence of my New England background,” he says. “I realized I had to respond to these worlds in color, and have done so ever since.”

The contrasts between the rich colors of poverty-stricken street scenes in Cuba, the golden flowers in the field patrolled by border guards at the United States-Mexico border, and the mother and child against a backdrop of 9/11 describe a world of stunning beauty in the midst of violence.

“I take complex pictures because the world I experience is a complicated and ultimately inexplicable place,” Webb says. “My experiences in the world, my travels as a photographer, lead me to believe that there are no simple solutions, no easy answers, just a lot of difficult and perhaps unanswerable questions.”

Webb’s process of artistic creation is as complex as the images themselves. Any of his major projects involve returning to the same site repeatedly. “For me, the process of coming and going many times is special and essential,” he says. “I go somewhere, I return home and look at the work, then go back again, and so forth. Each time I look at the work after returning, I understand something else about the place, or myself or both. And then I go back.”