2 Years in the Peace Corps 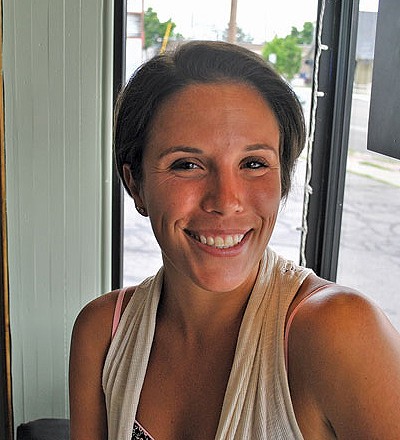 Alexx Goeller returned home to Cottonwood Heights in May after working in Senegal for two years with the Peace Corps, focusing on economic development. Goeller, now 25 and working for the United Way of Salt Lake, wrote at TheDoubleXFiles.blogspot.com about her service, from the profound experiences to the hardships and everything in between—including the discovery that it’s considered very strange to cry in public.

Why did you join the Peace Corps?

I’d wanted to go since I was really young—probably 12. I grew up very privileged and I had a wonderful childhood, and I always wanted to reach out to people who hadn’t had the same childhood. I did a lot of service work, even when I was growing up. And then the Peace Corps seemed like the next step after college. A huge part of Peace Corps is going and creating jobs, but it’s also to show a better side of Americans, and to get people to see that we do care about other countries and other cultures and religions. I really do want world peace—I really do think it’s important, and something that’s somewhat achievable by people willing to get outside of their comfort box and out into the world, learn a language, put themselves in uncomfortable situations and talk to people.

Were you expecting the experience to be difficult?

Not as tough as it was, no. I’d been to east Africa before—I’d done a service-learning thing in Tanzania. I was only there for about a month, and I felt like the people wanted us there, they were friendly, I didn’t feel different ... I just felt very accepted. In Senegal, I did not get that feeling. I was harassed and targeted, and people didn’t really want me there, or didn’t know what I was doing there ... it was a really surprising thing to feel.

Is that a common feeling for volunteers?

It depends on the community. Most of us go into really small villages, and it takes a minute for people to get used to us being there, but once they’re used to you, you’re like part of the family. I was first in a small village of around 1,500 people, and then I was moved to a town of around 40,000. I got to experience being in a village where everyone knew who I was. But then I got moved to a big town; that’s where I got a lot of harassment, cause it’s just impossible for me to go to every person and say, “Hi, I’m Alexx, I’m here with the Peace Corps, I’m an American, what can I do to help you?” That’s another thing that surprised me. Countries petition to have the Peace Corps; it’s not that the Peace Corps out there pushing development work on these countries. Countries say, “We want Peace Corps in our country for this, this and this,” and have highlighted goals within a span that they want achieved through Peace Corps volunteers. I thought that meant I’d be going into a place where I’d be so busy, and there’d be projects coming at me all the time ... that was also not the case. I had so much down time.

How often do volunteers leave the program early?

It’s more common than you would think. I don’t know if this is the exact statistic, but I heard that around 30 percent of volunteers end up early terminating. And some of that is that they wanted to volunteer, but a job opportunity came up back home. Or it wasn’t the experience they thought it would be. I had a friend who left after a year. It’s fairly common, but there’s definitely also a stigma against it, which is too bad. They tell you from day one, “If this isn’t for you, leave.” And you really should—it’s your life, you shouldn’t be somewhere for two years if you’re going to be miserable. But at the same time, it’s not a walk in the park; it’s a really hard experience. So there’s always that line of, “Is this hard because it’s supposed to be, and this is how it should feel? Or is this so hard that I’m miserable and I should go home?” It’s hard to find the balance between those two. Me, personally, I’m a very stubborn person. When I set out to do something, I will do it, even if it’s something that I should have said, “This isn’t for me.” I wanted to leave at my year mark. I was ready to leave. And then I had this project come up, and I was like, “OK, I’ll wait for this to be over.” And that kept happening in my second year, where I was waiting and waiting, and then it kind of flew by. The second year was better—I had so many meaningful projects, the language was better, and I’m so happy that I didn’t go home. That’s what they tell us—the first year is really hard, but typically, the second year is better.

What’s it been like to adjust to life in Utah again?

Honestly, I think it’s harder than it was for me to go to Senegal. Going there, I was nervous and scared, but I was so excited, and I was doing something I’d always wanted to do. And coming home, things are so different here. I’d gotten so used to that way of life. I’ve noticed that when people ask me about the experience, the main question is, “How was Africa?” And it’s like, “Well, Senegal, the country I lived in, was interesting, but I can’t exactly put a label on the continent.” I get it; it’s like this mysterious land to people. But that was such a significant thing for me—it may have been the most seminal experience of my life—and people are just saying four words: “So how was Africa?” I’m supposed to just say, “It was good,” because as soon as I go past that, their eyes just glaze over, and then it’s on to whatever’s going on in Kim Kardashian’s life or whatever; stuff I just can’t relate to right now.

Are there many fellow Peace Corps volunteers in Utah?

Utah has a really small returned Peace Corps community. I went to an event at REI right before I left, and there were five people who had served in the Peace Corps. Cities on the coast, there’s such a huge community—hundreds of returned volunteers. And that’s such a great support system. For some reason, the Peace Corps isn’t really well-known here.

What’s the process to join the Peace Corps?

They really want to make sure that you are committed. It’s about a yearlong application process. Initially, you just go online and fill out a questionnaire about yourself—what your skills are, what you like to do, volunteer experience, leadership experience. You have to have a bachelor’s degree, for the most part, or significant work experience. And then you pass through to the nomination stage and are contacted by a recruiter. My minor was French and my major at Westminster was international business, so they were like, “Oh, business advising in Africa.” After that, you go through all of these medical reviews to make sure you’re healthy enough. There are Peace Corps doctors over there, but still, you’re getting health care in a developing country, so it might not necessarily be able to accommodate certain ailments. Then they make sure you’re legally cleared—the most you can have on your record is like a parking ticket. If you have a ticket you got for drinking underage, they want to make sure that’s not what you’re going to do. They know how rough it is, and they want to know how you manage your stress. They look at everything. If you want to do it, it’s something you have to start thinking about pretty young, and shape the way your life goes. And after you get cleared, it’s still another few months before you get your packet that says where you’re going, and the stuff to get you ready to depart.

Did the Peace Corps change the plans you’ve had for yourself?

I always thought I’d get my degree, do the Peace Corps and then get my master’s degree in international development and then work in USAID. But being in Senegal made me realize I do not want to work in development at all, especially at the grassroots level. It is so hard to push our sense of development on people. A lot of the people I dealt with were already happy—they were as developed as they wanted to be. It’s a difficult field, and super frustrating. But my work in Senegal with young girls and at-risk youth is something I’m really interested in, so I’d love to work with a nonprofit dealing with youth or youth development, or human rights. Peace Corps did shape that, because I didn’t realize how much I like working with kids. But I also learned I like to be somewhere that there’s organized tasks to do.

What are your thoughts on development?

When I lived in the village, they had wells, and they carried the water on their heads. That was what they did, and it was reliable, and it was what they were used to. When I was in the city, they had faucets, but sometimes the water would cut out, or it was dirty, and that to me was like the perfect illustration of “development”—they have these faucets that don’t work, and the people in the village have wells that are perfectly reliable. But then there are areas that really need to be developed, and even they are starting to recognize that—like women’s empowerment, and getting women in the government and more educated. Even some of the men are starting to come around to that. That’s the area of development I’d like to work in—not so much the material things.