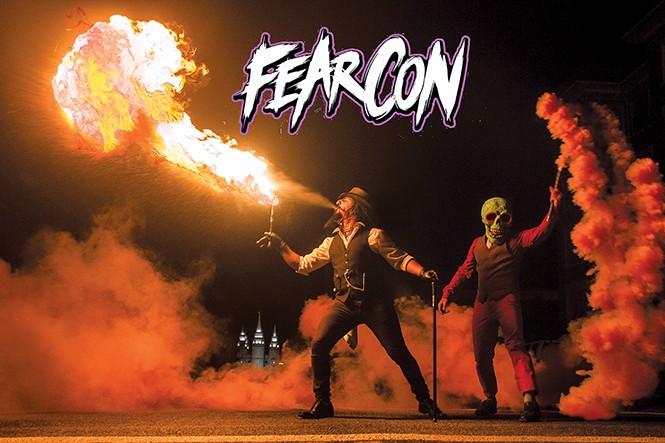 Not all of us have a sense when we're still in grade school for what the future holds, but Michael Hardle might have shown an indication of where he'd be today. "When I was 11 years old," Hardle recalls, "I made my first haunted house in a field behind my house. I've always had a proclivity for it."

With that history in mind, it's perhaps easy to see Hardle one day becoming a co-founder of the Halloween-themed Fear Con convention (along with former University of Utah football player and founder of the fitness convention FitCon, Dallin Rogers). That doesn't mean there wasn't a bit of a journey on the way to the inaugural Fear Con event in 2016. Hardle owns Fresco Press, a company that makes custom apparel, including the official gear for events like Salt Lake Comic Con. He and Rogers—who had met through Fresco Press providing FitCon's apparel—independently had been thinking about the success of pop-culture-themed conventions in Utah, and the possibility for a Halloween-centric convention. "We thought about how rabid people are for Halloween in Utah," Hardle says. "There was nothing like it in the market—or really, in the country."

As they started planning for that first Fear Con, they tried to take lessons from other conventions both in terms of what they already knew worked, and what they wanted to be different. They sought a focus on what Hardle describes as a "festival-like atmosphere," where there's entertainment and something to see around every corner, like fire-breathers and stilt-walkers. "We felt, like, with some shows and conventions, unless you're there for one specific purpose, there's not a lot to do," he says.

They approached the first event with cautious optimism about attendance, realizing how difficult it is to get people to spend their dollars on an unknown quantity. Around 13,000 guests came to the 2016 Fear Con—right down the middle of Hardle's initial target of between 10,000 and 15,000—and response from those attendees, whether directly or online, covered a pretty broad spectrum. "We had everything from 'it was the most fun, unique event,'" Hardle says, "to one that said, 'It was worse than a Halloween aisle at Walgreens.' It's hard to please everybody."

That's not to say that the organizers haven't listened to feedback, or considered tweaking the event based on last year's experience. Hardle acknowledges that the first Fear Con "kind of shot down the middle, trying to make it not too scary or gory to scare off kids. This year, while we do have a lot of stuff for kids to do, the overall tone and ambiance we wanted to make a little darker. There will be more horror-ish elements throughout the main hall."

"We also tried [last year] to get vendors who were more related to Halloween time, and it's kind of hard to fill an entire vendor hall with that," Hardle adds. "That criticism was a little bit unexpected."

For 2017, Hardle plans to return many of the things that were successful last year, including the Miss Fear Con "dark take on a beauty pageant" and its new male counterpart The Pumpkin King, plus a focus on costumes and cosplays with a more horror-tinged sensibility. Panel discussions are scheduled to include topics like creating your own haunted house, the works of H.P. Lovecraft, horror movies and the Victorian culture of death. Interactive elements include a zombie shooting gallery, board game demos and no-additional-charge haunted escape rooms, while the main stage will include performances of magic and hypnosis. Outside, guests can experience a "haunted zip line" into the dark.

A pair of premium events—requiring separate ticketing—provide some of the most potentially unique experiences. For one interactive haunting experience, participants have a bag placed over their heads and are transported to a nearby location, where they're immersed in the world of a horror story requiring problem-solving to survive the monsters within. Another is a set of performances by The Vampire Circus, a Florida-based troupe founded by former Cirque du Soleil member Francisco Santos. The combination of theatrical acrobatics, clowns, jugglers and audience interaction incorporates a storyline set in 19th-century Bohemia, following Count Dracula's plan for world domination. The Fear Con production marks the troupe's first-ever in the Western United States.

"What we're really trying to get across is how many experiential things there are to do," Hardle says. And probably with a bit more pizzazz than that haunted house he created when he was 11.