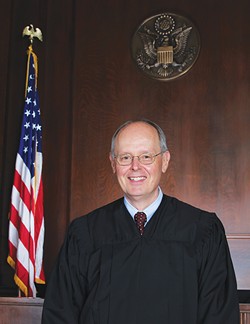 U.S. District Judge David Nuffer is pushing the Utah Republican Party, the Utah Constitution Party and Gov. Gary Herbert to use a mediator to resolve their ongoing lawsuit over Senate Bill 54. The election-reform law, passed by the Utah Legislature in 2014, allows political candidates to circumvent the traditional party-run caucus convention system and appear on the ballot by gathering signatures.

Lawmakers intended SB54 as a compromise between the Republican Party's desire to stick with the caucus-convention system and the Count My Vote (CMV) initiative that would have created a direct primary (allowing Utah's 650,000 unaffiliated voters to participate in the primary election of their choice). In late 2014, the Utah Republican Party sued the governor, arguing the state shouldn't have a say in how political parties choose their candidates.

At a Sept. 8 hearing, Judge Nuffer seemed to have little appetite for issuing a ruling on the lawsuit himself. "I get an ax, and you have pocket knives," said Nuffer. "You could do a wonderful sculpt, and I just cut broadly."

Mark Thomas, chief deputy to Utah's lieutenant governor and director of elections in Utah noted it was the Constitution Party that filed the motion asking the judge for mediation. "We're happy to try and mediate this," said Thomas. "But there's also the Republican Party. [GOP Chairman] James Evans said at the [Republican State Convention in August] that the Republican Party isn't going to settle this, so we're kind of in a tough spot."

In an interview with City Weekly, Evans seemed at least willing to give the mediation method a try. "The Republican Party has always been open to any avenue that would get this resolved," says Evans. However, he adds, "We're holding fast on our constitutional claims" that the state did not have the authority to pass SB54 in the first place.

In addition to the difficulty of finding a solution that all parties can live with, negotiations could be tricky because the governor does not have the power to enact changes to the law; that is the work of the Legislature. "You are, to some extent, negotiating with a ghost," Nuffer acknowledged.

Previous discussions between the parties have been unfruitful, and tensions are high among Republican Party leaders, legislators and the governor [see "Party Animals," Sept. 2, City Weekly].

If the Republican Party had not changed its rules to comply with SB54 in time for the State Republican Convention in August, GOP candidates would not have been allowed to run as Republicans in the general election.

Evans explained that the party was able to quickly pass those changes thanks to the advice and counsel of Judge Nuffer himself. "The judge said several times during that hearing that we should use our membership rules, so that's what we did," says Evans. The Republican Party now requires candidates going through either the caucus-convention system or the petition route to sign disclosure statements on their positions.

Even though the Republican Party met the deadline to be in compliance with SB54, it is still moving forward with a lawsuit in hopes of overturning the law entirely.

Nuffer has ordered the parties to agree to a mediator by Sept. 16. Some of the names suggested at the hearing included U.S Magistrate Judge Dustin B. Pead, former Lt. Gov.—and now CEO of the Utah Hospital Association—Greg Bell, and the Legislature's former general counsel Gay Taylor. The first round of mediation will take place on either Sept. 30 or Oct. 1.