All of the Buffalo

Comic-book creator Dave Chisholm brings his many artistic talents to bear on Canopus. 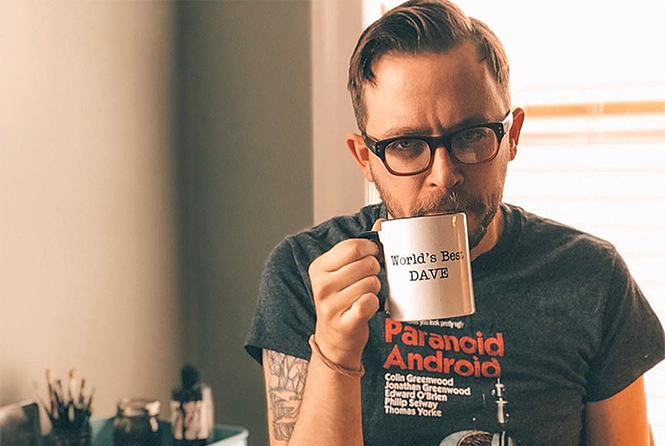 Creative ideas can come together in a wide variety of ways. For comic-book creator and musician Dave Chisholm, it can be a matter of finding the right fit between an idea and a genre.

"I have a Rolodex of themes, personal issues and concepts that are intriguing to me," he says, "then one for big conceits. I try to see which one lines up with which theme."

The writer/artist behind Let's Go to Utah! and one-time fixture in the local music scene finds a great pairing in his latest project, Canopus, a four-issue series that begins with scientist Dr. Helen Sterling awakening on a distant planet with no idea how she got there, or what her mission is. Chisholm visits Salt Lake City to launch Canopus at Black Cat Comics on Saturday, Feb. 22.

Canopus' story of someone coming to terms with the most painful moments of her past—"learning to let go of this poison she's carrying around," as Chisholm puts it—was in part inspired by Chisholm's recognition of that quality in himself. "I kind of hang on to grudges a little too hard," he says. But placing it in the context of an existential science-fiction story was inspired somewhat by a frustration Chisholm had with the popular Christopher Nolan film Interstellar.

"I liked [Interstellar], but my first thought walking out was, 'This movie would be 10 times more compelling if they gender-swapped all the characters,'" he says. "We've seen the trope of the male leaving the village to save everyone so many times. And the female scientist who kind of talks about love as defying the logic of science. How much more interesting that would have been if it had been a woman leaving her family to go into space and save the world? And it slowly morphed into this."

The narrative revolves largely around Dr. Sterling re-discovering her own identity while exploring this alien world—a device familiar enough that Chisholm actually has Sterling say in the first issue, "Amnesia ... could this be any more cliché?" "That's me signalling to the audience, 'I know this is a well-worn path,'" he says. "Then to play with that ... I think that plot device is justified by the ending."

Visually, Chisholm creates a fascinating juxtaposition of the events that Dr. Sterling is experiencing in the moment and the flashback memories that overtake her at certain points, conveyed in a frequently non-linear collage of images. "I'm really always striving to have the form reflect the content in comics work that I do," he says. "When I tell you, 'Remember your earliest memory of your father, or your first pet, or whatever,' you don't get that same linearity and temporal evenness. It hits you all at once. Certain things stick out more, certain visuals, a song maybe. But it's not evenly presented in your head. When readers have the physical experience of turning the page into a flashback sequence, hopefully they're hit with a little bit of that."

Getting the reader to keep turning the page is a key component of writing comics; when you're writing a continuing series, there's the added challenge of getting the reader to want to pick up the next issue. Chisholm notes that there's a very different storytelling dynamic he considers when writing a continuing series, as opposed to a one-off graphic novel. "When I made this book, it was 100% from the beginning intended to be an old-school floppy, comic-shop comic. I grew up reading comics, and I wanted to make a comic that would pull people along month-to-month," he says. "Single-volume graphic novels, you can really space out the pacing and decompress the pacing a lot; this is a pretty fast-paced story, very compressed storytelling. ... It's meant to be cliffhanger-y at the end of each chapter—trying to find ways to keep the mystery going."

Chisholm also brings his music background—he studied jazz at the University of Utah—to bear on his comic-book work; he's even teaching a course called "Comics and Music" at the Rochester Institute of Technology. "It all comes from the same part of my brain that's interested in formalism and craft," he says. "It boils down to the same concept of creating 'normal.' If you put on a Beethoven string quartet, it starts off beautifully, then explores areas that are more dissonant, disrupting normal. Generally, from my point of view, it's all about creating a sense of rules and consequence, specifically so you can upend 'normal' at some point."

And pulling all of his artistic interests together—in storytelling, in music, in visual art—is all part of his notion of "using all of the buffalo," pulling a metaphor from the resourcefulness of First Nation people. "The great thing about comics authored by one person," he says, "is this idea that you're seeing someone use all the parts of the buffalo to tell the story. Hopefully they're using every part of the medium."