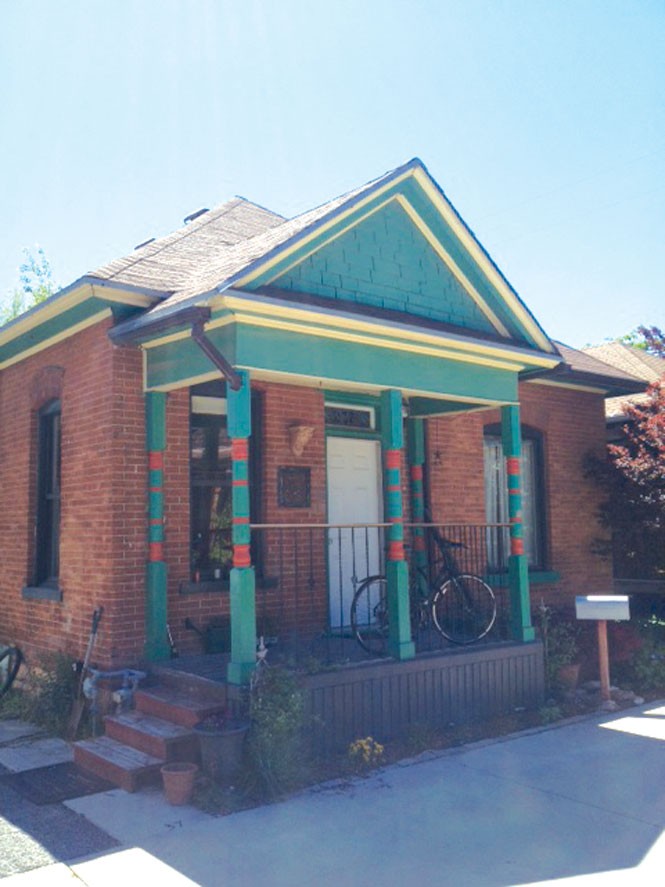 For residents on Montrose Avenue in west downtown Salt Lake City, their street of early-1900s bungalow homes are like Salt Lake City's best-kept secret. The quaint neighborhood—tucked away between 200 West and 300 West, and 700 South and 800 South—has Norman Rockwellian charm, despite being surrounded by office parks.

Chris Condit loves his circa-1913 home and his quiet street—that is, until the recent renovation began at the nearby Utah Nonprofit Housing Association building. Condit says if it weren't for the fact that he often goes home for lunch, he would not have felt the vibrations from the construction team's industrial jackhammers a few hundred yards from his home. That's also when he noticed a crack etching its way along his bedroom ceiling and walls, and the fact that one corner of his house had sunk 3 1/2 inches into the ground.

"The windows would be shaking like it's an earthquake, and that's acceptable [for] the city to do that to your home?" Condit says.

It's an issue that some in the city chalk up to unavoidable discomfort in the service of urban renewal—but residents, like Condit, wish the permit process would take more consideration of homes surrounding construction sites. Condit and other residents on Montrose are aware that their charming street has other less-than-charming features—including sandstone foundations beneath old brick construction, under unconventionally supported roofs.

"These houses are a perfect example of balance and gravity," says Montrose resident Tim White, who owns a home and a duplex on the street. "There's no steel in there, there's no ties—you know it's missing all the typical reinforcing features." White had to reinforce the roof of the Montrose Avenue rental duplex he owns by stringing an aircraft cable across the base of the roof and cinching it up with a farm jack—with the cable serving to keep the ends of the roof from splaying and collapsing. Since the construction has started, he's seen a crack several feet long emerge on one corner of the duplex.

Despite the apparent damage, White places little blame on the city. Rather, he hopes homeowners on the street fully appreciate the extra care they need to put into their historic homes.

"In reality, it's up to the homeowners to make sure their homes can withstand this," White says.

That's not an opinion shared by Condit—especially since one company he spoke to quoted him a price of $18,000 to reinforce his sagging foundation.

Condit says that when he discovered the damage that was occurring to his home, he began a frustrating game of phone tag with various city officials to find out what could be done. He learned that, in the end, damage claims resulting from permitted construction must be litigated, and damages can be difficult for homeowners to prove unless they have cameras set up in their houses to document damage.

"They can basically tear your house down, and they have permission by the city to do it," Condit says.

Downtown construction has also elicited groans from others like David Littlefield, whose law firm at 426 S. 500 East has been surrounded by construction and has likewise suffered from constant noise, downed Internet and loss of water.

"It was like having mini-earthquakes here behind us," Littlefield says. He's positive that the problems are only temporary. Still, he says it would be nice if the city could do a better job of explaining to businesses the impact adjacent construction can have.

"I would have loved to have the city come in and say, 'Here's what you can expect; these are the kinds of things that happen. In order to insure you're not damaged, take pictures beforehand,'" Littlefield says.

Salt Lake City Councilman Luke Garrott, whose District 4 covers most of downtown, says making city building permits more sensitive to nearby properties would unfortunately run against Utah's building-permit law. But, he says, the city should send out mailers to residents adjacent to new construction so they know who to call for complaints. He also recommends residents document their properties before construction begins.

Ultimately, he would like to see the city code strengthened but isn't sure the council can maneuver around state law. "The state code on building issues totally trumps local ordinances," Garrott says.