The coffee of the future is perfect every time 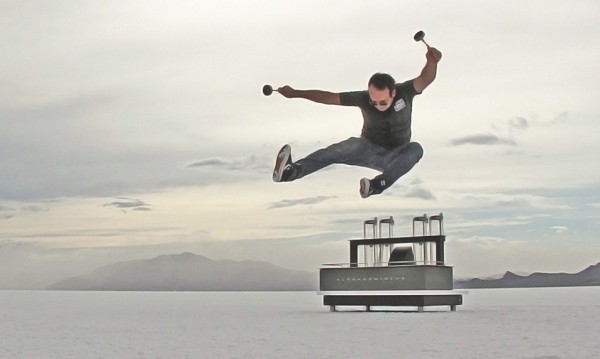 Khristian Bombeck is a mad scientist whose passion lies in brewing the perfect cup of coffee—each and every time. The founder and chief inventor of Alpha Dominche gets excited when demonstrating the Steampunk, a coffee-making contraption with four chambers, an electronic touchpad, automated controls and filter selections. It’s like space coffee.

Bombeck, a lifetime tinkerer, once owned a coffeehouse and roastery in Bozeman, Mont., where his quest for the ultimate cup began and where Steampunk prototypes were developed. In just more than two years, Alpha Dominche has sold nearly 200 Steampunks to coffeehouses worldwide. Currently, Nobrow Coffee Werks has the only Steampunk in Salt Lake City.

At Alpha Dominche’s hip headquarters in the Granary District, Bombeck prepares coffee. It’s mesmerizing watching the Steampunk in action—chambers filling, liquid moving, steam rising. Bombeck weighs the coffee, grinds it and places it on the piston in the chamber. The “recipe” is punched in, and the lower chamber is filled with hot water (190 degrees for this recipe), which travels to the top in three stages (the blossom, steep and agitation), which is all automated. The brewed coffee then filters through the bed of coffee grounds into a container.

“You can dial in the expression you want to take out of each cup of coffee,” Bombeck says. “If the recipe is composed of time, temperature and agitation, and you don’t get one of those right, you don’t get an optimal brew.” Drip coffee is great and all, but in 60 seconds, the Steampunk makes coffee with a distinct palette that’s surprising. “Coffee can taste like that?” you’ll say.

“The point isn’t to take the artisanal factor out,” Bombeck says. “I like to think that it takes the tedious nature of artisanal things and really streamlines it, so that it’s, most importantly, repeatable each time.”