People are always remarking on how cool it must be to be a "gatekeeper" of the music scene here, to which I gotta say—yeah, that's not me. If anything, I'm more of a deep-sea fisherman—casting a wide net and hoping for the best. With a scene as diverse as ours, with a history like this one, with new music and places to hear it emerging all the time, there's no one gate to keep. With this diversity in mind, I decided that this music issue should attempt to zero in on the new, the old and the game-changing things going on in SLC's music scene.

Our growing city is no stranger to the gleam of newness. That also goes for new rock bands making a racket around town, bands made up of newbies in the scene and longtime staples. There's also a roundup of actual new buildings to visit for good music, and whether it's late night dancing you crave or deep listening rooms, there are innovative new spots to do it all.

We also highlight a new recurring night of hip-hop, featuring up and coming artists from up and down the state, which is the brainchild of one of SLC's longest working and most impactful DJs. We highlight another scene pillar, an electronic artist who's been experimenting with synths for 15 years, in an article featuring other women making our scene brighter, more exciting, and stronger one night of music at a time.

All of these facets of the scene have a stake in what our special issue addresses: financial stability for working artists in SLC. Local venues—both established and new to the game—play a pivotal role in whether the musicians and artists who soundtrack this city can continue to do so. Dialogue around this issue is increasing among music makers and lovers around town. Here's to hoping our cover story inspires even more conversations about the value of music in SLC—value which this issue definitely makes evident.

Labor of Love
Music scene locals address how to make it sustainable for people to create their art.
By Erin Moore

With the recent advent of an Artist Town Hall [see our Feb. 27 issue], it seems that folks across the musical spectrum in Salt Lake City are concerned with how to best sustain and grow our music scene. Though it's always been a scene brimming with talent and innovation, the consistency of it stutters and starts—people move away, people stop playing. There are many reasons why, but longtime local musician and show organizer Dave Payne, pictured, names the pattern of these problems best, noting that the line between a labor of love and just plain labor is very real and important. "If [artists] are suffering, it's called labor," he says. "If they're having fun, it's called art." 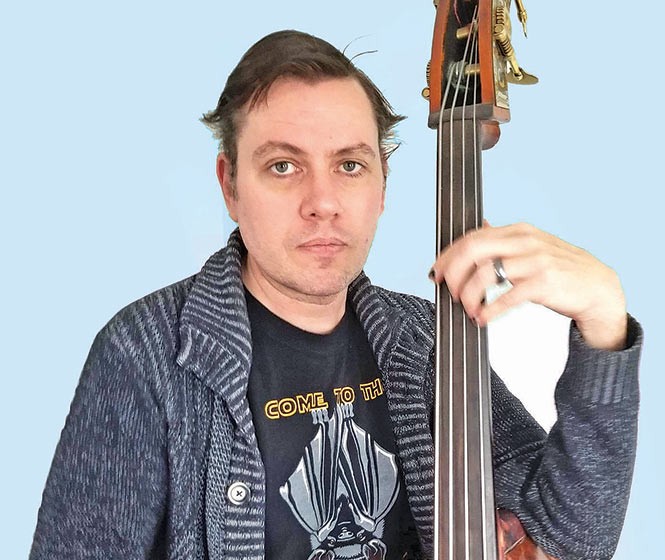 By "suffering," he means the effort it takes to accomodate a club's schedule, to load in equipment, to get by potentially without the safe space of a green room and with a few drink tickets to their name. "That is not all fun. There is some pain and labor involved, sometimes much labor," he says. "The line between art and labor is very firm, [yet] very hard to place. I take the hard line—if I'm expressing myself and having fun, I don't care who's capitalizing on that. If I'm suffering, nobody else should be capitalizing on that. That's called exploitation."

While there are places for artists to just play and have fun, such as the rather unicorn-like nights at the Twilite Lounge Payne organizes and plays in himself, it still follows that they can also want to get their name out there at bigger gigs, opening for touring bands and getting paid for it. Payne admits, "Regarding arts and culture, pay is a dirty word, 'cause [art] is priceless. But profit sharing is not a dirty word."

While that may be true, artists don't always see those shared profits after playing shows. Local artist, Madison Donnelly, who's played in multiple bands and helped to book shows in the past, confirms that sometimes it requires approaching the venue and "hounding" them to get paid, but that this could all be resolved with a dose of transparency. "I think being more open and transparent about how that [payment ] process works would be a really cool way to make that a better relationship," Donnelly says, "where we're aware of what cut we're getting at the beginning, and maybe how much the door made, how much of that we're getting."

Payment doesn't just go toward compensating the labor of playing a show, but is vital for a band's longevity. Local music maker and show organizer Joey Mayes, who hails from Memphis, Tenn. and later Provo, says, "It's an excellent way to save up for recording, pressing records and touring. ... Unless you're already financially set up, the money you make from playing [live] is really the only source for all those things. With that in mind only the bands who are well off can get out there. There is a lot of music here that never gets heard anywhere else."

Payne also noted this inequality between less well-off bands who need money and those who don't, saying, "I do believe that cold, hard cash in the hand of the artist is absolutely crucial to the scene, unless you're trying to have a scene of only rich people. To not get the money into the hands of the artists is like saying, 'All poor artists, you should disappear.'"

Pay also impacts touring acts. Local musician Peter Worden cites one instance from some years back, where "two bands at different shows came through but didn't meet the overhead and didn't get paid"—a practice known as "pay-to-play." Though this was years ago, Mayes confirms that instances like these have haunted SLC's reputation, at least in his out-of-state-reaching punk-rock circles. "Word spreads quickly, and so Salt Lake wasn't really on any of the great touring circuits." With an already isolated geographic position, SLC can't afford to fumble foot traffic from touring acts. And if locals aren't making the money to tour themselves, what's left is a little island, with a vibrant music scene talking only to itself.

Another obvious obstacle to SLC's support of musicians is Utah liquor laws. "I think that every city is more culturally diverse than its infrastructure can handle," Payne says. So while we wait on Utah law to loosen up—and for more venues to open—we have to work with what we've got. That means working hard to put on shows at bars, like he does, but also including more locals at big shows.

"This is the single mind-blowingly, ridiculously easy way to foster the arts, foster new art, support existing art, generate money, strengthen the scene," Payne says. "It is the absolute answer, I believe—have a culture, attitude and ethical responsibility to have locals open up for every out of town band." This approach, he argues, would expose those who show up for the big touring act to the equally talented (or maybe better) locals, generating new fans and more turnout for locals-stacked shows—and thus more local music happening all week long.

And when it comes full circle, back to those opening locals getting paid so they can continue creating music? "You take what you can get," Payne says, "but the first way to get a better world is by talking about it."