An Evening in Canterbury 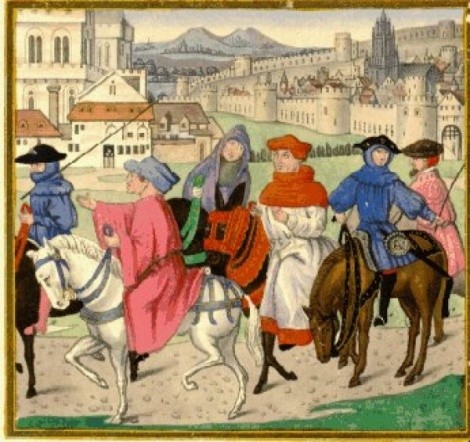 Sword fights, half rhymes, chivalry, lust and tall tales: Welcome to the world of Geoffrey Chaucer. Bringing The Canterbury Tales to life at the Murray Theater, Utah Dinner Show’s first performance—An Evening in Canterbury—will not only stage scenes from the Middle English classic but also literally will immerse audiences in them.

Set in an inn along the pilgrimage route to Saint Thomas Becket’s shrine, Canterbury Tales weaves travelers’ stories and creates a realistic account of that time. The host innkeeper offers a free meal to the traveler with the best story, thus spurring passionate accounts from characters representing a spectrum of society. Chaucer’s magnum opus is poignant and beautifully written, mostly in iambic pentameter.

At rehearsal a week before showtime, McKee—in his first full production as director—subtly connects the characters’ easy rapport with how he wants his enthusiastic community-theater actors to perform them.

“Everyone is here because they want to be,” says McKee, adding that they’re rehearsing tirelessly. He confesses that they have about two weeks fewer rehearsals than he’d like, but he’s confident it will come together nicely.

Guests will line more than 20 banquet tables, each seating eight people, and interact between “official” scenes with in-character actors, like the Pardoner, Friar, Miller, etc. Throughout the evening, the Innkeeper will call upon one of the four storytellers—the Knight, Wife of Bath, Pardoner and Miller—each after two food courses. The tales are translated into modern English, with only the Knight’s tale abridged.

Tomassian and McKee choose these of Chaucer’s 24 completed tales because “Chaucer is somewhat inappropriate for all audiences; these are the most appropriate.” Tomassian says. And the tales that were chosen are different, and evoke an array of emotions.

The Knight’s tale is a tragedy verging on heroism, the Wife of Bath’s is fairy-tale like, the Pardoner’s is a thriller/horror and the Miller’s is a comedy. Each character tells his or her tale with other actors depicting it in pantomime. Afterward, however, there’s technically no offstage. Mike Nilsson—the Miller—and others will file back into the audience, taking on their main roles.

In rehearsal, despite being ill, Nilsson is funny and flamboyant, chatting in the Miller’s Middle English dialect. “You can tell a lot about a character by the story they are trying to tell,” he says. He’s striven to ascertain the Miller’s life beyond his tale so that when he’s interacting with the audience he’ll be authentic, witty and—above all—engaging.

“Traditional theater is obsolete,” interactive coach Elias Caress boldly states. “Shakespeare is not impressive when you can go can watch Avatar 3-D. But even that doesn’t compare to interactive theater.” Caress means that beyond performances that are impressionistic, the audience is pulled in as part of this play. For those who desire this interactivity, Caress—who’ll also play the Friar—offers, “Take a few minutes beforehand and dream about what your life would have been like.” In general, he encourages this audience to “just suspend your disbelief and pretend that everything is real. Just have fun.”

Though interacting with the show and wearing a costume are optional, costumes are included in the admission price. Starting Nov. 1, ticket holders can swing by Wright Costume (4874 S. State, Murray, 801-266-5999) and select their outfit. Though not of Chaucer’s time period, Wright’s selection of Renaissance-era costumes include wenches, henchmen, kings, queens, monks, etc.

So, raise your chalice, give three cheers and celebrate Chaucer with merriment and fine food for a unique evening.