An Obituary for Bricks 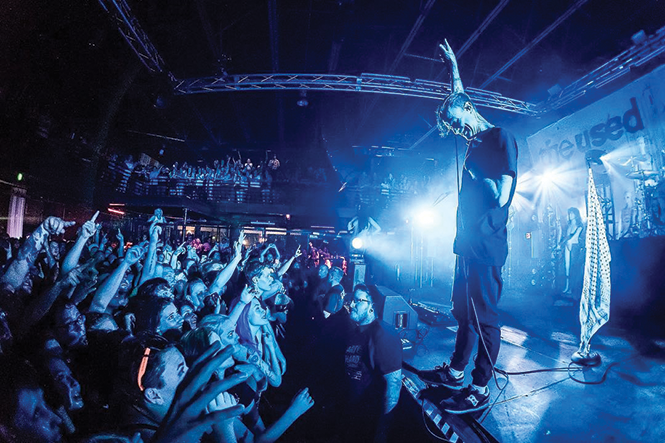 Another storied venue in SLC has bitten the developmental dust: The Greek Station, a.k.a In The Venue, a.k.a Club Sound, a.k.a Bricks, has closed down, apparently to make way for luxury condominiums or something else built for people who don't even live here yet. In the days since the news started spreading, the venue's history has already inspired reminiscence and mourning online by people who grew up going attending shows and events over the past 20+ years at the corner of 200 South and 600 West.

The venue's appeal was always strong, even though one local, Caitlin Dunn of Centerville, remembers there was a 50/50 chance of leaving any given show with something stolen. Bricks featured split rooms—later known as In The Venue and Club Sound, respectively—that hosted many historic shows, and was all-ages friendly despite selling alcohol for those 21 and up. The slightly larger In The Venue was home to the first concert yours truly ever attended, in 2009, where at 14 I watched a band called The Academy Is... among other hot, sweaty teenagers, under orange, sweat-steamed windows. Later, I went with my childhood best friend for her first show there, to see The Kooks. For both of our rural Utah-raised teen selves, they were eye-opening nights far from home that opened up a newer, wider world to be explored.

Much before my time, Trevor Hale, of the local band Milk Money, lived with all his musical friends in the Artspace apartments circa 2003-ish, and haunted Coffee Under the Bridge—which was owned by a member of The Used, who kindly got them into shows. He recalls the great, albeit cramped set-up: "There were so many times that I walked up only to say out loud, 'Holy shit, they're putting this show in the small room? That's a terrible idea, but it's going to be so much fun!'"

As recently as 2015, Hale played a similarly chaotic set there, featuring three back-to-back appearances with three of his old bands (Cherem, Tamerlane and City to City) for a benefit show. He recalls the set-up on stage being perfect for sneaky stage dives. Now, he says, "I think about how I'll never get to stand on that stage again."

As The Depot began taking all the "classy" shows and The Complex gave promoters more venue options, Bricks stopped making sense. Remodel after remodel made the space awkward, and the parking situation was bad. "The big side couldn't hold as many people as The Complex, and the little side was too big for bands looking for an upgrade from Urban Lounge. I figured it wasn't long for this world, but a huge part of me kept holding out hope that someone could make it work," Hale says.

Local jack-of-all-trades Tristan "Spazz" Southwick came up in the show production world after spending years at Bricks starting in his late teens. An industry man who's spent time bartending and DJing, Southwick recently landed a coveted permanent position with the show production company Upstage after years of freelancing with large-scale production companies like Showgear, which shares an owner with Bricks. That owner, Tom Taylor has been using the venue for the past year or so to house Showgear's equipment, before recently enlisting Southwick to help move it all into storage. With the show production industry as stalled as shows themselves, it seems that Taylor made the difficult decision to cede the space to developers, probably to save his other business in Showgear.

Southwick was glad to get the tip about Bricks' closing, both for the now-rare occurrence of a gig but also for the memories. "I've known the owner for a number of years," he says, "since I was a young kid, so it's kind of an interesting honor, I guess you could say—since I've been going there for so long—being able to be part of its final operations."

When disassembling the place, Southwick found a memento in some stagehand literature left up in the rafters, a fitting parting gift from Bricks to a stagecraft aficionado. Now, he's in talks with the owner and fellow Bricks lovers about getting some bricks from Bricks to be signed by locals in the EDM scenes—and perhaps band scenes from the venue's past—to auction off for a TBD good cause (one hopefully benefitting out-of-work industry folk like himself). And though it may seem sad, Southwick thinks the change is due to the area, which he notes suffered after Project Rio Grande. "Even though it's part of history, things need to change and grow," he says.

For his part, Trevor Hale is still worried that small bands like his will never be able to play on a stage like Bricks' again if venues keep shutting down. "Maybe in 2022 we'll be back to coffee shops and trying to trick warehouse owners into letting us rent something for a 'small gathering of friends,'" he quips. Whether that's our reality in two years or not, one thing's for sure—new venues and the industries around them will rise back up, brick by uncertain brick.