High fashion with a horror twist 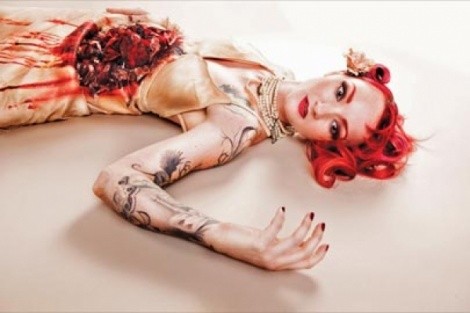 Andrea Hansen, also known as Pretty Macabre, has been designing clothes since grade school. She got her start in Salt Lake City’s fashion scene about three years ago and has made her mark with her steampunk- and horror-inspired high fashion. Her clothing is morbid and macabre, but Hansen manages to make monsters, blood and guts look chic and couture. Her work will be featured at “An October Evening” (Oct. 27, Salt Lake Masonic Temple, 650 E. South Temple, Salt Lake City), a Halloween-themed art show that will offer short films, dance performances, art, photography and music.


When did you start designing clothes?
It began back in high school. Being a dancer, I always wanted to create new dance costumes and dress up my everyday style. I began crafting my own style of clothing and altering other garments to become what I envisioned.

Did people think it was strange when you gravitated toward macabre-inspired high fashion rather than “traditional” high fashion?
If anything, people expected it. I have always been into things morbid and macabre. I have always loved horror movies and dressing up. Even when I tried designing ready-wear fashion, it was always a little on the costume side. It’s also a lot easier to be creative with costuming. I can come up with or re-create so many different characters. I love it.

What are the steps you go through when creating a piece?
I usually think about something I want to create, and then gather the tools—like fabric to make the piece—before I finally start draping and putting everything together. It’s a lot of trial and error, and is kind of like one big experiment.

What was the most challenging costume you’ve created?
My “Let Them Eat Cake” and “Bride of Frankenstein.” I hand stitched the entire bride costume. There are over 25 yards of tulle in just the bottom half, which was cut into strips, hand-gathered and stitched on. It was a very time-consuming piece, which made for raw fingers and sore hands, but was so worth it. Victorian costuming is always challenging, as well; they are so elaborate and detailed. I’m amazed that they were able to create such beautiful and extravagant gowns back then. Women would wear them with such etiquette, as well. Gorgeous!

Do you think elaborate fashions should re-enter the mainstream?
I find it quite fascinating that people used to wear these big gowns daily. I don’t think it will ever be mainstream, mostly because of the comfort factor. It can be incredibly painful and uncomfortable in some of the gowns. Not only do they weigh a ton, but they also can be restricting for movement. I love re-creating them, though! It is so fun to dress up super fancy. If I could, I would probably wear big, fancy skirts and tight-laced corsets every day.

What do you draw inspiration from when designing a look?
I’m hugely inspired by all things morbid and macabre. Also, I love historical-type costuming—anything Victorian, Baroque or super-fancy. Movies and different artists play a huge roll, as well. Everyday things in nature and all around me can spark a new design.