Andrea Jensen looks at alterations beyond our control in Entropostasis 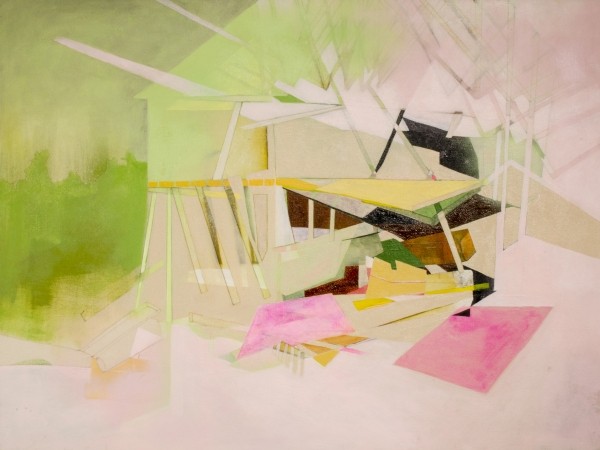 The environment provides rich material for artists these days, especially in the many ways humans have tried to structure it, and the relationship of human structures to the natural world. In the latest exhibit at the Projects Gallery (formerly Locals Only) at the Utah Museum of Contemporary Art, Andrea Jensen’s mixed-media paintings look at building forms in flux amid forces of decay and degradation.

“So many of our environmental issues stem from cultural and economic issues, and they are increasingly interconnected,” Jensen says. “This interconnectedness leads to all sorts of suffering. Internally, it leads to desires, control, anxiety, and externally [to] climate change and violence.”

She even coined a word for the state that became the title of the exhibition: “Entropostasis,” combining entropy (a state of decay) and stasis (a static state). “I believe that the tension ‘entropy,’ the decline or destruction of something, and ‘stasis,’ static or unchanging, is at the root of human suffering,” Jensen says. “Ultimately, neither of these concepts are in our control.”

Jensen, a native of Illinois, showed at Finch Lane Gallery in 2013, but she notes a difference between these new works and those earlier pieces. “These paintings are much more architectural than my previous work, and for me, reflect a more centered focus,” she says. Jensen lost a child in infancy in August and says the effect it had on her, “and how it corresponded to the overall idea of my work, resulted in a very driven focus.”

Her work tackles environmental issues, but, she says, “this is the larger picture. At its core are my own personal and recent life events. My own loss has showed me how vulnerable we are in this life, despite the structures, physical and mental, we try to employ for some attempt at control.”

Her choice of materials is intriguing, as it also comments on the theme. “I like to use pieces of found materials to reference our surroundings,” Jensen says. “Our relationship to others manifests itself in our interaction with the environment. This relationship with our environment is what I would like to confront through my work.” In the painting “Something Destroyed, Something New,” for example, the implication is that destruction is the first step in the process of renewal, or rebirth.

The color palette in her paintings—full of bright, sometimes primary shades—is emotionally vibrant and evocative of the world of nature, yet its contrasts also evoke conflict, the broad sweeps of nature’s brush, especially in tandem with her sometimes jagged lines.

“Compositionally, I want to bring a tension with structure and chaos, horizon lines that get lost, fragments strewn about,” she says. “Often, I flip the painting upside down or to the side at some point and leave it that way. Visually, this throws off any grounding ... making the viewer question what is really stable.” This disorientation mirrors the violence that sometimes occurs in nature and the wreckage the human

structures themselves sometimes incur.
“The paintings reference buildings that have suffered through one of the ‘super storms’ that have hit across the world in the past couple of years,” she says. “I like the idea that these man-made structures signify a loss of control, of impermanence, but also our attempt to control the environment, resulting in excessive carbon emissions, resulting in these storms that destroy these structures—a circle.”

The Projects Gallery exhibition space, on the upper level of UMOCA, was, from its inception in 2011, designed specifically to showcase work by artists working in Utah. It has not only provided a number of local artists with exposure to a wider audience, but also helped the museum address themes that strike a chord locally.

Rebecca Maksym, UMOCA’s associate curator, says Jensen’s work reveals “how the impermanence of both natural and built environments leads to the formation of future landscapes, and I think her neologism of ‘Entropostasis’ is a brilliant way of linguistically conveying the circular nature of these concepts, such as life and death, progress and decline.”