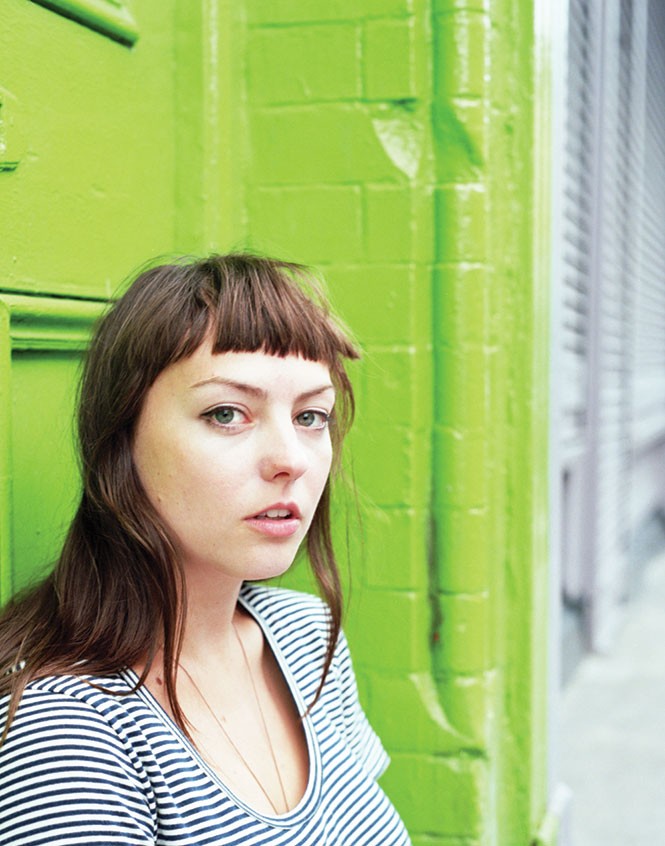 Angel Olsen has had a big year. Her most recent album, Burn Your Fire for No Witness (Jagjaguwar), took her to a level of exposure she had not yet experienced in her short career. The album, her second, was released in February 2014, and landed on many critics' best-of lists for that year. Olsen continues to tour on the strength of those songs, which are sometimes sweetly contemplative, other times hooky and aggressive, but always clear-eyed and powerfully stated.

Now, 20 months after Burn Your Fire's release, Olsen finds herself at the "what's next" phase of her career.

Olsen is in the middle of a short tour that took her first through Europe and now through the United States. It's her first set of shows after she took an extended break, which she says was needed. "We spent 120 out of the last 365 days just playing shows," she says. "I was losing my mind—not sleeping well. And when you're on tour, you gain weight and drink beer. You're just out of it." she says. "So this set of shows was put here to do one last swing before I really settle down for fall and winter and start recording."

But lest fans start marking their calendars for a new release, Olsen says she's still not sure what's coming next. And that's fine with her. "People expect you to always just shoot stuff out, and I really don't want to do that," Olsen says. "I don't want to make it turn into this awful machine that I don't have control over."

One thing Olsen has learned in playing to larger audiences is that trying to make everybody happy is an exercise in futility. Olsen seems to have taken that fact in stride. "I don't need to give [fans] everything they want," she says. "It's not about them. It's about making art that I think is good and not getting distracted by what they want. ... I love that people can vibe in to what I'm doing and really be reached by it, but if it doesn't happen in the future, let's not all be hurt by it."

Despite the uncertainty of her situation, Olsen is still largely in control. She has a solid year or so of touring behind her and is now more comfortable than ever playing with her band, which she assembled in 2014 after the album's release.

Burn Your Fire was the first time Olsen had incorporated a full band into the recording process, and the process injected songs such as "Forgiven/Forgotten" and "High & Wild" with a fresh, jangly power-pop energy without covering up Olsen's singular vocal range. It was a notable departure from Olsen's earlier work, known for its spare arrangements that relied mainly on the merits of her earthy vibrato and unflinching lyrics. Her first EP, Strange Cacti, was recorded in her kitchen. Her follow-up LP, Half Way Home, was more produced, but featured only subtle backup arrangements.

Burn Your Fire is a stark contrast, Olsen says, but it's also a natural progression for her. "I finally understood how a band's sound worked, and I let that into my style of writing," she says. "Part of it was that I was listening to new music as well. I was listening to [New Zealand cult indie band] The Clean, and I wasn't listening to folk standards from the '60s anymore. ...To me, it's a really natural step, and to other people, if they hear two recordings side by side, it's really drastic."

What remains are her lyrics. Olsen is skilled at turning a phrase. Her tongue-in-cheek ode to the boredom of solitude "Hi-Five," captures the inherent narcissism of two lonely people. "Are you lonely too?" she sings. "High five! So am I!"

Olsen often relies on the language of heartbreak, anxiety and loneliness. She seethes in "White Fire," a mid-album guitar-picking rumination that pushes seven minutes: "If you've still got some light in you/ Then go before it's gone/ Burn your fire for no witness/ It's the only way it's done."

But Olsen says her lyrics, while confessional and introspective, aren't usually autobiographical. "They seem personal, but it's not this thing where I'm having an open therapy session with myself in front of an audience," Olsen says. Still, Olsen bases her lyrics on truth, if not always on personal experience.

"I have all of these thoughts all the time. Some of them, I think, are realer than others. Sometimes when you write them down you make them real in a way."

The key, she says, is not to force it. "My fear is that I'm going to make pop music that isn't for me. As a writer, you know when you're forcing it. It's clear to you—it may not be clear to anyone else."