Animal Activists Fight for Their Own Rights

Some Utah animal advocates fear being put in a legal cage. 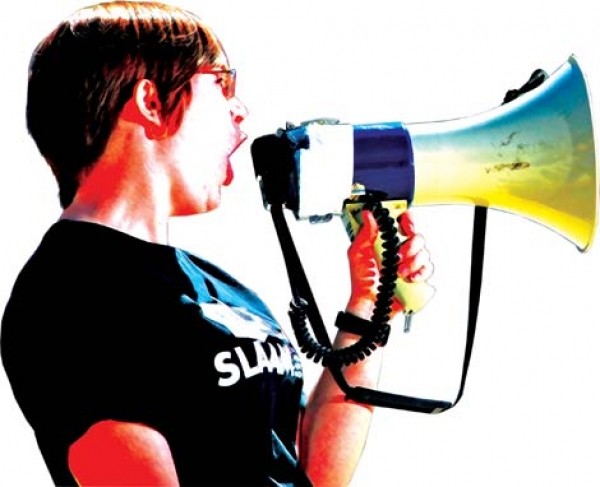 In June 2008, Jeremy Beckham took a day trip from Seattle to Vancouver, British Columbia, with his girlfriend and brother to visit famed Capilano Suspension Bridge. The longtime Salt Lake City animal-rights activist had no problem entering Canada, but his name was flagged by the U.S. Customs and Border Protection when he returned.

“They brought me in a separate room, so it was clear they were singling me out,” he said. He gave the agent his name, told him he was a student at the University of Utah and that he was just visiting Canada as a tourist. “Then [the agent] said, ‘What student groups or political organizations do you belong to?’ ” Nervous already, Beckham was now alarmed. Why should his political beliefs have any bearing on his re-entry?

Beckham, 25, refused to answer the question, and all others.

The agent asked if he was refusing to cooperate with a “national security investigation.” Beckham’s answer was not what the agent wanted to hear: “I’m not refusing to [explain] why I was in Canada, [but] I’m not going to answer questions about my political beliefs.” Beckham was cuffed, and he recalls the agent saying, “You can sit there until you’re ready to answer some questions.”

He sat handcuffed for an hour or more. Eventually, a “good cop” with a kind demeanor—to contrast the previous brusque “bad cop”—came into the room and uncuffed Beckham. He asked the same questions as the first agent and Beckham explained, for a second time, his trip to the Capilano bridge.

Twenty minutes later, he was free to go.

It’s not clear whether Beckham was listed in the FBI’s Terrorist Screening Database, or “watch list” as it’s frequently called. Beckham has never been charged with any so-called “eco-terrorism,” but people he knows have, and activist associates of his have been convicted of picketing-related charges. Beckham believes the government hypes the threat of animal-activist crimes in order to disrupt the entire movement and that merely being an animal activist can make you guilty by association. Beckham and others believe animal exploitation is the moral equivalent of human torture or murder, and they’re incredibly earnest and uncompromising in their beliefs that breaking the laws to free animals is similar to the Underground Railroad.

"They brought me in a separate room, so it was clear they were singling me out. Then the agent said, ‘What student groups or political organizations do you belong to?’ ”

Agree with them or not, understanding their motivation is key to understanding tactics that some find unsavory: picketing at animal researchers’ homes, for example, or publicly praising illegal mink releases. While some activists have purposely violated the law in defense of animal rights, those who are not willing to cross legal lines face anxiety-inducing quandaries: When does free speech become illegal support of others’ crimes, and what are the consequences of being an “eco-terrorist” sympathizer?

Law enforcers from the FBI down to Salt Lake City Prosecutor Sim Gill remind these activists that ignorance of the law is no excuse for violating it, and yet refuse to issue legal opinions that clearly distinguish illegal behavior and free speech. An FBI official recently told City Weekly that the activists have nothing to worry about if they “don’t push the envelope.” But activists are almost sure to keep pushing. In which case, they may face more detentions at the border, FBI informants in their midst and more revisions to the legal understandings of free speech and assembly.


Peter Daniel Young, 32, is certainly the most prominent animal liberator/convicted “eco-terrorist” in Utah. The son of a radio disc jockey, Young was born in California and mostly raised in the Seattle-area community of Mercer Island. Already a hardcore music fan and Straight Edge kid—meaning he loved aggressive, angry music but disdained drugs and alcohol— Young became only the second vegan in his high school and hasn’t eaten meat or dairy since, not even in prison.

The roots of his radical respect for animals can be traced to John Robbins’ markedly unradical Diet For a New America television special from 1992, which Young saw in a high school class. The 60-minute film barely mentions animal rights and focuses on Americans’ unusual levels of meat and dairy consumption relative to other countries. There’s just a brief scene about the conditions of animals on factory farms, but it’s presented as more of a gross-out to eaters than an argument that animals deserve better treatment. Nevertheless, those images stuck with Young.

Young graduated from high school in 1995 and continued his practices of picketing businesses that exploited animals. He quickly grew intolerant, however, of the slow pace of progress and moved on to criminal acts of activism, often referred to as “direct actions.” “We were under the illusion that this [picketing] was building up toward some crescendo where all the animals were free, and it just wasn’t working.”

His first illegal direct action was to smash the windows of a Seattle ham store and paint “Meat is Murder” on the walls. That made the news, as did other crimes he committed anonymously. Before long, though, both cops and news crews recognized him as an activist. He felt “marked” and needed anonymity to continue his illegal work, so he headed for the Upper Midwest in 1997.

“The road trip that lead to my indictment was to be my last stop before college,” he said. “I wanted to do one last, great thing.” That thing was to assist in the release of thousands of mink from their cages at six ranches in South Dakota, Iowa and Wisconsin, sort of an epicenter of mink farming. Wisconsin is the top producer of mink pelts with 71 farms, according to the U.S. Department of Agriculture. Utah is the second highest, with 65 farms.

Mink are among the best animals to liberate, Young says, because they’re scrappy survivors who have the instincts for life in the wild. The fur industry disagrees about minks’ chances of survival after a lifetime in a small cage—which is usually only months long—never having time to run around, much less hunt or swim. Each side has anecdotes and scientific research to back their mortality/survival claims.

Young and a co-defendant were caught—their red Geo Metro with Washington plates had been spotted at mink farms and was seized by a Wisconsin officer—but he was not indicted until the next year. Young went underground and stayed on the lam until 2005, when he was arrested in San Jose, Calif. He pleaded guilty and was sentenced to two years in prison and $254,000 in restitution, most of which went unpaid because he stopped making payments after his one-year probation expired.

Young became a convicted eco-terrorist, though he never intended to nor actually did hurt anyone—except financially. He sees mink releases as akin to interrupting a rape in progress, so he doesn’t have any mixed emotions about harming animal-exploitation businesses. He says he’s now engaged only in above-ground, legal activism because, as a “marked” man, he attracts a lot of law-enforcement attention.

Young also drew attention of animal-rights activists, becoming a “rock star” among local groups, at least according to a woman who once dated Young and is now suspected of working as an informant for the FBI.