The lost art of household crafts 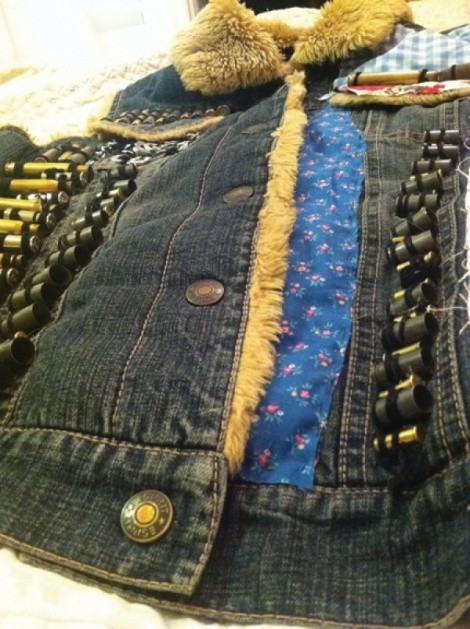 In the digital age, there’s been a backlash in the arts by artists striving to hold on to older forms, genres and media, whether it’s film photography, live theater or the spoken word. Anna West would like her art to preserve an older way of life. Even the phrase “domestic arts” sounds archaic and quaint, and West’s show My Dead Friends is dedicated to practitioners of the domestic arts: past, present—and, she hopes—future.

The inspiration for the show comes from West’s upbringing. “I was raised by rowdy cowboys and slept outdoors in a sleeping bag three nights a week from age 2 through my 20s,” she recalls. “My grandmother was the main influence in my life. She lived through the Great Depression and sent her husband into combat in World War II.” Five of the items in the show, hand-woven shawls, were made by “dead friends”: her grandmother and a family friend who taught West to sew as a child.

The beaded brown-and-cream wedding dress in the show, titled “Ain’t No Hothouse Flower,” was inspired by another family friend who taught her to crochet while in high school. “She said to me once that her dad used to tell her, ‘You ain’t no hothouse flower,’ and that statement has always stuck with me.”

The works in the show include clothing, giant doilies, small photographs pasted onto flooring samples with inscriptions from ’80s songs and quotes from people like Bob Dylan and Allen Ginsberg. Photocopies of her grandmother’s recipes are on the opposite wall, some of which she made for the opening, including a tomato-shrimp Jell-O ring. West says, “I see food as an art form, and I felt making old-time food was the punctuation on my artistic statement.”

Doilies, some 5 or 6 feet across, appear a bit surreal in this scale, but West says they are the most important aspect of the show. In addition to domestic symbols, they are intended as a tribute to one of her favorite artists, Kiki Smith, who took antique doilies and screenprinted them as “celestial bodies.” “That’s how I see them,” West explains, and mounted on the wall they seem like constellations of thread.

West’s “cowboy/masculine side” is shown in denim jackets covered with bullets in the series called Bullet in My Shoulder, named after a song by country singer Frankie Laine.

To West, the domestic arts are about more than femininity and home life; they are an aesthetic, an ideal of beauty. “To me, they represent being a great hostess—offering a wonderful meal, beautiful home and flowers you arranged yourself as a way to embrace the people you love. I love the domestic arts, too, because when I make something in a way it was made historically, I feel a kinship that spans decades, even centuries.”

While “domestic arts” might sound like a sexist definition of women’s roles in our day and age, she notes that now that women can do everything, men don’t seem as invested; the roles aren’t clear for either gender. “I guess I’m torn on feminism,” this feminist says. “As I juggle these things, I spend a lot of time thinking about what life was like for the homesteading woman when the white ‘man’ first came out West. To tell the truth, I wish I had been one of those women.

“I don’t think that I have the power to preserve the domestic arts,” she says. “I know that I am already an anachronism. If anything can save the domestic arts, it’s the economy.” The craft movement has seen an upsurge in recent years nationally as well as locally, with events like Craft Sabbath and Craft Lake City, in which she participates. The economic downturn has driven some people to embrace the do-it-yourself method, but it’s a small niche in a country that craves convenience.

“I see a dearth of domestic abilities in my friends, men and women alike,” she explains. “Among Gen Xers and younger folks, the ability to cook a basic meal, scrub a floor and sew on a button seems to be quite rare. I love my friends, but I think their lives would be more satisfying—and less expensive—if they had these skills.”

Since saving the domestic arts seems a difficult prospect at best, the show opening on Jan. 15 was organized as a wake, a festive send-off, with performances by her belly-dance company, The 14th Ward of the Rubber Room, and blues musician Christian Coleman, with Princess Kennedy serving drinks. “Why not send the domestic arts out with a bang, with themed dead orange (gin) blossoms and Keystone, sodacracker pie, rousing dance and a blues singer?” West says. “That’s the way I would like to go, myself.”