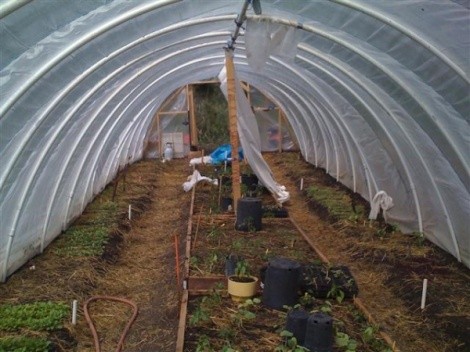 City Weekly was there as a county grading specialist and building inspector inspected the farm to be sure they were making the changes necessary to be in compliance. To meet the county demands, Calcium Springs removed a Tuff Shed, RVs, and a carport-style tent used as a cooking area.

The farmers say none of those items are "structures," and thus should be allowed. The county disagrees and ordered them removed.

Kurt von Puttkammer, a managing partner at the farm, is also an architect and planner. He says the farm is in compliance with zoning regulations, but county officials have determined otherwise.

"We've been stripped of everything," von Puttkammer said, as he and others tore down the cooking area where they stored supplies and prepared meals. "It's a really sad day to us, an incredibly sad day."

The encounter became heated as von Puttkammer asked a county employee whether a gathering of friends for a yoga session would require a permit. The employee didn't answer and referred von Puttkammer to another county official.

The farm is on private land with permission and support of the land owner.

Salt Lake County spokesman Jim Braden said Salt Lake County Mayor Peter Corroon "is very supportive of sustainable living" but some things simply can’t be done in that zone. The zoning regulations, he said, were crafted with massive public input, through proper channels that represent the voice of the people. Not even virtuous causes can violate them nor ask for special leeway, he said.

City Weekly has been investigating the farm's troubles. There's a whole lot more to this story.

Check back at the CityWeekly.net News Blog for more as it develops.