Mike Leigh explores the contentment and sorrow of aging in Another Year. 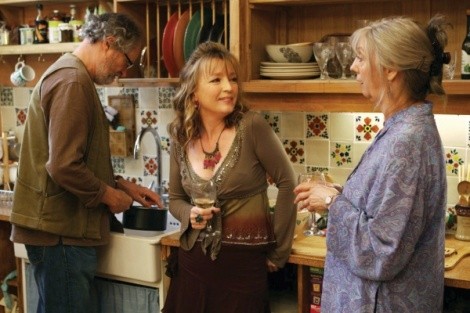 In the opening scene of writer/director Mike Leigh’s subtly heartbreaking ensemble drama Another Year, a tight-faced, 50-something woman named Janet (Imelda Staunton) visits a doctor for help with insomnia. It’s clear she’s personally miserable, though she’s not interested in delving into the reasons for her unhappiness, either with the physician or with counselor Geri (Ruth Sheen). When Geri tells Janet, “Change is frightening,” Janet practically snarls in reply, “Nothing changes.”

Janet never appears again in Another Year, yet that departing sentiment reverberates throughout the narrative. Leigh has crafted a character study addressing a particular point in life, and the particular point of view with which someone might view reaching a time when most of the patterns are long established. It’s not a story about growing old; it’s about the circumstances that allow someone to be at peace—or not—with doing so.

Over the course of a single year, broken into four seasonally themed segments, Leigh follows the group of people who orbit around Geri and her husband Tom (Jim Broadbent), an engineering geologist. Their grown son, Joe (Oliver Maltman), frequently drops by to visit; Geri’s co-worker Mary (Lesley Manville), a motormouthed free spirit, is also a regular visitor. And in one segment, Tom’s old college chum Ken (Peter Wight) comes to stay, as well. No particular event kicks the plot into some great drama, though awkwardness attends Joe’s surprise introduction of a new girlfriend (Karina Fernandez) in the autumn. They simply reveal themselves to us, in all their contentment and sadness.

The most wonderful thing about Another Year is that it finds lovely observations at both ends of that spectrum. Manville’s Mary tends to dominate any scene she’s in—both in the context of the film and for viewers—which led to a few critics-groups awards for her performance. But Broadbent and Sheen might actually be even better in roles that are far less showy; it’s not often that actors are allowed to inhabit what appears to be a strong, happy marriage with intelligence and good humor. The whirlwind of Mary’s various emotional crises may overwhelm everything in its path, but they wouldn’t resonate in the same way without the gentle, stable center of Tom and Geri.

It’s in that juxtaposition that Leigh captures something incredibly poignant about “late middle age.” Mary and Ken—both un-partnered and none too happy about it—drink away their sorrows in separate scenes opening up to Tom and Geri, expressing their anxieties at finding themselves aging and alone. Tom and Geri, meanwhile, are able to make light of exiting their youth—Geri commenting on her own “middle age spread,” and Tom remarking about his renewed interest in history now that “soon enough we’ll be part of it.” As we watch Mary flirt uncomfortably with the much younger Joe—and Ken for his part flirting with a thoroughly unreceptive Mary—we see the desperation that comes upon people who fear, like Staunton’s Janet, that “nothing changes.” And while that’s not a problem for a couple like Tom and Geri who spend time gardening and cooking together, it’s an existential black hole for Mary and Ken.

Another Year loses some of its momentum in the final “Winter” segment, which focuses on Tom and Geri helping out Tom’s newly widowed brother, Ronnie (David Bradley), whose estranged son, Carl (Martin Savage), makes a scene at his mother’s wake. Ronnie’s late introduction as a key player doesn’t allow him as much time to develop within the context of the story; he seems to exist more to demonstrate Tom’s protectiveness of his family, and later, as a target for another level of Mary’s desperation. But Leigh pulls it all back together for closing scenes that make it clear where Mary fits in with this extended family—or, more to the point, that despite her emotional dependence on Geri, she isn’t actually part of that family. As Tom and Geri’s dinner table recollection of their first years together fades into a silence that surrounds Mary, Leigh lingers on her for uncomfortable moments. Another year has passed for her—and for Tom and Geri—a year in which, perhaps, nothing changes. And we’re allowed to see how that same reality can be both a blessing, and a sorrow.