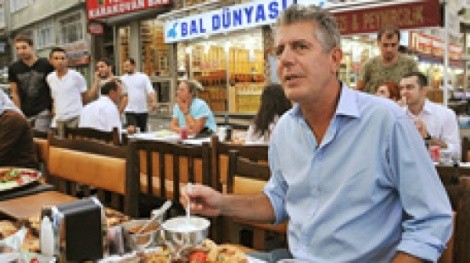 I was fortunate, when I was an impoverished grad student in Manhattan, that I lived two blocks from Les Halles Brasserie, where Anthony Bourdain was chef. It was inexpensive enough to allow me the opportunity to discover the wonders of foods like duck confit, sweetbreads, cassoulet, choucroute garnie, moules mariniéres and cheap French wines like Cahors on a university teaching assistant’s meager salary. Bourdain was just then emerging as an up-and-coming star; he’s now host of No Reservations on the Travel Channel and the author of books such as Kitchen Confidential, The Nasty Bits and Medium Raw, out this month.

I recently had the pleasure of interviewing Bourdain and found him to be deferential at times, funny most of the time, a true food lover and not at all the ass that he too often gets pigeonholed as being—mostly from people who have never actually seen his TV shows or read his books. Or, maybe we just hit it off because he’s a mere two weeks younger than I am. We both celebrate birthdays this month. Before the interview, I asked City Weekly readers and staff to submit questions they’d like to have Bourdain answer, and those are interspersed here.

City Weekly: I’d bet my last sheckle that the word “foodie” makes your skin crawl. And yet, you’re doing a live tour at venues packed with foodies. Please discuss.

Anthony Bourdain: I have a problem with the term, not the phenomena. If you’re talking about people fascinated by and even obsessed with food, you’re describing most of my friends and the way I make a living. So I think the term foodie needs replacing.

CW: You’ve probably dined on wombat in some remote corner of the globe, but you’re coming to Utah, the home of green Jell-O and funeral potatoes. Does that scare you?

AB: A little bit, yeah. I’ve heard about the Jell-O and the potatoes. That’s worrying… What percentage of the Salt Lake audience will be Mormon? How do you think profanity and drinking references will go over?

CW: You know, I think if they’re coming to the show, they already know who you are and what to expect.

CW: You don’t really cook professionally anymore. Do you miss the chaos and the camaraderie of the kitchen?

AB: The chaos no; camaraderie, yes. To be honest, at my advanced age, I don’t think I could do the job anymore.

CW: Lia wrote in to say that you’re like “The Rolling Stones of cooking.” Which begs the question: Stones or Beatles?

AB: Stones, of course. It’s all about Keith Richards.

CW: Mindy says, “No Reservations seems to have gotten ‘safe’ this past season. Could you be entertaining thoughts of a more domesticated life?”

AB: Well, I am a father now and so I probably do a few more Western Europe shows so I can spend time with my family and my daughter. But “safe,” I don’t know—we just shot in Liberia and Beirut, and we’re going up the Congo River, and just shot a black-and-white letterbox episode in Italy. I don’t think anyone can predict what direction we’re going in because we don’t know ourselves. (Laughs)

CW: A lot of people seem to be concerned about your health. They’re worried about you, Tony.

AB: Well, I had the choice of going on low-dose Lipitor or changing my diet and so I chose Lipitor. When they listed all the foods I would have to do without, I almost starting crying.

CW: Bryan wants to know if you’d consider doing a trapeze act again if it involved the topless version of Cirque de Soleil?

AB: Uh, no. That’s something my daughter should never have to see on the Internet. Besides, no one wants to see me in spandex.

CW: I saw a comment you made a while back about eating warthog in Africa, and it was really quite touching. Maybe this was “Good Tony vs. Bad Tony.” You said that a little food poisoning is a small price to pay for the generosity the village had bestowed upon you.

AB: Well, yeah. I mean, people are expressing their identity and their hospitality and generosity in the most direct way they can. And so to turn away or turn your nose up or refuse to eat something strange is just unthinkable to me. Every once in a while you take one for the team.

CW: One person asked what it’s like to have the sexiest name since the late, great Robert Goulet?

CW: Here’s a question for “Bad Tony.” Which is the greater threat to our nation: The Gulf Coast oil spill or Rachael Ray?

AB: You know, as much as I loathe her show, I think that unlike the oil spill, the cumulative effect of Rachael Ray’s work is not as bad as the spill—probably, on balance, marginally. The oil spill is all bad. I was on the Anderson Cooper show the other night talking about the Gulf oil spill, and you know something’s going on when me, Ted Nugent and James Carville all agreed.

CW: I think we can all agree that you have the best job on the planet. But, if you had to pick a back-up gig, what would it be?

Anthony Bourdain will appear live in No Reservations: An Evening with Anthony Bourdain, June 19 at 8 p.m. at Abravanel Hall, 123 W. South Temple. Tickets can be purchased at ArtTix.org.