April Is for Beer Lovers 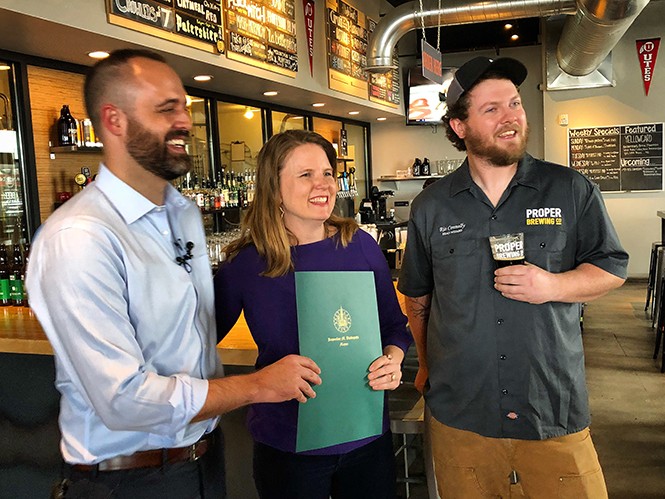 Since you're already reading this, I probably don't have to tell you that the craft beer scene in Utah is on pace to become one of the state's larger economic success stories. Over the past few years, breweries and distilleries have become viable and legitimate players in Utah's ever-evolving social and economic structure. During the 2000s, Utah saw only five new breweries emerge: Bohemian, Park City Brewing Co. (not to be confused with Park City Brewery), Tracks, Zion Canyon and Roosters' Layton Brewpub. Only Roosters, Bohemian and Zion Canyon remain; the others closed up shop or were absorbed by other breweries. This decade has seen a comparative explosion of new breweries, with 16 independent brewhouses opening since 2010. And those don't include four that are still scheduled to debut in 2018, with yet another four in 2019.

With all of this craft-beer growth, Utah cities are taking notice, using the momentum to attract new residents and tourists as they look to fuel economic development. Most prominent are Salt Lake City and Ogden. At the beginning of the month, Salt Lake City Mayor Jackie Biskupski and Ogden Mayor Mike Caldwell officially declared April Craft Beer Month. The goal is to draw attention to the growing craft-beer movement in Utah with a month of celebration and show the support for the industry.

Utah Brewers Guild's president Rio Connelly—who is also the co-owner of Proper Brewing Co., Proper Burger and the Avenues Proper Brewpub—shared his appreciation for the cities' acknowledgement as well. "I can say that we in the Salt Lake City brewing community are honored that Mayor Biskupski is recognizing the support and impact our industry has on our community," Connelly said. An active member of Utah's beer community, wearing many hats in and outside of the brewhouse, he says recognitions like this help bolster and expand craft beer's quality and availability: "We are growing and becoming more numerous thanks to the support of our fellow citizens. These ongoing relationships will continue to contribute to making Salt Lake City an amazing place to live."

Numerous events in both cities mark the inaugural Craft Beer Month, including:

April 20, 2018: The annual Fluid Art event co-sponsored by the Utah Brewers Guild and the Utah Museum of Contemporary Art. More information at umoca.org/fluid-art/

And if that's not enough for you, beginning Monday, May 4, Utahns will get even more craft-beer related events as Utah's brewers celebrate American Craft Beer Week, featuring events throughout the entire state. I'll get you that schedule as soon as it becomes available.