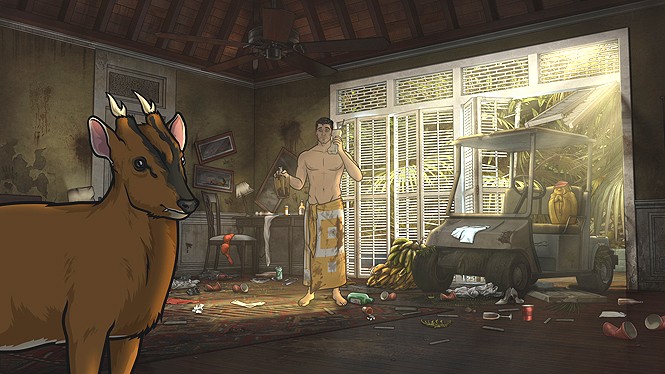 Archer
Thursday, Jan. 8 (FX)
Season Premiere: After last season's cocaine 'n' country detour, Sterling Archer (H. Jon Benjamin) and crew are back in the spy game—but no longer as ISIS, since that name's been, uh, compromised. After he's done wallowing in "cobra whiskey and lady-boy hookers," the new father (congrats, Archer and Lana, even though only one of you was aware of it) will be freelancing for the CIA. Other than that, it's business—and deliciously crass hilarity—as usual. Favorite line of the new season (so far): "Eat a buffet of dicks."

Banshee
Friday, Jan. 9 (Cinemax)
Season Premiere: The strangest action-thriller you keep missing opens Season 3 with a one-two punch of bloody violence and steamy sex—Cinemax hasn't gone completely straight. It doesn't seem to matter anymore that Banshee, Penn., "sheriff" Lucas Hood (Antony Starr) is a fraud; apparently, only a criminal can dispense justice in this town (while making felonious bank on the side). But it does, and he'll face as much hell from his girlfriend/deputy as he will enemies old (the local Amish mob) and new (an Indian tribe out for his blood). How many times do I have to tell you to just watch Banshee already?


Sunday, Jan. 11 (Showtime)
Season Premiere: No longer knockin' on Heaven's door, professional alcoholic Frank (William H. Macy) has a new liver (which he wastes no time road-testing), and Fiona (Emmy Rossum) is pushing her own bad-boy limits by juggling four men (including the back-from-the-not-dead Jimmy/Steve/Jack, who only counts as one). But of all the troubles the family has in Season 5—and there are plenty, as usual—none are more terrifying than the creeping coffee-shop gentrification of their craphole Chicago 'hood: The Gallaghers vs. Hipsters war is on!


Tuesday, Jan. 13 (NBC)
Season Premiere: NBC is burning through Parks & Recreation's final 14 episodes back-to-back on Tuesdays for seven weeks—damn, that's some cold Jerry Gergich treatment. While the perfect Parks & Rec finale actually aired a year ago ("Ann & Chris," the one where Rashida Jones and Rob Lowe left the show), at least we'll have a little more time with these characters—now fast-forwarded to the year 2017, because why not? All I want is for Andy (Chris Pratt) to reunite with MouseRat, or at least for Ron (Nick Offerman) to reunite with the Meat Tornado.

It's Always Sunny In Philadelphia


Season Premiere: A decade?! It's Always Sunny In Philadelphia is kicking off Season 10?! And renewed for two more?! Suck on that, Friends. In typically random Sunny fashion, the first episode finds the Gang on a flight from Philly to Los Angeles, attempting to break baseball legend Wade Boggs' record of downing over 50 beers each (save for Mac, who's acting as "commissioner") before they reach California. Lessons learned: Boggs' cross-country chug-a-thon record is a real thing, and It's Always Sunny In Philadelphia is still bringing it. Hard.

Man Seeking Woman
Wednesday, Jan. 14 (FXX)
Series Debut: When he splits from his girlfriend, Josh (Jay Baruchel) walks away, followed by a literal raincloud. His first post-breakup blind date is with an actual troll. Man Seeking Woman is full of such absurdist visual gags, punching up what's essentially just a comedy about a put-upon Jay Baruchel-type looking for love, aided/wildly misdirected by his far-cooler bud (Eric Andre—yeah, a stretch), who drops such romantic wisdom as "Tinder is like Facebook, but it's just, like, straight to smashing." Man Seeking Woman is cute with the potential to wear thin fast—proceed with caution.

Listen to Bill Mondays at 8 a.m. on X96 Radio From Hell; weekly on the TV Tan podcast via iTunes and Stitcher.