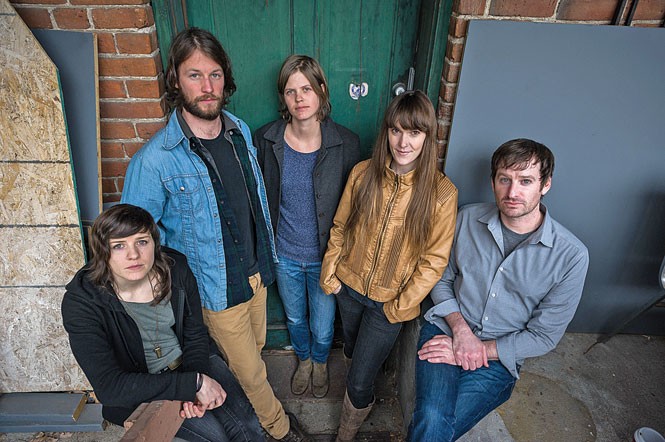 When forming a band, planning is usually a good idea, especially when deciding on a lineup and what the sound will be like. After all, if one band member wants the project to focus on metal, and another wants to see what music they can make out of old beer cans and sticks, well ... let's just say it's smart to get everyone's expectations out on the table. But in the case of Denver folk-rock five-piece Ark Life—whose debut album, The Dream of You & Me, is set for release Aug. 19—happy accidents are to thank for their formation and sound, lucky occurrences that were "very happy, and very accidental indeed," says songwriter, guitarist and lead vocalist Jesse Elliott.

For the Midwest-born Elliott, stopping in Denver for a short spell was only a side note to a bigger move to New York City in 2013 with bandmate Lindsay Giles. Elliott helped Giles with her art gallery, and the two of them played music with various local musicians, and then, "We just stayed," Elliott says. "First, we stayed an extra month, and then we stayed another extra month, and then after a while, we were like, 'Oh, we're not really leaving for New York, are we?'"

The creation of Ark Life's sound and lineup was similarly organic. Elliott and Giles were joined by bassist Anna Morsett (whom Elliott had played with in on-hiatus Brooklyn rock outfit These United States), guitarist Natalie Tate and drummer Ben Desoto, all folks they knew through "brief encounters in our past lives," Elliott says.

Once the lineup was finalized, Ark Life settled on a sound that was simply built around "what was fun," Elliott says. "Everybody just played what came naturally to them. [Ark Life] was the only group I've ever been in where there actually wasn't much discussion about what we wanted it to sound like." That sound turned out to be a warm, soulful and slightly twangy style of folk rock that's joyous and communal, with Elliott's leading vocals gorgeously backed by the three-part harmonies of Giles, Morsett and Tate, as well as piano and guitar.

But in the 16 or so months that Ark Life have been touring and making music, the only ways that listeners could hear any tunes was by getting a Daytrotter account and listening to the band's excellent April 2013 session, or by catching isolated singles here and there online. Ark Life took their time in putting together The Dream of You & Me because they didn't want to "rush any particular part of the process," Elliott says. "And that's also something that I've never done before; I've always been pretty impatient with getting albums done and getting them out into the world, and I think we wanted to relax a little more and enjoy the process a little more."

Elliott's approach to songwriting in Ark Life is different, too. With new single "Proud of Me Out There, Mama" as one example, his lyrics explore "timeless topics of love and life and death and confusion and wandering and enjoying, and I guess everything in between," he says. While his past work was "more like having fun with the wordplay and riddles and references within songs to other songs of my own and other songs of other people," he says, with Ark Life and on The Dream of You & Me, he "tried to simplify my rambling instincts just a little bit" and create songs that were more "straightforward."

The Dream of You & Me will come after a bit of a wait for fans, but the album benefited from Ark Life wanting to find their chemistry on the road and "play a bunch live first" before making it, Elliott says. The new album is an intimate snapshot of what it's like to experience the energetic band live.

"There's a lot of different ways to make albums, but the one that we were all most excited about at the moment was to do it as live as possible," Elliott says. "So I think we really focused on making that experience as fun as possible for ourselves."