You might already be part of the Guitar Army. 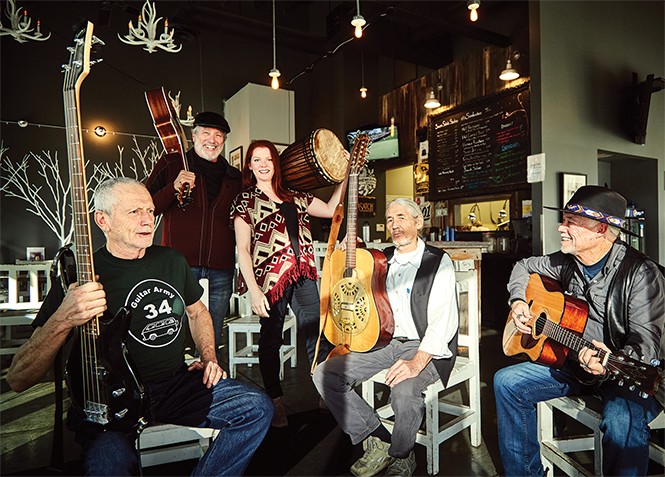 The words "Guitar Army" in a Feldman's Deli City Weekly listing strike a Pete Townshend power chord in my head. Only two days after seeing the G3 show, where famed guitarists Joe Satriani, Phil Collen and John Petrucci weaved vibrant aural tapestries with six strings, I'm primed for more. With an hour to kill before I have to pick up my daughter, I decide to get dinner and enjoy some tunes.

Surely, it wouldn't be another high-decibel shredfest—Feldman's would be an odd venue for that—but I'm ready for whatever else "Guitar Army" might mean. In my mind, the most likely scenario is that Eagle Twin/Iceburn/Smashy Smashy guitar wizard Gentry Densley revived his old Guitorchestra project. I could call him and ask, or simply feed keywords to Google and see what it spits out. I opt not to ruin the surprise—and then I do by getting on Facebook.

But when searching for information on Guitar Army, the first thing I notice on the Feldman's Facebook page is a post about a guy called Farmer John. In a high-resolution grayscale photo, his eyes are both googly and piercing from between the brim of his old prospector's hat and a beard shaded by age, weather and smoke. I'd seen him around town, living out of his truck, enough to wonder why he held a local orbit when homelessness and a vehicle seemed more suited to itinerancy. The post, timestamped 12:19 p.m., said John had been taken to the University of Utah Hospital. He'd shot himself after police towed his house-on-wheels.

The power chord gives way to a stinging, sustained blues note as I continue my Guitar Army reconnaissance. Eventually, I find guitararmy.net and its center-justified manifesto: "Musicians around the world unite. Come join the Guitar Army. Drown out the drums of war with your music of joy. ... Make music, not war."

It goes on to mix metaphors, recruiting "foot soldiers" for bands that are "your family." It posits music as a universal language, then discusses the length of days, the International Date Line and creating a "wave of joy" via the simultaneous streaming of live or prerecorded versions of Schiller's "Ode to Joy," popularized by Beethoven. While confusing, the overriding message of the word-cloud is world peace. The musical concept, however, remained unclear. The band-family structure appears arbitrary and more like a pyramid scheme, sans the financial element.

What about guitars?, I wonder as I lock my car. I notice a woman hauling an upright bass toward Feldman's. Following her in, I watch her walk by a keyboard on a stand and one man tuning a lone guitar.

A different, smiling man asks, "Are you here for the music?" I answer affirmatively; he directs me to a table for two in the far corner. It's an odd scene, as the growing cast of musicians—only two of them guitar players—check mics and wrangle cables and children while, weirdly, .38 Special and Ratt play overhead. Finally, about 15 minutes after the advertised start time, the smiley guy picks up a guitar and, in a gentle, dusky voice, sings. "I got the ragtime blues..." He plays for another minute or two before putting down his guitar and walking off. After another 15 minutes without movement, I approach him. He's Michael Feldman; he owns the joint. I'm out of time, so we exchange numbers and I promise to return. Then a woman with a guitar sits down.

Sweetly, she strums and sings, "Throw me down under a juniper tree," accompanied by a clarinet player. I decide to stick around for a minute, taking a seat at a front table near Feldman. "That's Susan Bush," he says with respect. "Have you heard her before?" I hadn't, but immediately I'm happy to have made her acquaintance.

After Bush, Hod Will, the founder of Guitar Army, rises to give an abridged version of his manifesto, which is best summarized as, "Let's just play music and take care of each other." He introduces Feldman, who tells the audience of roughly 30 about Farmer John, lying in the ICU a few miles north of us and dedicates Ralph McTell's "Streets of London" to him. "Have you seen the old man in the closed down market/ Picking up the papers with his worn-out shoes?/ In his eyes you see no pride and hanging loosely at his side/ Yesterday's paper, telling yesterday's news."

As he plays, I hear Phil Triolo's mournful clarinet from behind—he's sitting across the table from me, content to add his voice from where he is. Suddenly, Guitar Army makes sense. The audience is rapt as Feldman continues, slightly tweaking the lyrics. "So how can you tell me you're lonely/ And say for you that the sun don't shine/ Let me take you by the hand and lead you through the streets of Salt Lake/ I'll show you something to make you change your mind."

After the song, I make for the door. Walking in the cold toward my car, I think of Farmer John and hope he's all right. And I marvel at the realization that tonight I went looking for an army of guitars, but found a louder sound coming from only two.