Side projects don’t come more intriguing than the one undertaken by Old Time Relijun’s Arrington de Dionyso. His album, Malaikat dan Singa, is a rough-and-tumble collection of polyrhythms, reverb-rumbling horns, throat singing and traditional rock instrumentation; three of the songs even include his Old Time Relijun bandmates. Most unusual, though, is the fact that every song is sung in Indonesian. It’s not exactly easy listening, but Arrington de Dionyso will get your body moving and your mind spinning at the same time. Captain Captain Studios, 825 S. 500 West, 7 p.m.

Chuck Mead, Willie Nelson
The reason this show sold out in a flash is clearly the headliner, Willie Nelson. The Red Headed Stranger is a legend known for packing upward of 40 songs between opening and closing with “Whiskey River.” But country fans will want to be sure to get to Red Butte Garden on time for opener Chuck Mead. The lead singer of Nashville honky-tonk purists BR549 has spent the past few years working as the music director of The Million Dollar Quartet, a Broadway show re-creating the night Elvis Presley, Johnny Cash, Jerry Lee Lewis and Carl Perkins gathered together at Sun Studios to jam together. After helping get the show from Chicago to Broadway, Mead’s now prepping to take it to London. Somehow, he found time to record his debut solo album, Journeyman’s Wager, in 2009. And while BR549 is simply taking a break, Mead said doing a solo album was definitely satisfying. “It was really exciting to do something totally mine,” he says. “I wanted to do something that was half-hillbilly and half pub-rock.” Next up for Mead: an album of standards and perhaps more theater work. “The music business has changed a lot. You have to try a lot of different things to crack the same nut,” Mead says. “You can’t just make a record and call it a day.” Red Butte Garden, 300 Wakara Way, 7 p.m., sold out 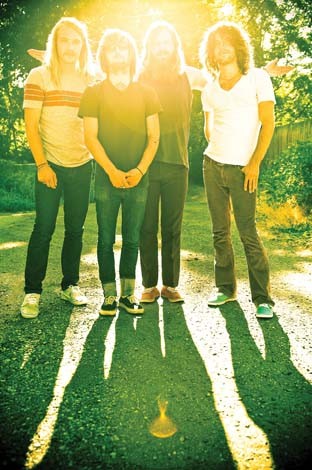 City Weekly Utah Beer Festival
What could go better with an afternoon of sippin’ and swillin’ Utah’s finest brews than a heaping slab of tunes? While you debate with your friends the merits of, say, Uinta’s Crooked Line Labryinth and Epic Brewing’s Copper Cone, you can get down to the sounds of soul crew The Futurists, the Samuel Smith Band, Wasnatch and 2010 City Weekly Music Awards winner Spell Talk. Beer and music in the sunny outdoors right in downtown Salt Lake City—what could be better? City & County Building, 451 S. State, 1 p.m., $25 advance/$35 day of

Autolux
Six years seems like a long time between albums, but when you hear the complex soundscapes put together by Autolux on the Los Angeles trio’s new album, Transit Transit, you can start to understand how much time it must take to create such tunes. Granted, much of those six years was spent on the road, touring in support of Autolux’s breakthrough debut, Future Perfect, and making fans of tour partners like PJ Harvey and Thom Yorke. But once the group hunkered down in its studio to record Transit Transit, the members found themselves exploring the sonic possibilities of slamming freezer doors, trumpets and stacks of vintage synthesizers. Put it all together, and you have a band of experimentation junkies who retain a knack for pop hooks, as well. Gold Panda opens the show. The Urban Lounge, 241 S. 500 East, 9 p.m., $10

Titus Andronicus, Free Energy
Typically speaking, the Civil War is best left to high school history classes and old men who like to put on uniforms and perform reenactments on weekends. Remarkably, New Jersey band Titus Andronicus actually found a way to make a theme album—The Monitor—loosely based on the Civil War rock, and rock hard, thanks to sing-along anthems, drunken Irish jigs and, um, re-imagined lyrics swiped from other tunes (“Tramps like us, baby we were born to die!” they scream on the epic opener “A More Perfect Union”). Opening up is buzz-band Free Energy, whose debut album, Stuck on Nothing, was produced by LCD Soundsystem’s James Murphy. Kilby Court, 741 S. 330 West, 7 p.m., $12

Efterklang, Buke & Gass
Straight outta Denmark comes Efterklang, a quartet that expands to a seven-piece for live shows, which makes sense considering the broad scope of orchestral pop tackled on the band’s new Magic Chairs album. Some of the songs are so delicately beautiful it’s got to be a challenge to recreate them live, especially in noisy environs like rock clubs. Opener Buke & Gass, with their unusual instruments (the “buke” is a six-string baritone ukulele, and the “gass” is a guitar-bass hybrid), should have no problem grabbing the crowd’s attention, thanks to their intricate series of foot pedals and homemade amplifiers. The Urban Lounge, 241 S. 500 East, 9 p.m., $10 adv/$12 day of

Modern English
Let’s face it: Modern English is still able to make a living because the band crafted a pop-rock classic a quarter-century ago in “I Melt With You.” But the sound of the band’s new album, Soundtrack, indicates the recently reunited original lineup has some life left. The tour is a celebration of the band’s 31 years, and will most certainly mix the old with the new. I suggest all the men the audience shave their chest hair into a “V” ala Nicolas Cage in Valley Girl, as a sign of respect for the band’s longevity. The Urban Lounge, 241 S. 500 East, 9 p.m., $20 adv/$25 day of