Back to School ’07: Students have more options than ever to learn cooking, art and interior design. But will there be jobs when they graduate? 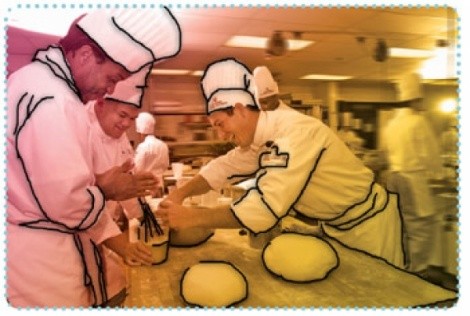 Where do you go to school? To a “good name” type of place, where the prestige may or may not be heavier than the bill, or to a community college? Considering the value society places upon a good-name education, if you’re going to Salt Lake Community College (SLCC), you may answer that question in a muffled whisper. There’s a big difference between how people respond to “community college” or to a name that sounds prestigious, like “art institute.” But is the educational difference worth thousands of dollars in tuition?

The successful megaschool The Art Institutes opens its 35th branch in Draper later this month, not offering fine arts but focusing on two- and four-year degrees in culinary arts, graphic design and interior design—an inadvertent challenge to similar, well-established and accredited programs at SLCC, Weber State University, Utah State University, Brigham Young University and other colleges across the state.

Darren Adamson, president of the Art Institute of Salt Lake City (TAISLC), says his company’s market research reveals “a need, a very intense demand, for culinary arts, interior design and graphic design” in the Salt Lake City area. His research, however, may not take into account how many jobs will be available in a marketplace awash with graduates with similar degrees from other local institutions.

Jan Slabaugh, interior design department chair at Weber State, is concerned. “The Salt Lake area is moving along rapidly in the area of interior design,” she says. “But there are two other universities that offer four-year programs, and LDS Business College offers a two-year one. The market could flood, even without the new institute.”

Slabaugh was surprised when she found out The Art Institutes would open a new location in Draper, especially considering that the TAISLC’s tuition, at $428 per credit hour—or a little more than $20,000 per year for a four-year program—is higher than that at Weber State and other local public institutions. For the past year, she’s worked to bolster her interior-design program to gain accreditation from the revered Council for Interior Design Accreditation (CIDA), which Adamson said the TAISLC will also be seeking. That accreditation will put the two programs on about the same playing field.

While Adamson’s research may not have factored in the graduates-to-available-jobs ratio, that doesn’t mean he hasn’t looked at what the competition is offering. “In Weber State and around Utah, there are several excellent programs,” he says. “Our intent is to establish connections and work with them. We’d be happy to collaborate.”

It would seem a David-and-Goliath pairing. Leslie Seiferle, a culinary arts professor at SLCC, said she is willing to cooperate. She could recommend her students to the institute’s four-year culinary management program, despite the fact she guesses 10 percent of her students will continue their culinary education after SLCC. Beyond that, she isn’t sure. The institute’s facilities will probably be newer and more high-tech, so David may accept an invitation to share Goliath’s kitchen. She isn’t worried that prospective students might migrate to the TAISLC over the years, mostly because of SLCC’s more affordable price tag. SLCC’s culinary arts program is also accredited by the American Culinary Federation, perhaps the gold standard in culinary education and the same accreditation the TAISLC seeks for its culinary programs.

“I went to the Culinary Institute of America,” Seiferle said, “but that was 20 years ago, and the choices we have now didn’t exist. There weren’t Ivy League educations at community-college prices, and we consider our accreditation to be that. We’re very proud of it and we’ve worked hard.”

Justin Nelson, 28, will be among the TAISLC’s first students. Going into graphic design after the program he was enrolled in at ITT Technical Institute was canceled, he’s excited to attend a school with a good name and a nationwide network of resources and campuses. “The facility seems high-tech and the atmosphere seems different from anything else,” he said. “It’s a school that’s focused on art, and it’s more appealing than a general school like ITT Tech, that offers an art program. The focus is on art and sketching and building an art curriculum.”

We’ll have to wait to see what comes out of David and Goliath’s ovens to find out.
{::NOAD::}