Art on You Tattoo's Storm: Halloween All Year 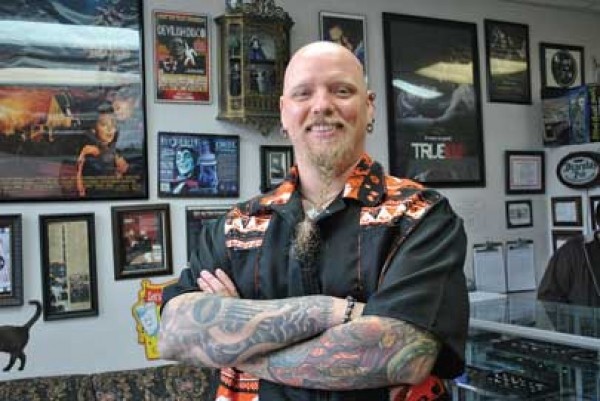 Halloween evolved from being a kid holiday long ago. These days, many adults spend hours and weeks prepping and planning for the day—but none more than Storm and his wife, Renee, who celebrate Halloween all year long. Together, they own Art on You Studios (8971 W. 2700 South, Magna, 801-981-8180, ArtOnYou.com), a tattoo shop that’s packed with horror-movie memorabilia and spooky art. October is their month to shine; the front yard of the family home transforms into a graveyard, and the shop will be hosting its four-year birthday party/Halloween party Oct. 26 at next-door bar The Filling Station—costumes encouraged, of course.

Why Halloween?
It’s always been a major aspect of my life, and I’ve embraced it since I was really young. It was more magical, more wondrous than my birthday, than Christmas, than anything throughout the year. Fireworks on the Fourth of July were all fine and dandy, but they didn’t hold a candle to going trick-or-treating, haunted houses, dressing up. And that magical element that we feel as children was never lost for me. And when I met my wife, it was the same way. We ended up getting married on Halloween, we have Halloween tattooed on ourselves …

How did you get your start tattooing?
I’ve also always been an artist—I consider myself a born artist; it was something I was also doing at a very young age. They sort of coincided. Not only was there a passion for Halloween, but as an artist, it gave me the ability to create that, to reflect that. As I became an adult, it was a matter of finding a way to facilitate my lifestyle. And that ultimately came through tattooing. I was in fine arts in an out-of-state college, and after I finished that I became a tattoo artist. It’s awesome to do art every single day. And if I have to do tribal and flowers, that’s great; then at night, that gives me the opportunity to do my candy corns, black cats and pumpkins.


I will take on anything and everything; I love to create art on people’s flesh galleries. I do specialize in horror and the macabre, and I have people who will come to me for that. I had a girl come in recently and say, “I want you to do an entire sock, whatever you want.” And I said, “Whatever I want? Well, if it’s open-ended, then I’d like to do a haunted house, and some monsters, and maybe some ghosts and some demons and some zombies and some bones and some maggots.” And she said, “I love it all except the maggots. I want you to draw on me and do your horror and your dark art, but I don’t really want any maggots.” I have people that come in and say, “Yes, I just want you to do one of your zombies, one of your demons, this is the space, just do what you do.” I’ll tell you what, that’s flattering. It’s almost difficult to put into words.

Do people react oddly to your passion for Halloween?
Absolutely. The time we most see it is outside of October. So, if I’m wearing a shirt like I’m wearing today in July, certainly some eyebrows are raised. Or with my Facebook, I’m constantly posting Halloween things and countdowns to Halloween. I’ll even get into cosplay with my daughter. We have a Halloween flag that we put outside of our house at any time of the year, people come over to the house and there’s Halloween stuff inside of the door.

During the Halloween season, people like to take it on. They like to peer under the tent flaps and say, “Ooh, that’s what the spooky people do year-round, maybe we can do it now and it’s not so taboo for us to be sexy and look like a whore at a Halloween party, it’s not so taboo for me to put blood all over myself and freak out little kids, it’s not taboo to say that I love horror movies,” because it’s that time of year. But the rest of the year, they seem to be almost disgusted by all of the garb and the accessories and the knick-knacks and everything that would go with it, whereas we say, “No, that’s really us, we genuinely love everything that surrounds Halloween—and even if that means being naughty, we can be naughty year-round and don’t have to hide behind the curtain of Halloween.”

What does October mean for you?
Here at the shop, the artists will run specials. We have our biggest party of the year, Saturday, Oct. 26, next door at The Filling Station—we have the whole thing catered, live music, we do giveaways from official movie posters and T-shirts to tattoos. There’s a lot we do to push the fact that Halloween is the year-round theme of our shop. But then my wife and I, and our children, as well, take advantage of the Halloween atmosphere everywhere—the haunted houses, special Halloween breakfasts, going to pumpkin patches to pick out our pumpkins rather than to Smith’s or whatever. We try and find things as a family that are Halloween-oriented while everyone’s into the atmosphere and into the season.

Do you think other people’s attempts at being Halloween-y are pathetic in comparison?
I think it’s awesome. I certainly will say that for a lot of people, we almost laugh at them and say it’s amateur night. We’re definitely over the top all of the time, but I don’t laugh at them in any mean sense. I think it’s great that they do it—I would rather that people get into the spirit, no matter to what extent, than not at all. It’s a fun time of year, and just like Christmas, people should just do it. Put some pumpkins out, do some trick-or-treating, get into it.

Why is Halloween so appealing?
People are attracted to being scared. That’s why they ride roller coasters. That’s why they want to jump out of airplanes. That’s why they want to climb rocks. They love the rush, they love the thrill. And maybe not as many people are as passionate or as enthusiastic about horror movies or Halloween as my wife and I, but they have that curiosity, and they want to dabble in it—walk through haunted houses with their friends. That’s why movies like John Carpenter’s Halloween have become timeless. People like the stab that comes down that gives them the heebie-jeebies. And I think people have liked it since Alfred Hitchcock put out Psycho. Really, we can go back all the way to early silent films, like Nosferatu in 1922 with Max Schreck; people loved it then, and encouraged their friends to go to the theaters. And that’s magical.

Is it even possible to scare you anymore?
I like the idea of being scared. So when I go through a haunted house, I suspend disbelief and allow myself to be scared.

Is there a cemetery in your front yard all year long?
No, that’s just for the season. But inside, we do have stuff that stays up all year. We have paintings and knick-knacks and lots of accessories and décor throughout the year. Our entire kitchen is “witch’s pumpkin kitchen”—it’s burnt-pumpkin orange, and there are witch hats and all sorts of things throughout the kitchen that reflect the theme, and they never come down.

It’s what we want to surround ourselves with. We follow of philosophy of putting yourself into a total environment. Like Disneyland, which Walt Disney created as a total world. Psychologically, you’re part of it now. It takes you away from the rat race and the deluge of shit that’s out there in the rest of the world, and you can come home to your own world that you’ve created, and it’s your total environment that has everything that makes you happy surrounding you.