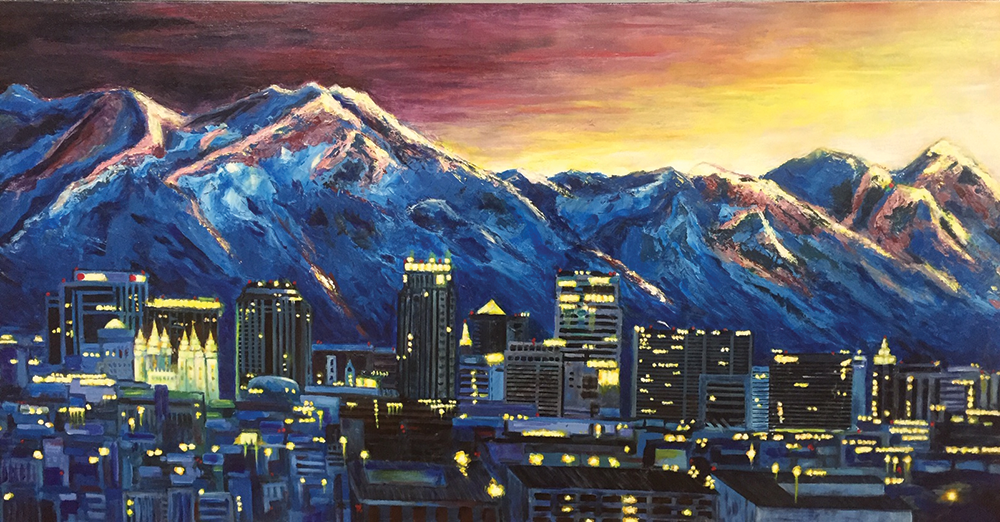 When a gallery builds a group show around a theme, it's usually the theme that comes first: A curator or gallery manager develops a concept, then puts out a call to artists to submit work addressing that theme. Urban Arts Gallery, however, looks at things from a slightly different perspective. They want artists' creative impulses to dictate themes, rather than vice-versa.

The new exhibition Art Elevated is just one manifestation of that unique approach, according to Urban Arts Gallery curator and gallery manager Scott Tuckfield. This show—representing between 80 and 100 pieces by 19 participating artists—finds the creators exploring ideas surrounding living in Utah, from its unique geography to its social and political climate. But Urban Arts Gallery never specifically asked those artists to create works about Utah; they simply saw that's what artists were doing.

That recognition came as part of the gallery's annual open call at the end of the calendar year for submissions of any kind, about any subject. While some shows at the gallery—like the May Star Wars–themed show or the September skate deck show—have become annual fixtures, other monthly exhibitions emerge from the work Tuckfield receives. "We see what they're doing, and there are always common themes that emerge," Tuckfield says. "Maybe, for example, female artists are exploring feminist themes. So we'll take all of those artists ... and put together things that fit. And we noticed a lot of things that were commenting on the sense of being in or from Utah."

Because Urban Arts Gallery has established relationships with artists over the years, many participants recur from one year to the next. "Some [artists] have a very particular style, so we know he or she might be just right for the Star Wars show, or the fantasy show," Tuckfield says. "Or someone might do portraiture, or more traditional oil paintings. We kind of allow ourselves some flexibility. If it's a nice landscape of a mountain, it could be a good fit for a Utah-themed show, even if that's not what the artist had in mind when they were making it."

Tuckfield acknowledges that such an approach presents challenges for a curator. "Sometimes I'd definitely prefer to know ahead of time [what the theme will be]," he says. "But if it turns out for some reason, 10 or 20 artists are doing work on a certain theme, that's a creative thing that's percolating. ... We get to see what artists are doing out of their own inspiration, instead of them giving us what they think we want to see. We see a lot of interesting, really fringe-y art that way, that might be part of a more curated process."

Included among the pieces in Art Elevated are representations of the trademark arches of Southern Utah, but in styles varying between surrealism and abstraction. Other artists look critically at current politics, while there are also earnest depictions of iconography from Mormon scripture. For Tuckfield, it was important to present an exhibition that did not slant toward only one perspective on the state. "I really want to be careful, because I don't want my own opinions necessarily to dominate what the artists get to say," Tuckfield says. "I'd rather have a space, and let the natural diversity of voices take center stage."

Fortunately for Tuckfield, that diversity comes as part of the territory in a show where the artists can create without rigid guidelines. It might be a bit more work for a curator, but the results can be liberating for those who create the work, as well as those who get a chance to experience them. "I have art delivered, and sometimes that's what I have to work with," Tuckfield says. "Because of our mission of trying to be very inclusive, we get those more radical pieces and artists—weird and interesting new things—in addition to some established pros. Most of the time, that sort of diversity—when I'm really fortunate—just kind of unfolds naturally."