BEST TOURING PRODUCTION/ PERFORMANCE
Wicked (Broadway Across America)
It was the kind of theater experience that brought out people who never go to the theater—and they definitely got their money’s worth. The Broadway smash— adapting Gregory Maguire’s novel about the relationship between two young witches in the Land of Oz—finally made it to Salt Lake City for a sold-out run, but it wasn’t simply a case of folks longing for Phantom of the Opera-esque spectacle. While the production looked terrific, the cast members were what really made the songs—and the entire experience—defy gravity. BroadwayAcrossAmerica.com

BEST OPERA/CLASSICAL PERFORMANCE OR PRODUCTION
(tie) Don Pasquale and Madame Butterfly, Utah Opera
The Utah Opera opened and closed its 2008- 09 season with a bang. Madame Butterfly was a deft choice for season opener. Not only is Puccini an audience favorite (this show is surpassed in popularity perhaps only by his La Boheme or Rossini’s The Barber of Seville), but Barbara Shirvis in the eponymous role was sufficiently breathtaking to make audiences and critics sit up and take notice. In its spring production of Don Pasquale, the opera company took the liberty of changing its setting from Rome to the Wild West—a risk which may have resulted in abject failure or allowed for a completely fresh look at Donizetti’s source material. Fortunately, the latter case turned out to be true, making for a truly memorable season. UtahOpera.org

BEST DANCE PRODUCTION/ PERFORMANCE
Surfaces (Ririe-Woodbury)
Surfaces wrapped up Ririe-Woodbury Dance Company’s (RWDC) 45th season this past April with an amazingly fresh look at modern dance. Repertory companies often get stuck in a rut, re-running the past—but this performance, consisting of works by three very contemporary choreographers, was amazingly forward-looking. Combining Doug Varone’s witty Strict Love with Wayne McGregor’s very physical Series I set the tone for an evening that was topped off with a new commission by the innovative, New York-based choreographer Susan Marshall. Ririe-Woodbury.com

BEST ORIGINAL PLAY
Troy Williams & Charles M. Frost, The Passion of Sister Dottie S. Dixon
It’s like Titanic: You get the feeling if there had been a Best Original Song category, Sister Dottie might have won that one, too. And it’s easy to understand why Pygmalion Theatre Company’s production—which followed the tragic-comic personal journey of “Spanish Fark’s” favorite devout Mormon housewife and proud mother of a gay son—became such a sensation this spring. Troy Williams & Charles Frost created a narrative that took Sister Dottie’s satirical Utah malapropisms and fiery conviction and added a potent emotional element. Frost’s dynamic performance found the genuine, conflicted human soul in a woman trying to reconcile her faith with her love for her child. And co-directors Fran Pruyn and Laurie Mecham crafted a staging that gave the Rose Wagner Center’s sometimes-cavernous Studio Theatre space a surprising intimacy. We laughed, we cried … and with a revival/sequel planned for October, we’ll get the chance to do it all again. 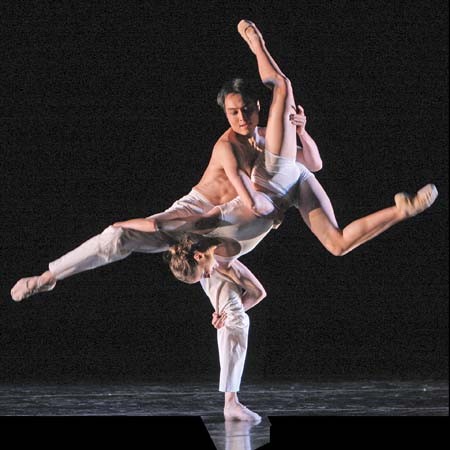 BEST CHOREOGRAPHY
Peggy Dolkas, Yes, But How Did You Get There? (Ballet West)
According to Ballet West soloist Dolkas, the transition from student of dance to seasoned artist is a journey. Dolkas´ stunning “Yes, But How Did you Get There?”—which was part of Ballet West’s 2009 Innovations program—is an elegant, fresh-movement mixtape that chronicles Dolkas’ artistic evolution from student of pre-ballet to accomplished soloist and choreographer. Dolkas’ chosen soundtrack—which includes the music of Cut Chemist and DJ Shadow— makes her rich, lively journey a captivating ride worth taking. balletwest.org

BEST LOCAL COMEDIAN
Marcus
Of all the winners this year, comedian Marcus is probably the most recognizable. After taking second place on NBC’s Last Comic Standing in 2008, his popularity has spread to every corner of the nation. Marcus’ career is on fire: He has been getting gigs at college campuses, conventions, and bigger and bigger comedy clubs all over the country. Though he’s been known as “The Man of 1,000 Voices,” his decision to cut impressions from his act doesn’t seem to be hurting his reputation at all—and his recent DVD will only add to his sure and steady climb to the top. myspace.com/comedianmarcus

BEST IMPROV TROUPE
QuickWits
Fifteen years—yes, 15—and countless venues later, Bob Bedore’s original prankstas of Utah improv comedy still put on the best show in town. QuickWits is one of the rare local exceptions to the rule that “family-friendly” equals “snooze-fest,” with weekly Friday-night Studio 600 shows that crackle with energy and invention for crowds that span age and social demographics. QuickWitsComedy.com

BEST FICTION BOOK
The Actor and the Housewife, by Shannon Hale
The stereotype of readers of City Weekly is that they are a group of city-dwelling, childless, non-Mormons who eschew traditional values. Either the stereotype is inaccurate, or those stereotypical readers enjoy a book about something completely foreign to their own lives. The top vote-getter in the fiction category was Shannon Hale’s novel, in which the main character is a Mormon housewife from Layton with her four kids. Of course, if there’s anybody who can make such a character interesting for over 300 pages, it’s local author Hale, already an award-winning, best-selling author in the young adult realm. ShannonHale.comBEST POETRY COLLECTION
Eleanor, Eleanor, not your real name, by Kathryn Cowles
A Utah native and University of Utah doctoral candidate, Cowles burst on to the poetry scene with the publication of her first collection in 2008. Winner of last year’s Dorothy Brunsman Poetry Prize, Eleanor finds the author exploring the world of a character who may not exist—or may be the author herself. The evocative verse alternates between the playful and the painful, words of struggle to find an identity: “my mother’s marriage changes her last name/I keep mine split family tree chop chop.”

BEST SHORT FILM
Sister Wife by Jill Orschel
Orschel’s short documentary is disarmingly simple in its presentation: A woman named DoriAnn describes her experience as a plural wife in the Fundamentalist Church of Jesus Christ of Latter Day Saints. Intercut with the talking-head interview are serene images of DoriAnn in a candlelit bath, but the words are anything but serene as she describes the pain of knowing her husband is with another woman—and that the woman, her sister-wife, is her own biological sister. As DoriAnn’s voice repeatedly breaks with emotion, we get a powerfully raw portrait of a woman trying to cleanse herself of anger and guilt, while perceiving the transcending of her jealousy as divine. SisterWifeFilm.org

BEST SCULPTURE/MIXED MEDIA EXHIBITION
337 Project: Neighborhood House
Nonprofit daycare center Neighborhood House has added to its already vital role in the Rose Park area,with the 337 Project’s call for artists to decorate the site’s eight garage doors with art by local painters in two separate exhibits this year. The second one, as voted upon by spectators, awarded the winning “Face Off” team of artists Chuck Landvatter and Dave Doman $1,000 in June. The artwork, visible from the street 24/7, is the best reason to drive around late at night since 24-hour fast-food drive-up windows.
337Project.org