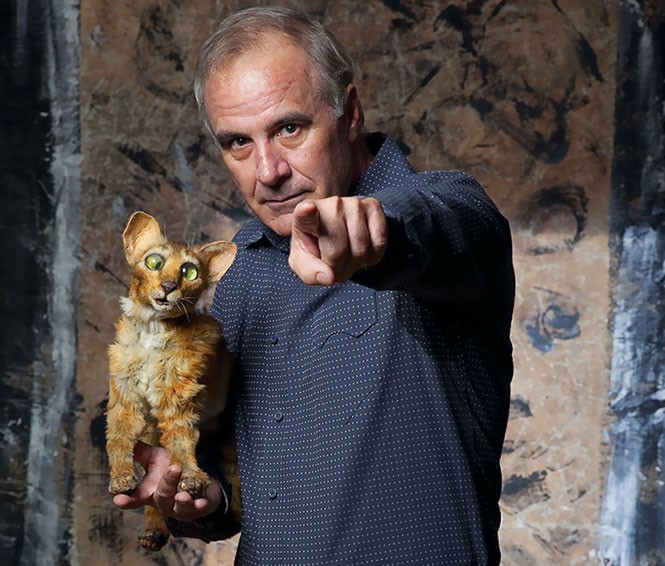 BEST RETROSPECTIVE FOR AN ODDBALL ARTISTIC HERO
Trent Harris, Echo Cave
The past year was a big one for local indie filmmaker Trent Harris. His 1996 book, Mondo Utah, inspired the Utah Museum of Contemporary Art's first Utah Biennial exhibition of Utah artists and those who've had an impact on the state (including a visit from Andy Warhol imitator Allen Midgette, who fooled a University of Utah audience in 1967). In January, UMOCA unveiled Echo Cave, a retrospective of Harris' work, including paintings, drawings, film stills and artifacts never seen before, including correspondence between him and avant-garde filmmaker Bruce Conner. The high point was a premier of his latest film, Luna Mesa, one of his most imaginative and poetic yet.UtahMOCA.org

BEST TIMELESS DESIGN
Katie Waltman Jewelry
Waltman has been hand-making jewelry in Salt Lake City for more than a decade, with her products featured in national magazines, but it wasn't until she opened her 9th & 9th boutique just a year ago that locals got a chance to ooh and ahh in person over her gorgeous framed-quartz pendants, glistening gold bracelets and delicate earrings. Affordable but high-quality, her pieces possess a timeless, eye-catching beauty. Long after trendy baubles—remember chokers, bubble necklaces and feather earrings?—make their way to kids' dress-up boxes, Katie Waltman creations will have permanent homes on wrists and in jewelry boxes.
962 E. 900 South, Salt Lake City, 385-227-8977, KatieWaltman.com

BEST DOOMED ROMANCE
Emilie Eileen Starr & JayC Stoddard, Grace (Utah Repertory Theatre)
Real love isn't an easy sell for actors; it's even harder when you're trying to convey that love as something akin to a religious experience. In Utah Repertory Theatre's production of Craig Wright's Grace, Emilie Eileen Starr plays a married Christian woman who drifts away from her unstable husband and falls for her physically and emotionally wounded neighbor (JayC Stoddard). The scene in which their connection becomes evident was an electrifying theatrical moment, the emotions so raw it was almost uncomfortable peering in on something that's so pure—yet, as we know from the play's outset, can never have a happy ending.
UtahRep.org 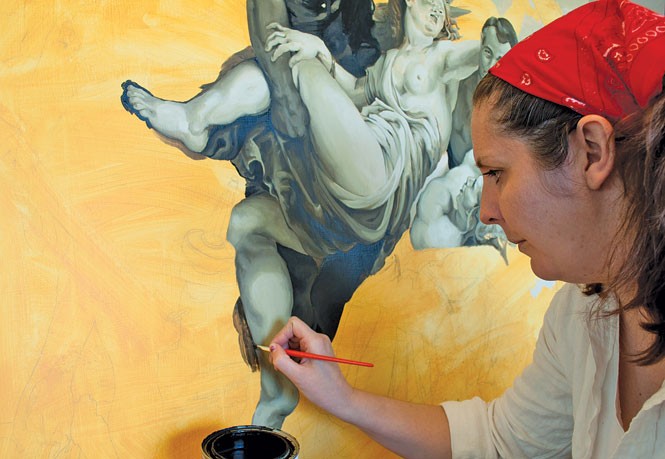 BEST PROVOCATIVE THEME
Heroes, Gods & Monsters (Studio Elevn)
Anne Cummings, former co-owner of Aperture Gallery, was thinking outside the box when she organized one of the largest group exhibits of the year at alternative art space Studio Elevn. Rather than overtly deal with themes of "social justice, critical thinking, activism and advocacy," she says, she sought works that use characters and subjects that've made epic impacts. In the end, the exhibition contained overwhelmingly powerful works, like Phillip Lambert's depiction of A-bomb creator J. Robert Oppenheimer, the frame tinged with blood-like tints, and Zeke Higham's oil painting "Saint Michael Slaying a Riot Cop." Benefiting Equality Utah, the show reminded us that some of the real local heroes are artists themselves.
StudioElevn.com

BEST TOUR OF SPACE & TIME
The Pavilion (Silver Summit Theatre Company)
Craig Wright's script starts in the moments just preceding the Big Bang. The stage is dark as narrators Brian Pilling and Julie Mylan Simonich guide the audience from the beginning of time through the formation of stars, galaxies and planets, past primordial sludge and the dawn of civilization, before coming to a screeching halt at a 20-year high school reunion. As trite as midlife crises at a high school reunion might sound, Silver Summit Theatre Company's production pulled the mundane into the grandeur of the universe, showing how one evening may be more monumental to a man's life than all the combined time and space beyond his reach.
SilverSummitTheatre.org

BEST "INSPIRED" PERFORMANCE
Ashley Horrocks, Agnes of God
Based on a true story, John Pielmeier's Agnes of God deals with the weighty subject matter of a novice nun who—having hidden her pregnancy—faces trial for asphyxiating her newborn child. In scenes depicting the character undergoing pre-trial psychological evaluation, Ashley Horrocks played Sister Agnes with an air of vulnerable naïveté that contrasted starkly with the allegations she faced. That, paired with the sweet cadence of her singing voice, meant that audiences didn't have to work to understand how Mother Superior might believe the girl to have been touched by God—and somehow, miraculously, innocent.
WestminsterCollege.edu/Theatre 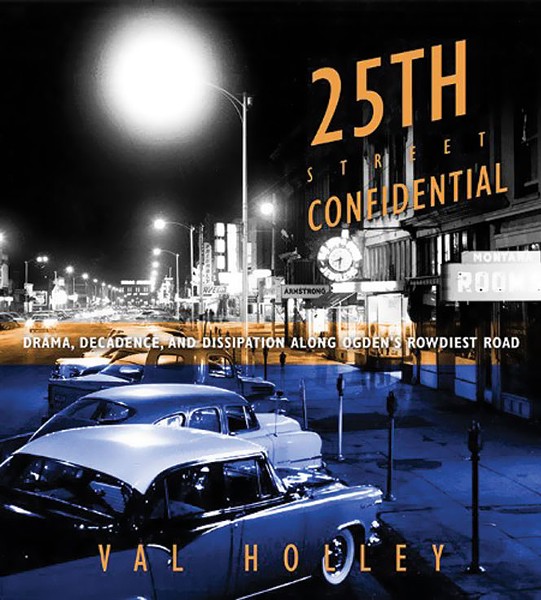 BEST WILD WEST HISTORY
Val Holley, 25th Street Confidential
The mythology of the Wild West may look like Utah's Monument Valley in classic Hollywood movies, but it may have been even wilder in one of Utah's cities. Weber County native Val Holley traced the fascinating history of Ogden from its days as a stopover on the transcontinental railroad through a boom period that gave the city a distinctive touch of decadence in 19th-century Mormon-settled Utah. It's a fascinating collection of anecdotes about clashes over permitting vice-based businesses, and one town's evolution into a microcosm of battles between religious and secular sensibilities.

Even if you haven't read Pride & Prejudice, you've probably been exposed to one of the BBC/YouTube/Mormon/Bollywood adaptations. But what's innovative about Melissa Leilani Larson's script is that she uses the stage to make Jane Austen's masterpiece feel fresh without resorting to gimmickry. BYU's spring production opened on the Bennets posing as if for a family portrait and closed with Elizabeth and Darcy posing for a similar one. In between, Larson's script employed several theatrical devices to develop relationships, pulled the cleverest bits out of the text, and followed each of the Bennet sisters' journeys without stretching the play tothe length of a miniseries.
MelissaLeilaniLarson.com

BEST COMEDIC ENSEMBLE
SLC Comedy Carnivale
Several attempts have been made to launch a proper comedy festival in Salt Lake City, with mixed themes and mixed results. The Comedy Carnivale became a success by focusing on a single area: stand-up comedy. Christopher Stephenson curated a blend of local favorites and national acts—a combined 40 stand-up performances across three days. With a second festival on the way this September, it looks like a solid Salt Lake comedy fest is finally here to stay.
SLCComedyCarnivale.Wordpress.com

BEST ONSTAGE HEARTBREAK
The Last Five Years (Salt Lake Shakespeare)
The plot sounds simple: Aspiring actress Cathy and wunderkind writer Jamie alternate songs, giving their separate perspectives of their tumultuous five-year relationship. But the musical's unusual structure—Cathy starts at the end of the relationship and Jamie begins at the end of their first date—gives it complexity and pathos. With only two roles in the production, the success rests on the leads, and Salt Lake Shakespeare's pair nail it. Alternating nights, twins Austin John Smith and Taylor Smith gave Jamie the necessary humor and cockiness, while Sara Kae Childs and Tia Galanis shone as the wry, wounded Cathy. In just 80 minutes and 14 songs—some humorous, some heartbreaking—the intimate performance in the Babcock Theatre let audience members feel as though they'd been there for every minute of a very real couple's beautiful, painful relationship.
Theatre.utah.edu/productions/salt-lake-shakespeare/ 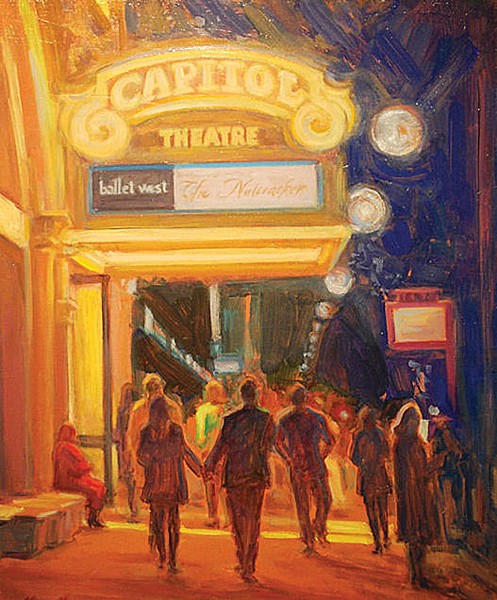 BEST IMPRESSIONIST PAINTINGS OF SALT LAKE CITY
Karen Horne, Night & Day
Artistic heritage runs in her family, but Karen Horne (great-granddaughter of Alice Merrill Horne) is a seasoned artist in her own right. Her art gallery, Horne Fine Art, features not only her own work, but also showcases innumerable community artists. With Night & Day, a blockbuster art event of the summer, Horne occupied the entire Gallery at Library Square with impressionist images of Salt Lake City events and landmarks. Horne's signature style of color and movement translated familiar city settings into uncanny scenes, frozen in atmospheric and spirited depictions of the present.
HorneFineArt.com

BEST GAME DESIGN
Tripleslash, Magnetic by Nature
Formed in 2012 by a collective of University of Utah students—artists, animators, musicians, writers and programmers—looking to turn their passions into their careers, SLC gaming company Tripleslash received national exposure when its first game, Magnetic by Nature, caught the eye of fellow independent companies at E3 and became one of the first games funded completely by crowdsourcing to hit the convention floor. Now, with the game set for release this fall and the company already working on its next title, Tripleslash is helping prove that Utah is a vibrant place for independent game companies.
TeamTripleslash.com

BEST VARIETY SHOWCASE
12 Minutes Max
Once a month, the Salt Lake City Library opens up its auditorium to an array of musicians, dancers, actors, poets, filmmakers and others for a free public performance. Borrowing from a successful series in Portland, Ore., 12 Minutes Max gives performers an opportunity to reach an audience with their best new work, crunched down into 720 seconds. Think of it as performance art for people with short attention spans.
SLCPL.org