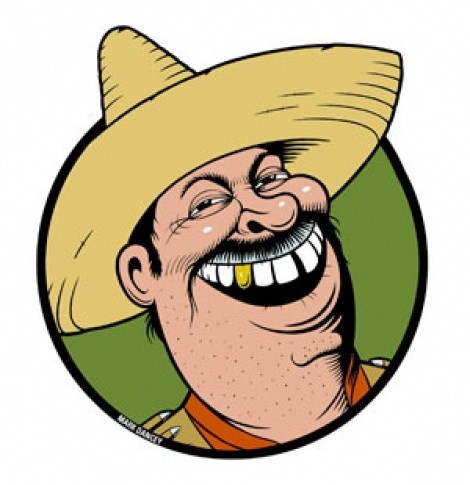 Dear Readers: The Mexican has previously published only one Best of column in his nearly four years living under his cousin’s identity in this country with, but I must pull this week’s first pregunta out of the archives because ustedes keep asking it—obviously, not enough of you bought my paperback since it’s on Page 192! The second question, on the other hand, is brand-new. Now, back to smuggling more illegals across the Arizona desert …

Dear Mexican: Why do Mexicans swim in the ocean with their clothes on? I mean, denim?! —Vicente Fox’s Mustache

I know this might be a seasonal question, but why do Mexicans like swimming in their clothes? Is it a Catholic thing? I remember as a child growing up in the San Fernando Valley in California that my pocho Catholic cousin even bathed at home in his T-shirt and underwear through his adolescence. He claims the nuns told him it was a sin to be naked. —Huntington Beach Baboso

I am half-Mexican myself but just don’t understand—why do Mexicans wear their clothes when swimming? They are the only people at a beach or public swimming spot who do it. Very bizarre—please explain! —Half-Mexican

Dear Pochos: This is by far the most-asked question in ¡Ask a Mexican! history. So, to todos ustedes, I have my own question: Are you all brown chubby chasers? Like gabachos, an alarming number of Mexicans are out of shape. According to a 2003 study by the Organization for Economic Co-operation and Development, 24 percent of Mexico’s population is overweight. That’s the second-highest obesity rate in the world following—wait for it—¡los Estados Unidos! ((The Mexican’s present-day note: A 2008 study found the same results. I’d cite the exact survey, but here comes la migra—gotta run!) Unlike gabachos, Mexicans respect the public when it comes to flashing our flabby chichis, pompis and cerveza guts—so when we’re out near the pool or by the beach, we cover up. It ain’t Catholicism, machismo or an homage to our swim across the Rio Grande. It’s good manners.

Dear Gabachos: The easy answer is that ice cream is muy bueno; the easier respuesta is that Mexican ice cream is better than the stuff sold by gabachos. In addition to the tried-and-verdadero flavors stocked at Baskin-Robbins, Mexicans concoct wonders drawn from our many indigenous fruits—mango, papaya, tamarind, the football-shaped mamey, prickly-pear fruit, and the crazily named soursop (guanábana in Spanish) are just the tastiest. Then there are the choices that reflect unique Mexican sensibilities—rompope (eggnog, which is much better frozen than sipped), chongos zamoranos (curled milk and cinnamon) is our Rocky Road, spicy chocolate. But we don’t content ourselves with just soft serve; even better are our paletas, rectangular ice pops made from either aguas frescas like watermelon and lemonade or de leche: creamy, luscious, milk-based joys. And the best Mexican frozen delight is actually the raspado, our version of shaved ice, except our syrup is natural and won’t kill you with preservatives. Gabachos: Instead of spending this coming long, hot summer stewing over the Mexicans among you, join them in waving down the local paletero—and make sure to feed them one iced treat a day lest their natural caliente-ness cause further global warming.