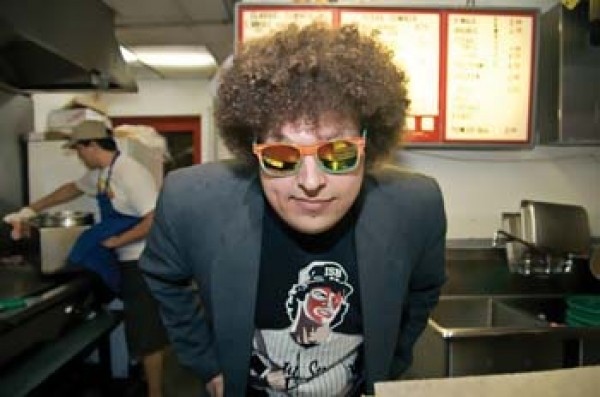 A chubby white kid with an Afro walks into a bar and kicks off a rap battle by pointing out that he looks like Cory Matthews from Boy Meets World. That’s not the beginning of a joke; it’s actually what Sugar House emcee Scott Knopf, aka Atheist, does on the regular.

Over the past few years, Atheist has made a name for himself in the freestyle battle circuit by having the gumption to explore simple, yet typically ignored rap subjects, i.e., self-deprecation and self-awareness. This isn’t anything new—rap fans have witnessed this lack of braggadocio before in the likes of J-Zone and Cool Calm Pete. But Atheist has a knack for coming across as the most talented rapper in the room without having to actually say it.

This is most evident on his third and latest album, Topanga, which was released Aug. 8. Recorded and engineered by Provo rapper Chance Lewis and featuring prominent guest spots from names like DJ SkratchMo and Crown City Rockers frontman Raashan Ahmad, Topanga is a full-court press of golden-age, five element hip-hop, minus the Joey Bada$$ snobbery.

In the past, Atheist’s music has been tagged as nerd-core hip-hop, but even that seems lazy and incorrect. If anything, it’s comedy. On the track “You Love Me,” he explains how successful he became when he received 20 downloads on the indie-music blog DatPiff.com. “Twenty downloads on DatPiff because that’s that shit, and now I’m feelin’ like I finally fuckin’ made it.” Later on in the track, he calls out his critics by stating, “Haters gonna hate cuz they got those baby dicks, you know what I’m saying?”

It’s a rare occurrence when a skilled freestyle rapper can produce a quality studio album—dusty stacks of Canibus, J.U.I.C.E and Supernatural LPs don’t lie. There’s a handful of variables that play into this, but it mostly comes down to the fact that battle rappers take themselves too damned seriously.

Not caring what anyone thinks is probably what Atheist does best, and this patented forthright and humoristic approach to hip-hop oozes from Topanga. The album is an obvious nod to Cory Matthew’s sitcom crush of the same name. But stripped down, Topanga hints at Atheist’s appreciation for the underground Utah scene and an almost over-the-top love of nostalgia. “That’s the No. 1 driving force in my life,” Atheist says. “I only do things so I can be nostalgic about it later. With Topanga, I was questioning at one point whether or not I wanted to do it, and then I was like, ‘Well, yeah, when you’re 80, you’ll have this rap album and you’ll love it.’ ”