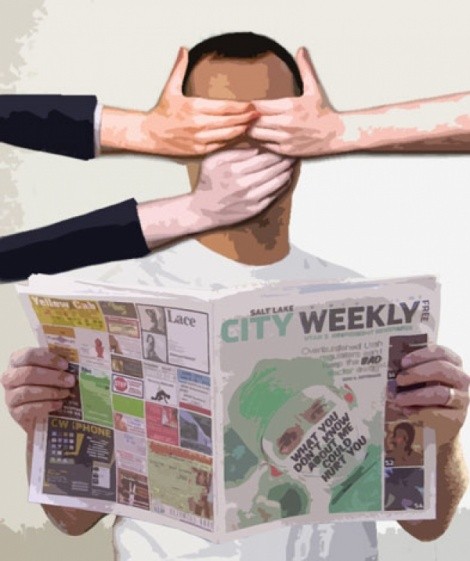 It was a document the public’s tax dollars pay for but they (almost) never see: an expert’s opinion on whether a Utah doctor made an honest mistake or a negligent, incompetent screw up. The Utah Attorney General’s office provided that document to City Weekly reporter Eric S. Peterson in June, then demanded it back, telling City Weekly that the document was private and the paper was unlawfully in possession of it. They threatened the paper and Peterson with criminal charges and prior restraint in an attempt to keep the information—and their error in releasing it—from being published.

Though legal saber-rattling persisted throughout late August from both the Attorney General’s Office and attorneys representing the doctor whose performance was critiqued, the threats didn’t work. Peterson kept the expert report and portions of it were featured in Sept. 23’s City Weekly cover story, “What You Don’t Know About Your Doctor Could Hurt You.”

Read legal letters from attorneys for the Utah Attorney General's Office, the attorney for Dr. Joe Eyring and City Weekly

The document, Peterson says, demonstrates the difficulty the state’s Division of Occupational and Professional Licensing [DOPL] has investigating standard-of-care cases against doctors.

The issue began in May, when Peterson received a complaint from a patient regarding a doctor’s poor treatment. Simultaneously, Peterson says, he was following up on his past investigations into Utah Attorney General Mark Shurtleff’s relationships with two individuals: iWorks president Jeremy Johnson—who faced charges filed by the Attorney General's office and months after they were dismissed gave Shurtleff $50,000 in campaign contributions [“The $50,000 Question,” CityWeekly.net, June 18, 2008]— and Tim Lawson, a friend of Shurtleff’s and a lobbyist for embattled call center Mentoring of America [“Mark Shurtleff: Ethical Questions,” CityWeekly.net, March 10, 2010]. (ed. note: this sentence has been corrected to indicate the role the Attorney General's office played in the enforcement action against Johnson).

Peterson made a records request through the Government Records Access and Management Act [GRAMA] to the AG’s Office to review all e-mails and communications between the office and Lawson and Johnson. The AG's Office asked for $800 for the records, so Peterson found a cheaper avenue: In a much-reported fracas between the two former candidates, Sen. Bob Bennett, R-Utah, made a giant records request on Shurtleff’s office before Shurtleff pulled out of that race in Novemer 2009. Peterson asked to review the materials that had been compiled and provided to Bennett's campaign, and the AG’s Office allowed Peterson to inspect those records, at no cost.

Peterson went to the Heber Wells building on 300 South—which houses some of the AG Office's staff—for three consecutive days in June to inspect “six to eight boxes” of documents on a wide variety of subjects. “Everything there they expressly told me was free for me to inspect and make copies,” Peterson says. He had a staff “handler” observing and video-recording his every move.

Among the records, Peterson says he found documents regarding Lawson, Johnson and one thing he never anticipated: a December 2008 review of a contract between DOPL and an out-of-state colorectal-surgery expert tasked with reviewing the performance of Utah surgeon Edward Joseph “Joe” Eyring II. The memo contained names of several patients who had complained about Eyring, something that seemed unusual.

“Obviously, it was sensitive; I understood that,” Peterson says. “It was clear we’d have to use it carefully.” Peterson decided to keep patients’ names private except for those who wished to go public if he used the document in the story. “The document showed exactly how hard it is for the state to do things on standard-of-care [complaints against doctors] … which is valuable to the public,” he says.

He contacted the former patients—or their attorneys, in cases in which they are suing Eyring or were embroiled in mediation—to verify the accuracy and timeliness of the documents’ contents. Meanwhile, Peterson was also investigating other doctors in similar disputes with disgruntled patients.

On Aug. 24, assistant attorneys general Tony Patterson and Ron Oakey contacted City Weekly Editor Jerre Wroble to request that City Weekly not publish any information in the document “because it may be a violation of HIPPA [Health Insurance Portability and Accountability Act] and GRAMA, which,” Patterson said, “does carry both criminal and civil sanctions.”

The same day, Eyring’s attorney, Michael Miller, called Wroble to say they would pursue “all remedies of law, including a libel action if necessary, if any improper information is published.”

Peterson’s story was scheduled to be printed within days, but was delayed for legal review after those calls. “Our approach was not full-speed ahead … but to go the extra mile,” Peterson says.

Letters from the AG’s Office and Eyring’s attorney followed, as well as conversations with City Weekly’s retained attorney, Randy Dryer. A letter sent to Dryer from assistant AG Morris Haggerty, dated Aug. 26, claims that Peterson “made said copies without authorization of the Utah Attorney General’s Office” and that the record was not “lawfully in the possession of the Salt Lake City Weekly, Eric Peterson or any other person and must be immediately returned.” They said they would pursue all legal options “including but not limited to seeking a temporary restraining order.”

Department of Commerce executive director Francine Giani says she, too, was concerned about private information being published, but after her staff spoke with Peterson and learned he would not be publishing the names of patients who wished to remain private, her fears were allayed. “We felt comfortable with his representation that names would not be used,” she says. “None of [the legal threats] were generated by our office, nor requested.”

Wroble calls the release of the document “a lucky break,” a peek into government corners the public rarely sees. She says expert reports like the one released to Peterson—without patient names—ought to be available to the public if, as in Erying’s case, DOPL substantiates the complaints. “In the investigation stage, these should remain private. However, once the determination has been made [that a doctor failed in his/her professional duties], that’s when we need crystal-clear transparency.”

AG’s Office spokesman Paul Murphy issued only one comment for this story. “Our legal concerns about the documents can be found in the letters to your newspaper and your attorney.”

During the legal discussions, Haggerty cited a portion of GRAMA that states, “A public employee or other person [emphasis added] who has lawful access to any private … record … and who intentionally discloses [that record] knowing that the disclosure or use is prohibited … is guilty of a class B misdemeanor.”

Dryer says GRAMA only “imposes restrictions on government or those who are working with government, such as private subcontractors or outside consultants.” News media, he says, are not liable for criminal acts of obtaining or releasing information, “as long as [the news person] did not participate in the criminal act.” So, could the Attorney General’s Office be guilty of the very provision they said Peterson was violating? Dryer says probably not.

“I have no way of knowing whether this was intentional or not,” Dryer says. “I suspect it wasn’t. I suspect someone just screwed up.”