Ring in the new year with a live-music party

Whether your New Year’s Eve focus is on DJs, bar-hopping, raucous parties (more on those events p. 46) or live music, we’ve got you covered. Below, we’ve assembled a list of where you can see live music on Dec. 31 itself; for info on live-music events throughout the weekend, visit CityWeekly.net/Events.

FemaleWolfPack.com Launch Party
This red-carpet event is for everyone, but it’s all about the ladies. DJs Funkee Boss and NobTerner will provide tunes for elegantly draped hips to swing on the dance floor to. It’s in celebration of FemaleWolfPack.com, a website for women to upload their “jaw-dropping, funny, creative and/or interesting footage to the masses through a consolidated social network.” It’s designed to increase female visibility in action sports and to “give women an environment to show the world what they are capable of without financial, industrial or social restrictions.” This midnight toast will be to a new year, but also to the badasses in all of femaledom. Bar Deluxe, 666 S. State, Dec. 31, 9 p.m., $10 in advance, $15 day of show

Maimed for Life
Screw 2013: Party like it’s going to be 1983 with this old-school local ’80s punk/hardcore band. SLC Punk may have been loosely based on one of its members, but what is known is this: Maimed for Life offers up pit-worthy power chords in rapid little doses of songs. This will be one of the few New Year’s Eve gigs featuring local bands, and it will be one of the best throwback shows of the year. More local support will be provided by The Wild Ones, Gnawing Suspicion and Salt Lake Spitfires. Burt’s Tiki Lounge, 726 S. State, Dec. 31, 9 p.m., $5

Nathan Scott
With the abundance of DJs on this fine holiday, how can one tell this V-neck-shirt-and-aviator-sunglasses-wearing music-mixer apart from the rest? Although he’s held down premier residencies in Chicago, Nathan Scott is familiar with getting party people pumped outside of his hometown; he’s honed his skills over the past half-decade on decks worldwide. While he was abroad, his sound was influenced by prominent international spinners like Judge Jules, Mark Knight and Victor Calderone. Tonight, Scott will also drop his hallmark sounds on one of Salt Lake City’s finest sound systems, at The Depot. Look forward to deep-house mixes that hark back to his inspirations, like Frankie Knuckles, Julian Perez and Bad Boy Bill. The Depot, 400 W. South Temple, Dec. 31, 9 p.m., $30 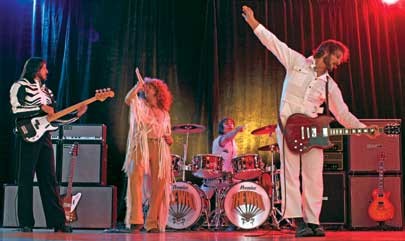 The Who Show
Upon browsing TributeCity.com, you’ll find tribute bands paying homage to bands that you wouldn’t even want to see as the real thing (Alanis Morissette, 3 Doors Down, Colt Ford). And then there are tributes to those bucket-list bands that you never saw in your youth, nor will ever be able to, like The Who. But how can one discern between the 20-plus The Who wannabes? Let VH1 be your guide; the cable channel voted The Who Show as the most believable tribute to the classic-rock four-piece. The band nails everything in great detail from Entwistle, Townshend, Daltrey and Moon. You won’t get fooled again (I had to—sorry) when The Who Show rolls out classic hits like “My Generation,” “Behind Blue Eyes” and “You Better You Bet.” Egyptian Theatre, 328 Main, Park City, Dec. 31, 8 p.m., $30-$50, also on Dec. 30

Legends: Regenerated
V2 Events—promoter/party planners for all things EDM in SLC—encouraged their fans on Facebook to “get your bass face ready” for Legends: Regenerated. Their directive was accompanied by a photo of a guy wearing a wig and doing the Unimpressed McKayla face. And I thought a “bass face” was more like the old-school Maxell Tape commercial of the guy getting blown away by sound. Well, the thousands in attendance when Legends: Regenerated returns to its old home, Great Saltair, can decide. Now in its sixth year, the event welcomes the Salt Lake City debut of Flux Pavilion, along with a bevy of other bass-heavy knob-turners, like Cookie Monsta, Lucky Date, Brown & Gammon, Torro Torro and more. Great Saltair, 12408 W. Saltair Drive, Magna, Dec. 31, 6 p.m., $30-$75

Codi Jordan Band
Codi Jordan grew up in the farm-friendly mountainside town of Eden, but after visits to Southern California to see family, he fell in love with the beach scene. His musical style has roots in SoCal via the late ’90s—Sublime, The Dirty Heads and Slightly Stoopid—yet with a rockin’ high-desert tinge. Codi Jordan Band will play a sunny set to include songs from the forthcoming A Little More Less. Concert tickets also include a DJ set, an appetizer buffet and a glass of Champagne at midnight. Harley & Buck’s will also host a separate five-course dinner of American cuisine. Harley & Bucks, 3900 N. Wolf Creek Drive, Eden, Dec. 31, 9 p.m., $35

Black & White Masquerade Ball
DJ Ravi Drums is quickly becoming a holiday staple at Park City Live (OK, not Thanksgiving or Christmas, but ...). The DJ/drummer hosted a sold-out shindig on Halloween. He must dig costumes, because this Black & White Ball is all about the masquerade masks—something he probably saw much of during his stint as the personal DJ to Hugh Hefner. Drums brings the fervency of heavy-metal drumming—where he got his musical start—and throws down warbling bass and splices in samples while he plays analog and digital music simultaneously. Playing in front of his Dream Screen—a feast for the eyes—Drums runs the gamut of genres, including hip-hop, rock, funk, house, Latin, Brazilian and reggaeton. Park City Live, 427 Main, Park City, Dec. 31, 9 p.m., $50 in advance, $75 day of show

Coco Montoya
Keb’ Mo told Coco Montoya that the bluesman had six albums of everybody-knows-you-play-guitar; as co-producer of Montoya’s 2011 release, I Want It All Back, Mo pushed for Montoya to find not only his voice—the one with his mouth, not his guitar—but songs that would emphasize it. They sought out old cuts like Mary Wells’ “The One Who Really Loves You” and The Penguins’ “Hey Senorita,” alongside contemporary tracks like “Cry Lonely” and “As Close As I Have Come,” by Nashville’s Gary Nicholson, to showcase his diversity—nostalgia meets freshness. These songs make the connection between the emotions Montoya finds on his fretboard and what he can bellow from deep within his pipes. If his mentor, the legendary Albert Collins, could see him now, no doubt he would be impressed with Montoya and his ability to keep delving deeper into the form. The State Room, 638 S. State, Dec. 31, 9 p.m., $50

People Under the Stairs
Los Angeles-based hip-hop duo People Under the Stairs knows a thing or two about bubbly. After a rousing speech by Double K at Thes One’s wedding in 2006, a case of un-drunk Champagne was found. Quickly, tops were popped and the duo, along with a huge entourage from the Los Angeles hip-hop scene, turned the second half of the ceremony into a freestyle rap session. Should you expect post-midnight freestyling tonight? Most likely. That, in addition to heavy hitters from the duo’s eight LPs, including the most recent, Highlighter, which they’re touring internationally in support of. The Urban Lounge, 241 S. 500 East, Dec. 31, 9 p.m., $20 NEW YEAR'S EVE GUIDE