Treasure Planet: James Cameron puts a ton of money—but not much writing ability—into the dazzling Avatar. 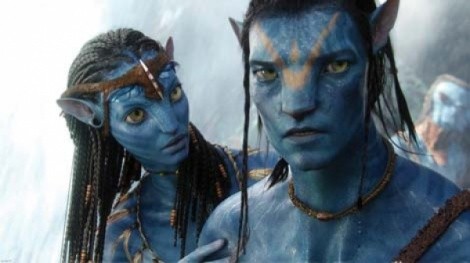 Do you really care how much it cost to make and/or market James Cameron’s Avatar? The entertainment media sure seems convinced that we do.

Of course, we’ve heard this all before—and curiously enough, most memorably, we heard it a decade ago when Cameron’s Titanic was on the way. Everyone thought they knew the price tag for that epic enterprise, and were just as convinced that it was somehow newsworthy. But after buying your movie ticket, have you ever found yourself more or less entertained based on knowing how much it cost to make the movie you just watched? As Michael Bay has proved over and over again, writing bigger and bigger checks doesn’t automatically make a director a better judge of a script, or any more capable of crafting a fundamentally sound piece of filmmaking. The story that matters—the only story that should matter—is what’s on the screen.

Cameron puts a hell of a lot on the screen in Avatar, but he still has to contend with something he can’t finance his way out of: his own limitations as a writer. His story here takes place in the year 2154, with humans having set up a mining colony on the distant world of Pandora. Newly arrived to Pandora after six years in cryo-sleep is Jake Sully (Sam Worthington), a paraplegic ex-Marine taking the place of his dead twin brother in a program that connects remote users to genetically engineered avatars by combining DNA from the human operator with the native, humanoid Na’vi. It seems the Na’vi aren’t fond of the Earth colonists pillaging their planet, and the avatars are meant to be ambassadors for peace and the scientific research team led by Grace Augustine (Sigourney Weaver)—except that the human security chief, Col. Quaritch (Stephen Lang), wants Jake to “go native” as a spy for a potential military assault.

Jake eventually falls for a Na’vi woman, Neytiri (Zoe Saldana), which allows Cameron to turn this into just the kind of star-crossed love story with which he’s clearly infatuated. For all his gee-whizzery, Cameron’s really an old-school melodramatist at heart, so it’s no surprise that he’d crib from something as sweeping as Dances With Wolves. It’s a bit more perplexing to realize that whatever nine-figure sum he spent on Avatar, he’s using it to rejigger the plot of FernGully.

That latter part is bound to get folks on the right-hand side of the political spectrum lathered up, because Avatar turns into about as clumsily obvious an analogy for rapacious Western imperialism as you could possibly imagine: The Na’vi are saintly natives mystically attuned to the rhythms of their natural world, to the point that they actually bind with other flora and fauna; the corporate boss (Giovanni Ribisi) chuckles about the stockholders wanting their profits to stay high, and appears unconcerned about letting a little genocide stand in the way of exploiting that next big mother lode. It’s one thing to craft an environmentally friendly fable, but when the script is as clunky as this one, every slice of message-mongering can make you feel like you’re being smacked upside the head with the script.

In fact, as long as no one in Avatar is talking, it’s a thoroughly mind-blowing experience. Never has the creation of an alien world felt this comprehensive—the air teeming with flitting insects, multiple plant and animal species given their own wildly original characteristics, floating mountain ranges creating a distinctive topography. And even after a 12-year layoff, Cameron still knows how to put together an action sequence with genuine cinematic pop, particularly the vertiginous flights of the dragon-like banshees. He’s a director in complete command of the visual side of his medium. He’s not just king of this world, he’s its deity.

It’s reasonable, though, to wonder what Cameron was doing with all that time before he actually had his technical team start firing up the mainframes. He put together a preachy story that depended on audiences feeling an emotional connection to blue-skinned aliens who copulate with their ponytails. And to give him slightly more credit, maybe it was after he looked at what he had on paper that he realized that there was a way to get a lot of ticket buyers to overlook those flaws: Give them something astonishing to behold, and be willing to spend a crapload of cash to make it happen.