A peek behind the scenes at what it takes to get ready for a drag performance.

by Colette A. Finney 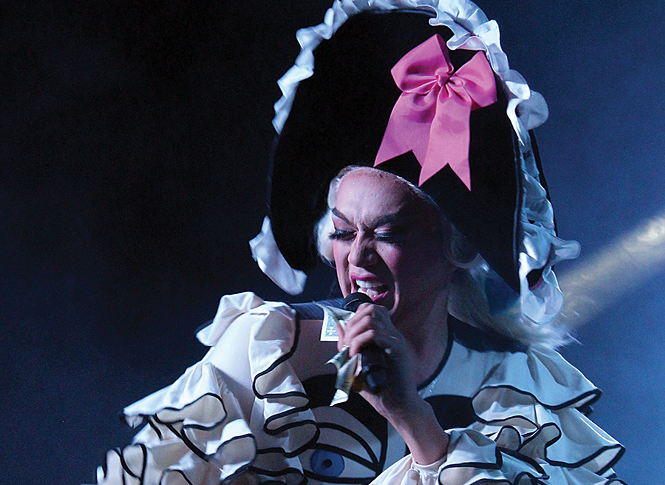 Drag queens at the top of their game don't slay the runway without tucking, ta-tas and a face painted for the gods, as witnessed behind the scenes at Manila Luzon's recent show at Metro Music Hall.

With Luzon as the headliner for the evening, the JRC Events production was hosted by local drag superstar Gia Bianca Stephens, and included a supporting cast of performers and a couple of DJs. One of the most popular queens to appear on RuPaul's Drag Race, three-time competitor Luzon has polished her persona to the point that she can take on any role thrown at her.

"A lot of planning goes into a show before you can even perform," Luzon says. "I like to do a lot of conceptualizing with coordinating what I am going to wear and what number I am going to do, so I can pack the bare minimum."

This night, however, there's little opportunity to pack in "pre-show" rituals aside from a shave and a shower. The majority of leftover time is devoted to layering on the make-up and custom couture in order to leave packed audiences gagging with glee.

Passing on "weird characters and accents" in creating Manila, Luzon is known for successfully straddling the line between glamour and camp with custom-themed gowns and signature white-streaked wigs, yet remains modest and joyful despite a shocking elimination from RuPaul's Drag Race All-Stars Season 4 earlier this year. "I am full spectrum when it comes to being nice or being a diva bitch," Luzon confesses between makeup pats. "It is so easy to be negative, but you want to spread positivity, and I am up for the challenge to push past the negativity."

Performing professionally for seven years, Stephens, reigning Miss Gay Utah, is quick to concur as she pulls on her sixth pair of tights and applies the final touches to her mug. "You don't do it because it feels good. You do it because it looks good," she says. "You gotta have big balls to do drag."

But it takes more than charisma, uniqueness, nerve and talent to fully embody the ultimate stage presence—it helps to have a trick or two hidden underneath the padding. While shablams and dancing skills come in handy, having a wealth of creativity can transform an average queen into a glamazon, while still allowing her to cross over into other avenues like recording music and selling merchandise. "The crazy thing about Drag Race is that it was a really amazing medium for me to express my artistic side," Luzon says. "From my background in arts and graphic design, it channels all through my drag now."

All the queens prepping for the show seem to have one trait in common: an endless vat of self-confidence. Fellow cast member Electra Jones sums it up best when sharing her mantra, "Being a queen is all about owning your own shit."

While the physical transformations at Metro are fierce and special, green room requests are few. Promoter Jordan Clements reports there generally are few secrets backstage. "People think any backstage location is some glamorous destination, but that's often not the case unless you're into looking like a disco ball from the hefty amount of glitter being thrown around," he says. "It's just a bunch of queens painting on a face, getting into their 'geish,' and rushing to make it to the stage on time."

Working alongside Clements, Kelly Sandberg, unofficial "Drag Momma" to all the queens, often tackles the most challenging tasks in dealing with a wide array of personalities. With backstage roles including assisting the talent while policing the off-limits area to keep overzealous fans from sneaking into dressing rooms, she's filled with funny stories of scandalous moments. Yet, Sandberg states the atmosphere offstage is very different than reality television, and decidedly not catty.

"The queens help each other get ready, loan costumes and jewelry and compliment each other constantly," Sandberg says. "You will see banter onstage, but also a fierce love and loyalty. We are all just a distorted family of misfits here."

However, being a professional queen is one of the most expensive professions out there. Besides a unique stage personality and lip-syncing realness, hundreds, if not thousands, of dollars can be funneled into perfecting a diva who is intent on working it.

For a multi-talented iconic queen such as Luzon, who turned the party up with slithering moves and sickening songs, the dedication is well worth it. "My drag to me is like a selfish experience in putting outfits together and getting all dressed up," she says. "One of the best experiences to come out of it is inspiring other people."