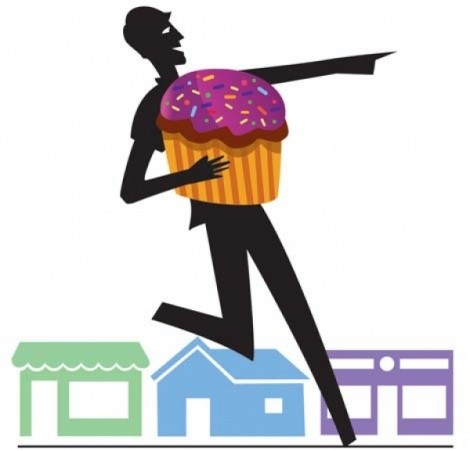 “Bakery Crawl 999.” That’s what I’m calling it; “BC 999” for short. The not-so-grueling event is inspired by the tradition of the pub crawl, but owes a debt to road rallies, pie-eating contests and Ironman triathlons. BC 999 requires competitors to walk nine miles in nine hours and visit nine bakeries. The rules, which forbid running, stipulate that pastries must be eaten at every stop. Success is measured in carbs and calories, not hours and minutes, so a winning strategy includes a meandering course, a thermos of coffee and at least two newspapers.

Earlier this year, the inaugural BC 999 began at Leslie’s French Pastries in Holladay with a pecan Danish. It ended downtown at Gourmandise with an almond Florentine.

At 8 a.m., Bill Leslie is too busy rolling out dough to chitchat. But, he is forthcoming about the secret of success of the 40-year-old business—“Do it the old-fashioned way.” He points to a well-used, bushel-size pot in which fudge for éclairs is made from scratch. As I leave, I buy one of Leslie’s specialties, a Scottish sausage roll. No other bakery makes them. I’ll give it to my mother.

The next stop, the Normandie Bakery, is a block or two east of the Cottonwood Mall wasteland. The decor and background music are as French as the croissants in the display case. The server apologizes: today’s signature Butter Dreams are still in the oven. She kindly delivers a spoonful of butter-cream frosting from the kitchen as proof of their superlative quality. I choose an almond croissant that the server assures me is “yummy.” The pastry has an almond-paste filling and a thick sugar glaze. Two cups of black coffee mitigate its sweetness. As my wife and I leave, we admire the frosted shortbread cookies that have no equal in the valley.

At 10 a.m. we arrive at Diva’s Cupcakes. On previous visits, I have found the cupcakes to be long on eye appeal and short on taste, so a cranberry scone looks to be the better choice. Instead, I impulsively order an almond croissant. (Comparing like pastries is encouraged by BC 999 rules.) We sit in the domed greenhouse within earshot of the babbling fountain, drinking coffee and reading The Salt Lake Tribune. The croissant has neither filling nor glaze, so it is much lighter and much less sweet. I prefer it to Normandie’s.

We then walk a few blocks to Glaus French Pastry Shoppe, a Salt Lake City mainstay for more than 50 years. Bill Leslie’s father got his start here. As I eye a tray of fruit tarts, a man with a cane comes in and is greeted warmly by name. What could be better than to be on a first-name basis with people who bake French pastry? The server offers me a free sample. I happily accept a generous wedge of chocolate cake with caramel frosting. As I eat it, she tells me that the most popular cake is chocolate rum with pineapple. Real rum? my wife asks. Rum flavoring, she replies sheepishly.

On the far side of Sugar House, we idle in the retro interior of Mini’s Cupcakes. The server suggests a City Weekly award-winner, “The Chocoholic.” Its rich, dark-chocolate character does not disappoint. The server tells us Mini’s strives to use ingredients (e.g. beet sugar) from local sources only. That Mini’s explicitly rejects shortening resonates with my butter-loving, Scandinavian soul.

We continue north on 1100 East, one of the city’s most interesting streets. Tulie’s is the destination. Not yet two years old, Tulie’s has the best-looking tarts (the edible variety, that is) in the city. Another favorite is a toothsome morning bun dusted with sugar. The display case includes bran muffins and bread pudding, but because all the chairs are taken, I take a frosted sugar cookie and coffee to go.

Heading west, on approach to Les Madeleines, I imagine pastry chef Romina Rasmussen, up to her elbows in butter, crafting kouing-aman, Brittany’s ambrosial confection of butter, flour and sugar. Each day she makes upwards of 200. Our arrival is ill-timed, however. The kouing-aman shelf is bare and the next batch is in the oven. Instead of waiting, I take coffee and vanilla shortbread to an outside table where I contemplate the uphill trudge to Backer’s Pastry.

The German bakery has held the high ground on South Temple since 1941. Of the nine bakeries, Backer’s is the only one in which the word “nutritious” appears in a sign. Backer’s is also the only bakery selling gingerbread men and glazed donuts. Nevertheless, I buy a cupcake. It pales in comparison to the Belgium-chocolate one at Mini’s, but it is one-third the price of Diva’s.

In a BC 999, sprinting to the finish line is poor form, so I amble down 300 East to Gourmandise and settle into a table against the wall. The café is crowded and noisy; too noisy, in the same sense that the Normandie croissant is too sweet. We should have finished at the Beehive Tea Room, where we could have lingered in solitude, soothed by a pot of tea and a plate of scones. Feeling slightly off-kilter in the Gourmandise din, I opt for a vitamin beverage—a cappuccino—and an almond Florentine. When the server delivers the crisp, tubular cookie, she tells me it is their only vegan pastry. Is it nutritious? She doesn’t think so, and it doesn’t have that pallid, good-for-you flavor. So, the first BC 999 ends on a happy, sugary note. Next year, we’ll add my favorite chocolate-chip cookies from the Salt Lake Roasting Company and attempt a BC Triple 10.

Private Eye is on vacation this week. Send feedback to comments@cityweekly.net