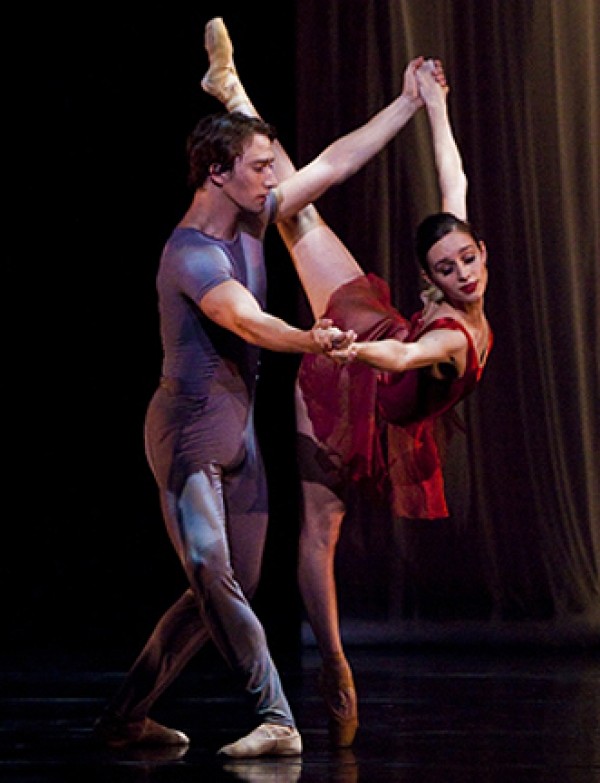 Spoiler alert: By the end of the ballet, someone has to die.

Not literally, of course; the dancers themselves are quite safe. But anyone familiar with Shirley Jackson’s 1948 classic American short story The Lottery—upon which Ballet West’s newest commission is based—knows full well that in the end, someone has to be stoned to death. That’s just the way this particular lottery works.

Ballet West Artistic Director Adam Sklute and choreographer Val Caniparoli made the executive decision to just get that out in the open, with the thought that it’s better if the audience is in on it from the beginning. Besides, most people are quite familiar with the story anyway. An embodiment of the power of the written word, it’s taught in school—sometimes surprisingly early—and one never forgets the experience of reading Jackson’s shocking conclusion.

For Caniparoli, that’s exactly why he chose it for his new creation. Sklute, for his part, was just as excited to try and pull off the climactic twist at the end. It’s the reason he chose to make the ballet’s premiere the centerpiece for Ballet West’s season opener, which also includes Nicolo Fonte’s Bolero and Helen Pickett’s But Never Doubt I Love.

In the beginning of the 30-minute The Lottery, though, it’s just another day in small-town America. As Jackson writes, “The morning of June 27 was clear and sunny, with the fresh warmth of a full-summer day; the flowers were blossoming profusely and the grass was richly green. The people of the village began to gather in the square, between the post office and the bank, around 10 o’clock …”

The staging for the ballet is quite simple. The set is an abstraction from the story, and consists of a bunch of rocks, park benches, weathered picket fences and gates leading into that central town square. The important thing for Caniparoli to capture, with the help of designer Sandra Woodall, was the conformity of the small-town atmosphere: Little white picket fences surround the town square on all four sides, creating a confining and almost oppressive ambiance upon the stage.

Finding the right music was a bit harder to accomplish. Stravinsky’s Rite of Spring initially seemed an obvious musical choice for Caniparoli, who sees The Lottery as a sordid take on a modern-day ritual. But the problem was in the details of the narrative. Stravinsky’s score is so pounding and ominous throughout that it has an anguished pull from the first notes. As demonstrated from the opening sentence noted earlier, The Lottery doesn’t have that. In the story, things begin serene and carefree, with the innocence of a small town—and that juxtaposition is crucial to the brutality of the stoning.

“It was just very difficult to find music that follows that trajectory, to have the subtle undertones that foreshadow the darkness of the ending,” Caniparoli says. “Then there was also the ending itself to deal with; it’s just so specific that it needed a score that was created specifically for it. Luckily, Adam agreed and was willing to go to the lengths to commission something. I had worked with Robert Moran before, and really believed that he could hit that delicate narrative balance. And he did, brilliantly.”

So, with the set and music in place, the only real dilemma was how to deal with such a strong climax appropriately. For Caniparoli, that is the best part of the ballet: the idea that the paper slips the dancers drew live onstage would actually determine the “winners” of the lottery. “From the very beginning, I wanted to capture the energy of that moment,” he says, “and I was excited to try to pull it off in dance.”

According to Sklute, the whole process of trying to make this live lottery a reality has been an intense and exciting experience for the company, and that energy is clearly felt in the performance. Caniparoli’s cast features 14 members, with revolving performance nights, so most of the company has had to learn the end of the ballet, which is a big solo for the person (un)lucky enough to die. So, no matter how big or how small a dancer’s part is in the rest of the work, he or she has to be prepared to take center stage and be the principal star for the finale.

“I can’t tell you the types of response I’ve gotten from the dancers when they’ve been in those situations,” Sklute says. “The adrenaline rush is crazy. You never know what people are feeling in the moment, so the drama is tangible from the very real excitement and anxiety that the dancers are having about potentially drawing the lot to perform this really hard solo.” Because, as the spoiler alert warned: By the end of the ballet, someone has to die.