Whether mailed in, dropped off or cast by machine on Election Day, voting in Utah remains safe and easy.

This election year, voting by mail—how to do it, why do it and its security—has come up again and again. The president has many times, and falsely, criticized the practice, suggesting it leads to fraud. But in deep-red Utah, which is sending a record 1.6 million ballots to registered voters, this is something election officials have been working toward for years. For Utah voters, voting by mail is now the norm, not the exception.

Why that's the case might puzzle some in this heavily partisan era. Utah bleeds red and other states that mail ballots to all voters—Colorado, Oregon, Washington and Hawaii—lean Democrat. The goal, however, according to election officials and voter advocates interviewed by City Weekly, all comes back to increasing voter turnout, something that, on the surface, doesn't seem very Republican.

Catherine Weller, co-president of the League of Women Voters of Utah, finds it interesting how vote-by-mail has become a partisan issue recently. "It's all a little bit puzzling," she said, since Utah's vote-by-mail laws were passed by a Republican-led Legislature and signed by a Republican governor.

Utah could be considered the outlier when it comes to mail-in voting. According to a Brookings Institute report, "Republicans fear mail balloting will increase votes for Democrats. They worry that individuals who are part of groups that typically vote in lower numbers will cast absentee ballots because of the ease of doing so. This includes young people, low-income people, minorities and those without access to transportation."

But that doesn't really jibe with Utah's Republican majority get-out-the-vote mantra. Additionally, Republicans, by and large, continue to win elections across the state (Salt Lake and Wasatch counties being the exceptions).

Utah's lieutenant governor and Republican gubernatorial candidate Spencer Cox spent a lot of his time in his position working to increase voter turnout. His Twitter feed during the 2018 election was almost a daily update on the state's voting numbers.

"One of my goals when I became lieutenant governor was to increase voter turnout," he wrote on Twitter last year. "I'm so grateful to legislators and county clerks that helped to make this happen. But mostly I'm grateful to all voters—new and old. The world is run by those who show up!"

"Utah has a real sense of civic responsibility," Weller says, noting that politicians and community leaders want people to vote and are committed to making it easier to vote. "Vote-by-mail is a way to do that," she says.

Utah Director of Elections Justin Lee notes that each registered active voter will receive a ballot via the mail this election season. Even before COVID-19 caused people to stay at home and avoid crowds, the state had been preparing for widespread voting by mail. "We've been transitioning to vote-by-mail ever since 2012," Lee says, "and this year, every county was going to run their elections by mail even before there was a pandemic ... for us, we haven't had to make too many changes, particularly for November."

Election officials across the state have been encouraging voters to use their mail-in ballots instead of waiting to vote in person at "vote centers" and polling places on Election Day. "It's more important than it's ever been that we do not have people show up at vote centers when they have received a by-mail ballot," Salt Lake County Clerk Sherrie Swensen tells City Weekly.

Voters can drop off their mail-in ballots at official drop boxes up to and including Election Day. Mailed-in ballots need to be postmarked by Monday, Nov. 2. Given the increase in mail-in ballots this year, county election officials such as Swensen hope voters will submit ballots as early as possible. That way, come election night on Nov. 3, counties can release early results.

"As soon as we get a ballot back, it's scanned in and the signature is verified," Swensen says. "We will release on election night ballots that have come in up and to Election Day. But on Election Day in 2018, we received over 90,000 ballots the very day of—that's between people in the mail, mailing them by the deadline, dropping them in drop boxes and even depositing them at the vote centers and obviously we can't get those in on election night."

The state also doesn't make any races official on election night. That doesn't happen until the canvas that concludes two weeks after Election Day. Despite what the president says about wanting to know results the night of, that's never officially the case.

Utah election director Lee says it's important for voters to keep expectations realistic on Election Day. While initial election night results might signal how a race will turn out, districts such as Utah's 4th Congressional District (where Democratic incumbent Rep. Ben McAdams and former NFL player Burgess Owens are facing off) are notorious for having close races, so voters might have to be patient.

"For most races, we still know fairly well what's going to happen on election night," Lee says. But, he stresses, "Election officials don't call races. We certify election results two weeks after the election. It's the media that likes to call races. For us, election night results are always preliminary—nothing's official."

If election results are still being tabulated after Nov. 3, Weller adds, there's no cause for alarm. "It's an indication of counties taking the time to properly count and process ballots," she says. "If we don't hear results immediately after Election Day, that's not necessarily a problem, and we shouldn't believe that it is. We should believe people are doing their jobs unless we've seen otherwise."

Unfortunately, in this election cycle, the vote-by-mail process has been plagued by misinformation. The president, for example, has insinuated it could lead to forgery or stolen ballots, but the numbers don't back that up.

According to a study from the Brennan Center for Justice, there is no evidence that suggests mail-in ballots increase fraud. The threat is "infinitesimally small," the report states. In Utah, election officials match a signature to one that's on file. Swensen stresses that it's a handwriting comparison. Voters don't need to worry about whether their signature on file with the clerk contains their middle initial or not, for example. The voter "would always be notified if there's an issue," she says. Even if a ballot goes to an address where the voter no longer resides, Swensen says, for someone else to use that ballot to vote, that person would need to forge the voter's signature.

"We're trying to reassure voters," Lee says. "There's really not any indication that there's any kind of widespread fraud or ballot tampering or any of those issues being floated out there happening in Utah. We've been doing this for a while, and it's safe and secure."

Not only that but you can track your ballot on the state's website at vote.utah.gov to make sure it was received and counted.

If someone is worried about using a mail-in ballot and decides instead to go to a vote center on Election Day, Lee says, some county clerks will give them a paper ballot and have them complete the same process they would have done by mail. Thus, the mail-in option remains the best in most cases.

Still, the misinformation campaign might be taking a toll, Weller says. More people than usual are telling her they're going to vote in person because they don't trust their ballot to make it to the clerk in time.

"That's one of the things I'm profoundly saddened by," she says. "Both because I think the postal service by and large is a very capable and good organization that's handled the ballots very well from year to year and because I'm concerned about the disinformation that makes people question their democracy when they shouldn't need to."

With Election Day just days away, Utah might still be the red state outlier when it comes to voter participation. But that's a good thing in the eyes of many.

"It's a very efficient way for people to vote," Swensen concludes. "Voters have time to get their ballot, review the candidates and the issues and make their choices—informed choices." 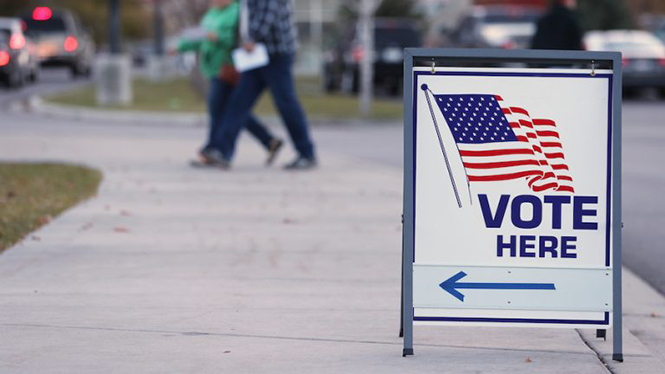 Observe and Report
What poll watchers can and can't do in Utah.

While most Utah voters will keep their distances and vote by mail this election year, there are still thousands who will vote in person at a vote center on Election Day. Whether they see any red MAGA-hat-wearing President Donald Trump supporters, though, remains to be seen.

"I'm urging my supporters to go into the polls and watch very carefully because that's what has to happen," the president said during the first presidential debate. That comment stirred up concerns on poll watching and voter intimidation. So, what does that mean for Utah voters?

Utah has laws outlining electioneering, the activity of trying to persuade people to vote a certain way. Anybody holding up signs and cheering, for example—has to be 150 feet away from a voting location. But there is a way for political parties and candidates to have observers at the polls overseeing the vote process, and they're known as poll watchers.

"We've always had poll watchers," Salt Lake County Clerk Sherrie Swensen says. "It isn't anything new," she says, noting they haven't had problems with it or had people acting out of order.

Utah Director of Elections Justin Lee says people are allowed to go to the polls and watch, and most observe ballot processing. "They just need to contact the county clerk in advance," he says.

According to Utah code, anyone can be a poll watcher if they register in advance. Things poll watchers observe:

• Setup or take down of a polling location
• Voter check-in at a polling location
• Ballot collection, receipt and processing
• Transmission or transport of ballots in an election official's custody
• Opening and inspection of a manual ballot
• Ballot duplication
• Voting machine logic and accuracy testing
• Ballot tabulation
• Storing and securing a ballot
• Post-election audits
• A canvassing board meeting
• A recount
• Certification of election results

A poll watcher is not allowed to electronically record any activity that would violate a voter's privacy or interfere with voting center processes nor can they divulge information related to votes cast for a candidate or proposition until results are made public.

If any form of voter intimidation does occur, voting staff knows to alert law enforcement. Swensen says they've also let local law enforcement know of the voting locations "just as a precaution," so, if the need arises, "they'll be there to help us."

"We have not experienced that," Swensen says about any voter intimidation. "I'm hoping we won't because I know we've heard a lot about it on the news." (Ray Howze)