Thanks to luck and a loophole, Utah is an unlikely hub for the nation's industrial banks

If you live in New York City and want to become the owner/operator of a yellow taxi cab, you would have to buy one of the city's 13,437 taxi "medallions," a coveted permit issued by the government that can cost up to $1 million.

Coming up with a million bucks isn't easy—even for a cabbie. Fortunately, taxicab medallions, like other big-ticket items in life, can be financed. And one of the places hopeful cabbies turn for financing is Medallion Bank, located at 1100 E. 6600 South in Murray.

Or, maybe you live in Michigan and your electricity bill arrives each month from CMS Energy Corp., a public utility that provides electricity to around six million of the state's 10 million residents, and you want to lower that monthly power bill by installing new double-paned windows and solar panels.

A loan for these upgrades could be obtained from CMS's own bank, EnerBank USA, located at 1245 Brickyard Road in Salt Lake City.

These two banks, along with 16 others located in Utah, are known as industrial banks, a niche form of banking that has existed for more than a century, and has clung to life through a narrow exemption in federal banking law that allows commercial entities to own banks. Through a sequence of circumstances, random good timing and some political lobbying, Utah has become the near exclusive home for these institutions.


With the heft of its industrial banks, which are also known as Industrial Loan Corporations (ILCs), Utah has emerged as a marquee state for financial services. According to statistics compiled by the Utah Department of Financial Institutions, which regulates industrial banks and other state-chartered banks, the Beehive State is the fourth-largest center for state-chartered banking in the nation, with $277 billion in assets anchored within its borders. Only New York, Massachusetts and California top Utah on this list. $143 billion of these assets are in ILCs held by corporations, like General Electric, Target and the Flying J truck-stop chain. 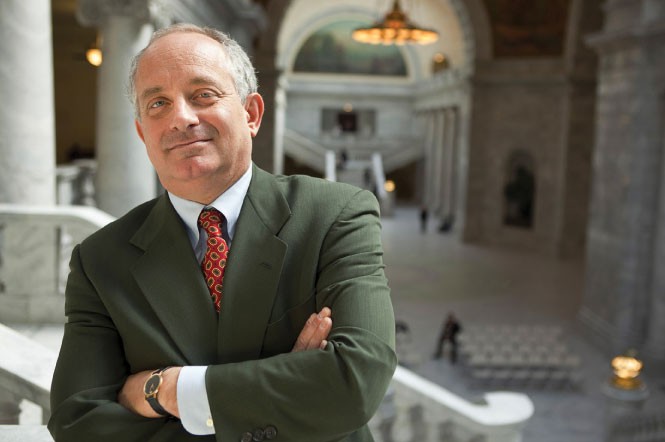 What these banks are and how they operate, though, isn't widely known outside of financial and political circles. In the past decade, the state of Utah and the lobbying firm Foxley & Pignanelli have become the largest cheerleaders for this arm of the banking industry, which according to Frank Pignanelli—a lobbyist, executive director of the National Association of Industrial Bankers and former Democratic legislator—directly and indirectly support thousands of jobs throughout the state.


"The only people that have ever said anything bad to me were outside the state, and they didn't know what they were talking about," says Pignanelli, who agreed to an interview at the state Capitol during a break from his lobbying duties during the legislative session. "Everyone in Utah seems to be enjoying the ride with them."

Blind-Ass Utah Luck: A History
Utah didn't set out to become the capital of industrial banking. It just happened that way.


Industrial banks got their start in the early 20th century, when industrial workers wanted to borrow money but found it difficult to do so from traditional banks. Seeing a need, titans of industry began issuing loans to workers.


As American banking laws evolved, one nuance in particular differentiated the United States from much of the world: the idea that banking must be severed from commerce, a concept that was cemented into law in 1956 with passage of the Bank Holding Company Act. Conventional U.S. banking wisdom holds that a corporation, if allowed to own a bank, could undermine the safety and soundness of its bank by overborrowing or encouraging irresponsible lending to close allies. Industrial banks, though, existed in Utah prior to the establishment of this prohibition and were grandfathered in. To this day, Utah's industrial-bank charter is exempt from the Bank Holding Company Act.


Over the years, a number of safeguards have been put in place to ensure that industrial banks aren't undermined by their parent companies. Chief among them are prohibitions that restrict the direction in which money can flow. This means that a holding company such as General Electric—which has a Utah-chartered industrial bank—cannot receive financing from its bank, but it can funnel cash into the bank. (General Electric announced on April 10 that it intended to sell portions of its banking operations. A G.E. spokesperson declined to comment on whether the company's Utah-based operations, which has $22.6 billion in assets, would be impacted.)


This fact, industrial-bank advocates say, stands as proof that corporate profits can and should capitalize banks and float credit to consumers. Far from being a point of weakness, Pignanelli says, corporate ownership is one of the ILC system's strengths, and should be encouraged and embraced by the rest of the nation.

The industrial-banking world really began to gather steam in 1982, when a new law, the Garn-St. Germain Depository Institutions Act, named after former Utah Republican Sen. Jake Garn, allowed industrial banks to apply for insurance from the Federal Deposit Insurance Corporation (FDIC). In 1987, the Competitive Equality in Banking Act (CEBA) narrowed the field of industrial banks substantially by requiring that states have laws either on the books or under consideration stipulating that industrial banks carry FDIC insurance.


Utah was among seven states that fit into this category.


Around this same time, Pignanelli and his partner, Doug Foxley, arrived on the scene. As Pignanelli tells it, he was approached by several industrial banks, and recalls being told that if Utah laws could be tailored to their needs, industrial banks could become a $100 billion industry within a decade.


Pignanelli says he set out to change the laws, and the industry blossomed. Scores of laws relating to Utah's financial institutions were altered during the 1990s, but it's unclear which specific laws were responsible for generating rapid growth in the industrial banking community. "They predicted that we could be within $100 billion within 10 years if we changed the laws, and we'd become a center of finance for the country," Pignanelli says. "And they were wrong. It wasn't $100 billion in 10 years; it was like $100 billion in like two years. All of a sudden, all of these companies said, 'This is the place to do banking.'"


In addition to benefits derived from corporate ownership, industrial banks enjoy another perk: being exempt from the Bank Holding Company Act. By operating outside of the act, the parent companies of industrial banks aren't regulated by the Federal Reserve. Instead, the FDIC and, largely, Utah's Department of Financial Services, regulate them.


"State regulators are very firm, but they're very fair," Pignanelli says. "They tend to be viewed as a little more responsive as to where the economy is and things like that."


Darryle Rude, chief examiner with the Utah Department of Financial Institutions, says that state regulation is "less onerous" than federal oversight. Federal Reserve oversight, Rude says, "would be like you going to get your driver's license renewed once every three years, but instead of going to the DMV, you also had to go to Sandy City or Salt Lake County to get that same license from two other people. It's just the process of dealing with another regulator and another bureaucracy."


While there might be some tangible benefits to keeping the Federal Reserve off of a bank's back, according to George Sutton, former commissioner of the Utah Department of Financial Institutions, lack of oversight by the Federal Reserve is not what fueled the growth of these banks.

Sutton is now an attorney representing roughly half of the state's industrial banks. During the rapid rise of industrial banks in the early 2000s, Sutton says, he was on the phone for an hour each day fielding calls from companies across the country contemplating entering the banking business.


Utah had earned itself a sterling reputation as a good place—and, by then, one of the few places—to set up these sorts of banking shops, Sutton says. "It's really a matter not of changing your laws, but building that kind of credibility in the marketplace," he says. "That's what brings the business."


During this heyday, all kinds of banks were opening in Utah. Some of the first, Pignanelli says, were AT&T Universal Card, GE Capital Bank and Federal Express Centurion. Scores of banks—such as BMW Bank, Pitney Bowes Bank, Sallie Mae Bank, Target Bank and Comenity Capital Bank, to name a few, followed suit.


Everything was chugging along just fine, and assets skyrocketed to a 2007 peak of $223 billion. Then, in 2005, the world's largest retailer, a politically polarizing giant named Walmart, applied to become a Utah charted industrial bank.

The Big Bad Wolf
Plenty of stories have been written about Walmart and the destruction it has wrought on small businesses with its aisles of cheap goods stored in acres of neon-lighted consumer warehouses.


The same fear that might sweep across the face of a small-town grocer upon hearing that a Walmart is breaking ground on the outskirts of town also gripped the nation's community-banking industry when it found out Walmart had set its sights on banking in Utah. If Walmart were allowed to enter the banking industry, would it wipe out America's small-town banks?


National banking associations and even the Federal Reserve raised this concern, contending that the inability of federal watchdogs to regulate parent companies of industrial banks presented a "blind spot" that, if left unchecked, could rain chaos on the nation's financial sector.


In testimony before the House Subcommittee on Financial Institutions and Consumer Credit in July 2006, Scott G. Alvarez, general counsel of the board of the Federal Reserve, said the rapid expansion of industrial banks created a potentially unfair opportunity for corporations to gain access to the federal banking safety net. He urged Congress to either close the Bank Holding Company Act exemption that permitted industrial banks to exist, or to create rules that would allow other banks to operate in a similar fashion—meaning their parent companies could be involved in commerce.


"If Congress does not address the ILC exception, the nation's policies on banking and commerce and the supervisory framework for corporate owners of insured banks are in danger of being decided for Congress through the expansion of this loophole by individual firms acting in their own self-interest," Alvarez said. "The board believes that the decisions on these important policies, which influence the structure and resiliency of our financial system and economy, should be made by Congress, acting in the public interest, and then applied to all organizations in a competitively equitable manner."


Another important issue raised by Alvarez was the close ties industrial banks have to their parent companies. The parent company of a typical bank that accepts deposits at a drive-thru window and offers lollipops to children is watched closely by the Federal Reserve to ensure no actions are taken to jeopardize the soundness of the bank.


But in the case of an industrial bank owned by a company like BMW, Target or General Electric, the Federal Reserve has no authority to peer in on the books.


While officials in Washington, D.C., and banking associations across the country were sweating over industrial banks, bankers in Utah were left scratching their heads over the controversy.


Howard Headlee, president of the Utah Bankers Association, says his counterparts across the country were acting out of fears surrounding an industry that they knew nothing about. "We understand what the industrial bank charter can and cannot do, and we understood the risk they were responding to was not real," Headlee says of the national uproar surrounding Walmart's bid to enter banking.