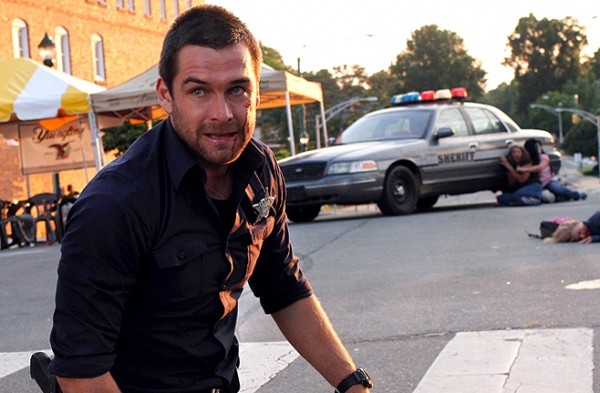 Series Debut: No, it’s not about an X-Men ginger; this action-drama from True Blood’s Alan Ball is set in Banshee, Penn.—Amish country (if Amish is the next TV wave, at least it’s a step up from rednecks). A fresh-outta-prison con man/martial artist (Antony Starr) rolls into town and assumes the identity of the new sheriff who never arrived, what with being murdered and all. But he’ll have to deal with his former crime partner (Ivana Milicevic), who’s also hiding out in Banshee, as well as the Ukrainian gangsters who want him dead and the local powerbrokers who, rightfully, don’t trust him before he can swindlethe townies. Like True Blood, Banshee stylishly splatters mucho sex, violence and bizarre characters (sample: “Dangerous transvestite computer hacker”) against a small-town backdrop; unlike True Blood, most of it makes sense. This could be the splashy original that finally breaks Cinemax from “Skinemax.”

Season Premiere: It would be futile to even try to add to the Girls hype, so here’s what you need to know: Creator/writer/star Lena Dunham lost some weight, deal with it; the men play a slightly larger role this time around; the women still don’t know how to properly deal with them, or much of anything else; if you loved and hated and re-loved Season 1, you’ll love, hate and re-love Season 2. As for fellow second-year dramedy Enlightened … at least Laura Dern has a lead-in audience now.

Shameless
Sunday, Jan. 13 (Showtime)
Season Premiere: Still broke, still filthy, still twisted, wrong and funny as hell—if ’Merica were honest with itself, the Gallaghers would the nation’s No. 1 modern family, not Modern Family. Catch up on Shameless, already.

House of Lies
Sunday, Jan. 13 (Showtime)
Season Premiere: Picking up a few weeks after management consultant Marty (Don Cheadle) shot down his enemies within Galweather & Stearn and may or may not have had a drunken horizontal merger with his teammate (Kristen Bell), House of Lies gets back to pissing on corporate avarice and doublespeak—while awkwardly celebrating it. The show had almost zeroed in on a solid point of attack by the end of Season 1, but the first episode of Season 2 suggests a softer, soapier direction. Did they make the mistake of bringing in consultants? Damn it …

Californication
Sunday, Jan. 13 (Showtime)
Season Premiere: It’s not a spoiler to let on that Hank (David Duchovny) didn’t die from last season’s cliffhanger O.D., right? Season 6 finds the erstwhile writer/debauchery magnet stumbling into depression, rehab (had to happen eventually) and, get this, a musical stage version of his novel God Hates Us All being pitched by a genius/lunatic rock star (genius/lunatic Tim Minchin). Minchin not only elevates the eccentric British rocker cliché to hysterical new levels, but also reignites the series’ creative, rock & roll fire that’s dimmed somewhat over the past couple of seasons (you’re still missed, Lew Ashby). If, as all involved have hinted, this is the final run for Californication, it’s going out the way it was meant to: loud, proud and probably naked.

Continuum
Monday, Jan. 14 (Syfy)
Series Debut: There’s a lot to like about Continuum, a Canadian import about a year-2077 cop (Rachel Nichols) hunting time-traveling terrorists in 2012 to preserve the future’s timeline (even though that future is, wait for it, dystopian): smart story, cool effects, etc. But also, something The Only TV Column That Matters™ has been waiting for: the return of Lexa Doig (Andromeda, Stargate SG-1)! Oh, Canada!