Looking for cocktails, a dance floor or a quiet corner? these spots will pass the test 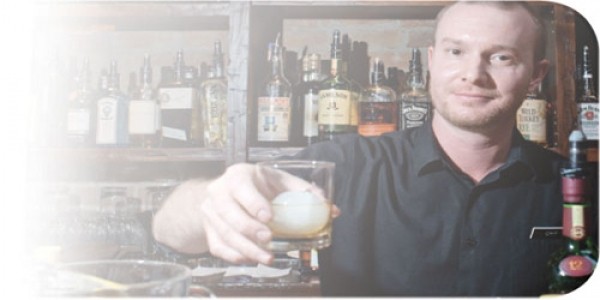 There’s no better way to take the temperature of a city than to look at its bar scene. And Salt Lake City’s continues to grow: More bars open every year, next to old stalwarts that’ve been pouring the strong stuff since the days of the pioneers. We’ve organized the bars by general geography—downtown and farther-flung spots. No matter where you are, or where you want to go, there’s a cold one waiting for you.

HEART OF THE CITY
If you want to be where the people are, downtown is the place to be. At lunchtime, rub shoulders with workers taking a break or plotting deals; on a weeknight, join the collective sigh of relief as 5 o’clock comes at last. And weekends are when Salt Lakers really let loose: college kids spilling out of bar doorways, music-lovers packing dance floors, men and women catching glances across the bar. If you strike out, just head down the street to the next watering hole.

Inferno Cantina
This tequila bar sports flaming torches outside and tasty Mexican cuisine inside—try the carne asada burrito. There are plenty of cheap cerveza deals, too, like the Tecate and tequila shot combo for a measly $5. After 10 p.m., there’s usually a nice mix of DJs spinning Top 40, hip-hop and house. 122 W. Pierpont Ave., 801-883-8838, InfernoSLC.com

Cheers to You
It’s hard to say think of a better spot to loosen the tie than Cheers to You, one of downtown’s favorite spots for an after-work cocktail. The most secluded booths in town can arguably be found here, and there’s a nice sampling of pub grub, like meatball sandwiches and French dips. There’s also free pool on Thursdays, and you’d be hard-pressed to find a more packed bar during Friday-night karaoke. 315 S. Main, 801-575-6400, CheersToYouSLC.com

Whiskey Street
From the minds of the people who brought you Bourbon House, Whiskey Street hearkens back to the golden days of drinking. Taking its name from Main Street’s pre-1906 designation, Whiskey Street is a large bar, with gleaming wood and shiny liquor bottles as far as the eye can see. But if the massive wall of bottles (seriously, it requires a ladder) and the 72-foot-long bar somehow don’t impress you, the top-notch cocktails and food (think Parmesan truffle fries and rosemary lamb chops, not bar snacks) definitely will. 323 S. Main, 801-433-1371, WhiskeyStreet.com 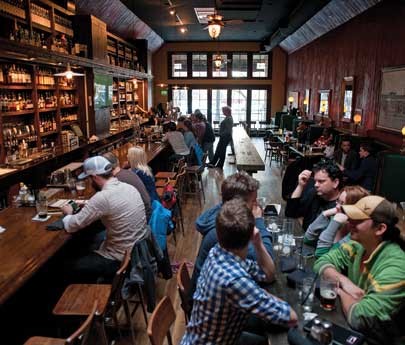 Kristauf’s Martini Bar
Kristauf’s serves upscale drinks in a swanky atmosphere, complete with a lounge-y dance area in the back. It has a Sex and the City vibe so strong you’ll half expect to see Carrie and the girls sipping their Cosmos at the bar. Although Kristauf’s has no dress code, it’s the perfect place to get all dolled up for a ladies’ night out. The menu has every martini imaginable, from the classic lemon drop to the Konsummate Kristauf’s: a Grey Goose martini with St. Germaine elderflower liqueur, honey water and lemon juice. 16 W. Market St. (340 South), 801-366-9490, MartiniBarSLC.com

Area 51
No downtown club parties quite as hard as the folks over at Area 51. There are themed costume nights suitable for all tastes, such as the monthly vampire night or the Fetish Ball. And the fact that there are two bars, three dance floors and three patios guarantees that there’s plenty of room for everybody’s wildest and weirdest fantasies. 451 S. 400 West, 801-534-0819, Area51SLC.com

The Hotel
This club brings the heat with four different clubs combined into one. The weekends usually feature a smattering of every genre: hip-hop sets in The Lobby, Latin Night in the conjoined Club Elevate, house and electro in the Opium Lounge, and live music in the newly remodeled Barrel Room. 155 W. 200 South, 801-478-4310, Facebook.com/TheHotelClubElevate

The Tavernacle
The Tavernacle has everything you could ask for in a piano bar: dueling pianos, karaoke, golden oldies and an all-requests show. The show starts at 9 p.m., and has strict PG-13 guidelines until 10 p.m. But after that, it’s all about having a good time with the crowd’s favorite singalongs. It’s usually packed on the weekends, so making a reservation is suggested. 201 E. 300 South, 801-519-8900, Tavernacle.com

Poplar Street Pub
The best thing about Poplar is that it’s always busy, but never overly crowded—probably because it’s huge inside. The front room has a laid-back pub feel, and there’s live music on the weekends. The main bar is located in the middle room, which occasionally turns into a spontaneous dance floor. Pool tables and bar stools fill the back room, and the highlight of Poplar is the outside patio, which has its own bar that always provides super-fast service. 242 S. 200 West, 801-532-2715, PoplarStreetPub.com

The Vault (Bambara Bar)
At face value, The Vault, inside the Hotel Monaco, is a typical hotel bar, albeit an upscale one. Regular visitors, though, know the space offers a lot more than a generic spot to grab an anonymous drink. During Oscar season, the bar regularly creates themed cocktails to go with each of the nominated movies, and Christmas time means ordering a Santa’s Little Helper, a hot drink that’s the best thing by that name since the Simpsons’ dog. Throw in some of the housemade chips adorned with blue cheese from the adjacent Bambara restaurant, and you’ll never want to leave. 202 S. Main, 801-363-5454, Bambara-SLC.com

Bodega
Taking up residence on Main Street in 2013, Bodega’s storefront is a small convenience shop and diner for cheap tacos. But the real treat is the hidden downstairs gastropub, which will transport you to a different time period, as well as give you a dining experience unlike any other. 331 S. Main, 801-532-4042, Bodega331.com

Maxwell’s East Coast Eatery
Maxwell’s might be the most dichotomous bar in Salt Lake City. On weeknights, it’s a relaxed sports-bar/pizzeria, with poker and $2 wine on Tuesday nights. But stop by on a Friday or Saturday night, and you might feel like you walked onto the Jersey Shore. The laid-back eatery transforms into a nightclub, complete with bedazzled denim, acrylic nails and the bumpin’-est, grindin’-est dance floor downtown. 357 S. Main, 801-328-0304, MaxwellsECE.com

Zest Kitchen & Bar
Zest Kitchen & Bar is a delicious anomaly offering a full bar of creative, hand-crafted drinks, local wine and beer, and a menu featuring sustainable vegetarian, vegan and gluten-free dishes. Zest is making a name for itself in the DJ scene, so you can dance the night away while enjoying a High West whiskey sour made with lemon-ginger kombucha. 275 S. 200 West, 801-433-0589, ZestSLC.com

Metro Bar
One part hipster, one part gay and one part drag queen, Metro has a little bit of everything. Thursday hosts the ever-popular Dance Evolution, and Saturday’s gay night is becoming increasingly popular. But no matter what night it is, the large bar has a variety of sections, plus a good-size smoking patio, to let you build the experience you desire. 540 W. 200 South, 801-652-6543, Facebook.com/MetroBarSLC

Murphy’s
Billing itself as “a step down in social clubs” due to the subtle descent from SLC’s Main Street leading to the door, Murphy’s is a long-running downtown favorite. Despite the name, it’s not a traditional Irish pub, but you can certainly find an Irish stout or shot of Irish whiskey, as well as a wide array of beers of all prices. This is a place for conversation with friends—a jukebox provides the primary entertainment—and the food is better than regular pub fare. Be sure to delve into a Wolven burger when you visit. 160 S. Main, 801-359-7271, MurphysBarAndGrillUT.com

Johnny’s on Second
Long day at work? Boss got you down? Well, blow off some steam with a $4 shot & beer combo, or a plate of $4 cheese bread. Johnny’s On Second is all about great deals in a no-judgment, laid-back atmosphere. There’s never a cover at this after-work hangout, and almost every day of the week, there’s something to get excited about. Check out karaoke on Wednesdays, poker tourneys on Thursdays and DJs every Tuesday and Friday. 165 E. 200 South, 801-746-3334, JohnnysOnSecond.com 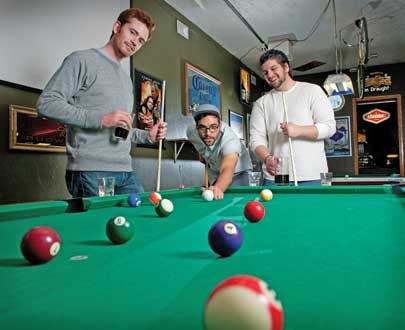 Circle Lounge
Sometimes a dance club is all the better when it’s more intimate than expansive, and that’s the case with Circle Lounge. It’s been a popular spot for well-dressed partiers since it opened, packing the place regularly to the sounds of hip-hop and house music. And if booty-bumpin’ with the beautiful people isn’t your thing, Circle Lounge has welcoming booths and an excellent outdoor patio for people more interested in enjoying the resident sushi bar or smoking a hookah. 328 S. State, 801-531-5400, Facebook.com/CircleLoungeSLC

The Green Pig Pub
A downtown hotspot since it opened, The Green Pig Pub has a little bit of everything. Evenings are filled with live music, from epic blues jam sessions on Mondays to dance DJs and local bands taking the stage on weekends. Utah Jazz game nights and fall weekend days bring sports fans in droves to watch the many TVs and dig into a fat Sunday brunch buffet. 31 E. 400 South, 801-532-7441, TheGreenPigPub.com

The Red Door
Much as Salt Lake City used to be a wasteland for coffee lovers, there was a time before high-quality, high-octane specialty cocktails were available all over town. The Red Door helped pioneer our new, better-boozing ways by offering a wide array of flavored martinis and top-shelf scotches and bourbons in its intimate environs. Drinking to a soundtrack of downtempo house music or live jazz only adds to the sophisticated vibe that continues to this day. 57 W. 200 South, 801-363-6030, BehindTheRedDoor.com

The Beerhive
A buzzing downtown favorite, The Beerhive offers an incredible array of beers along with all the usual cocktails. Belly up to the ice bar for a cheap yellow beer or pricey import, or hit the street-side patio during the warm months—inevitably, you’ll find yourself discussing the finer points of the various brews on hand. A game room downstairs and decent food options conspire to keep happy-hour visitors at The Beerhive until closing time. 128 S. Main, 801-801-364-4268

One Night Club
If P. Diddy and his Ciroc Boys needed a place to get loose while in Salt Lake City, they would undoubtedly choose One. This downtown Vegas-style club features the full shebang of high-end amenities: hookah service, photo booths and plenty of VIP seating. Check out Turn Up Fridays for the P. Diddy-est of nights. 180 W. 400 South, 801-214-6180, Facebook.com/OneSLC

Bourbon House
Located in the basement of the Walker Center in the heart of downtown, the space that now holds Bourbon House has been a bar for years. Only in its latest incarnation, though, did it focus on the namesake liquor, and SLC is the better for it. Cheap deals on Jameson and Maker’s Mark are always a treat, and the Pickleback shots (exactly what it sounds like) aren’t found in many bars. The menu helps Bourbon House stand out as well, with weekly specials on Juicy Lucy burgers and Philly cheesesteaks, along with the gotta-try-’em bacon- and jalapeño-wrapped tater tots. 19 E. 200 South, 801-746-1005, BourbonHouseSLC.com