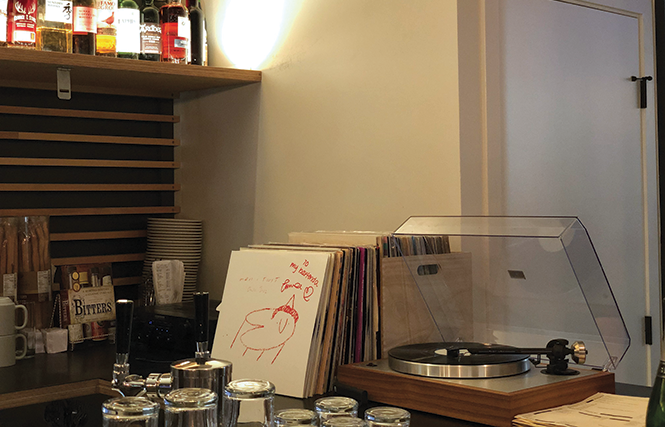 At Seabird, The Low End Theory by A Tribe Called Quest spins on vinyl behind the bar, on the second to last day of 2019. It's a chilly day that spurs me to immediately order a hot toddy from Matt Cantu, the bartender on duty who has been working in and managing bars around the valley for years. But this is his first time managing a vinyl bar—and at that, the only one in Salt Lake City.

Popularized in Japan in the 1950s, vinyl bars originated as small hole-in-the-wall type joints where patrons sit and drink anything from cheap beers to high-end whiskey, while listening intently to vinyl records being spun either behind the bar or by a DJ. Seabird works off the same model.

"It's very hard to find these bars," Cantu says of the original Japanese bars, which one of Seabird's owners, Asher Seevinck, frequented on trips to Japan. "A lot of them are hidden in these giant buildings and just have a symbol. And so you look at our symbol we have there—the seabird—we have the needle and the record for the head, and then the jigger is the body and the wings thrown on to make the seagull for our seabird," Cantu explains, gesturing at a nearby banner.

Everything about the bar is quite thoughtful like this. Vinyl is stacked on shelves around the bar, which is minimal—keeping the small space from feeling cramped or stuffy—with a big window that looks down into the water fountains in The Gateway's Olympic plaza. The menu is a puzzle; you have to turn it this way and that to read the lists of booze and cocktails. It's like a spinning record.

As I sip on a very hot hot toddy, Cantu changes the record to something more instrumental, quieter, for conversation's sake. "This is one of my favorite records that we carry right now. I really like them, they're called Khruangbin," he says. "It's Thai for 'airplane.'" The album is The Universe Smiles Upon You, and I know I've heard it before. But I'm not here just to listen, but to find out how the American venture into the world of vinyl bars is working out in SLC.

A 2019 New York Times piece by Ben Ratliffe outlines the shaky process of introducing vinyl bars in the states, which is mostly being attempted on the coasts. The bars he mentions, such as LA's vaunted In Sheep's Clothing, sound a tad snobbish, veiled in pretension. Like Seabird, however, they are confronting the way bars are viewed as places to talk to others, not to sit quietly and listen. Ratliffe notes, "Recorded music is a compulsory extra [in bars], but generally ignored or appreciated in flickers. Even those who know something about the purpose and origin of the listening bar may not be ready for it."

Cantu, though, provides some insight into how Seabird is working, albeit in a particularly American way. When asked if people ever sit and just listen to the records, he heartily says that they do—and that often, the people coming into the bar and noticing the music are musicians themselves, roadies or light and sound technicians coming from nearby venues like Metro Music Hall, The Complex or The Union, often on their way to stay at The Hyatt.

He hands me a record he got a few weeks prior from a touring act, signed "To My Bartenda." It turns out to be one of my own favorite albums of 2019, Men I Trust's Oncle Jazz. Cantu relates how nice they were, and how stoked they were on the music playing in Seabird. They often also get attendees of the shows, who, whether they know each other or not, get to talking about the music they just saw.

"I think that people are really starting to appreciate listening to the whole album, because I think that really got lost with iTunes and Spotify ... You listen to an album, and it's like the artist's way of giving you the whole story," Cantu says. "Here, it's never, like, 'Play this record and play this one song.'" He gestures at the needle next to him as if about to change the song on the spinning record, which is hooked up to a Marantz amplifier, the music coming out of vintage refurbished JBL speakers. "A lot of times I'll play the first half, and be like, 'Do you guys like this, do I flip it? Do I skip it and get something else in there?'"

It seems that Seabird demonstrates a particular, very American take on the vinyl bar, one that is still undeniably social. There are nights dedicated to just listening, though. Prolific local record collectors like DJ Finale Grand, DJ Sneeky Long and members of the International Society of Rock N' Roll have had vinyl listening parties, where talk happened during the silent switch between records.

"The warm sound of the speakers, the change of the needle on the record, the fact that it stops, there's that long period of silence," Cantu says, describing those moments of beginning and end of music, silence and conversation. Where digital music is often background noise, and live music is still disrupted by a crowd's babble, vinyl bars like Seabird offer a space for thoughtful listening, where conversation is merely an option.