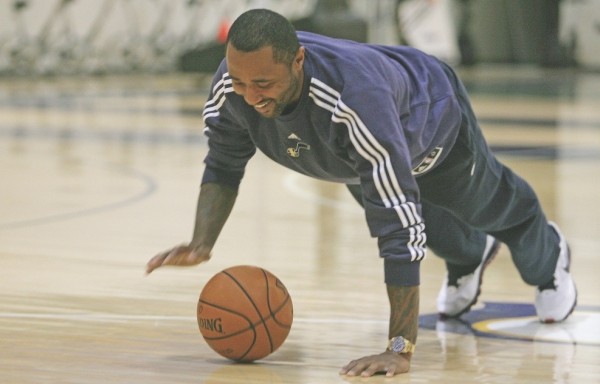 Even if you’re short and uninterested in basketball, you can still learn something from the Utah Jazz—not necessarily from the players, but from the way they warm up and train.

Jazz players warm up thoroughly before every practice or conditioning session. Their warm-up, like their physical conditioning, is the product of Utah Jazz head strength & conditioning coach Mark McKown, currently in his 16th season with the Jazz.

Any pro team’s results are affected by the talent of the strength & conditioning staff, and McKown is considered a brilliant coach. He’s known for training players to do several things at once, working the body as it is actually used during a game. A player may be running down the court while also twisting the hips to dodge traffic and flexing the arms to receive the ball.

McGown’s technique and his unique exercises can also work for you, even if you’re not active. He says, “You need good trunk (core) mobility, whether you’re an athlete or not, simply to function efficiently.”

Most commercial gyms that have courts will lend out basketballs for the asking. McKown suggests that those who aren’t in shape can start by dribbling the ball while running or walking. “We do dribble drills to warm up. The thing is, if you don’t have adequate skills, you may not be able to move fast enough to elevate your heart rate,” he says. A good warm-up should get the heart going, even if briefly.

He also advises doing crunches while holding the ball above your head. This pounds your abs and the oblique muscles (on the sides of the abs) with more force than regular crunches.

McGown suggests an exercise that is a variation of the well-known Mikan Drill, named after legendary player George Mikan. “Pass the ball between your legs, which makes you flex your knees and flex at the waist,” he says. “Take a longer stride than usual, step forward with the right leg while holding the ball in the left hand. Pass the ball between your legs to the right hand, then bring it around while stepping forward with the left leg, then pass the ball from the right hand to the left hand between the legs. Go from one end of the court to the other, or one side of the court to the other side.”

Basketball players and most other serious athletes also work on their vertical jump. “It’s a good indicator of lower-body vertical power,” McKown says. It’s also an excellent exercise for skiers and snowboarders, because the same muscle sequence—and power—is used while making turns.

Here is a good way to practice and greatly improve your vertical jump. First, stand close to a wall, reach up as high as possible and touch the wall. Note the spot or hold a pencil and make a mark to show the top of your reach. Do this in a place where it’s OK to leave chalk fingerprints, and where they won’t be disturbed. If using a wall in your home, tape paper over the area you’ll be touching.

Next, get chalk and rub it over your fingertips. Squat down with your spine straight up and down, and prepare to jump up.

The point of a vertical jump is to push hard off the floor with your feet, and let the force of that acceleration move up through your body. As you jump up, sequentially drive your calves, thighs, hips, core, back, shoulders, arms and hands upward. Feel the acceleration as it moves up. Touch chalked fingertips to the wall at the peak of the jump.

Practice the vertical jump two to four times a week. You’ll notice the chalk marks keep getting higher. You’ll be building lower- body speed and strength. Speed and strength in combination is known as power. Hey, isn’t that something you want?