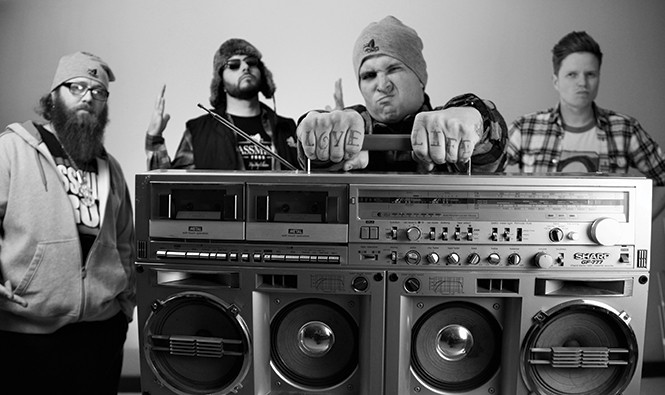 The sound of static, then that of a radio being tuned. An announcer intones: "In a world without real hip-hop, live in-studio, it's The BMP Pirate Radio Takeover Show!" More static as the dial moves. A velvet-voiced smooth-jazz DJ says, "That was Herb Bangcock's new single, 'Hip-Hop Love,' here on KWBMP 80.1 FM, home of soft hits and big—" A knock cuts off the DJ's chatter. "It's BMP, mo-fo!" Sirens, and a scuffle.

"Do not adjust your dial! BMP has control of the airwaves! This is the joint that started it all!"

That's a lot of noise for a Tuesday morning, pre-coffee. It leads to uncharitable thoughts like, 'Oh, great. Buncha honkies from Ogden playing at hip-hop, believing that their genesis was a landmark event.' The eject button began to look, as that snack-happy YouTube kid says, "gooder than a bitch."

A needle scratches vinyl (in a bad way). A robot voice says, "Let's go to work." A needle scratches vinyl (in a good way). The first words out of BMP's mouths? Their own name. (Why does every hip-hop artist do that?) A woman sings, repeatedly, "BaaaassMiiiint Proooos." The group identifies itself yet again, and reiterates the imminent cultural flashpoint that is their own existence.

To be fair, the track is called "Intro/BassMint Pros," so the solipsistic stuff is perhaps justified. But now, a different emcee is up. His flow is smooth as he rhymes about his group—er, collective—while the woman from before continues to sing BMP's name. Then, surprises: a beat from Gary Wright's "Love Is Alive," a guitar lick from Huey Lewis' "Heart and Soul," the watery hook from Lou Reed's "Walk on the Wild Side."

The next 72 minutes are crammed with hypnotic beats, sly rhymes, comedy skits and copious samples. There's movie dialogue ("Nobody tells DJ Request what to play!"), bits of radio shows (Casey Kasem's profane America's Top 40 rant) and more odd bits of music (Rush, AC/DC, Depeche Mode, Eddy Grant). Suddenly, this is fun. A sampled line from Mr. Show sums it up: "Can I get a fuckin' A?!"

Typically, hip-hop artists get slammed for sampling other acts' songs. In a lot of cases, the criticism is deserved: Any fool can mix clips into something that's nice to hear and ultimately forgettable. With Takeover, BassMint Pros deftly blends hip-hop, classic rock, comedy, political commentary and local references into a compelling, irresistible listen. Which is some trick, because all of this could easily have resulted in a big, self-referential, self-important mess.

Fortunately, The BMP Pirate Radio Takeover Show just wants listeners to have a good time. It's that simple, clear concept and the relentless creativity of the collective, that makes Takeover a resounding success.

About the "collective" thing: BMP is more than the core four of Beatnic da Diabolik, Ransom, Mad Max and Weird Beard. "We're a band called PNC, or Partners in Crime," Diabolik says, "and BMP is the tent"—a tent that encompasses a variety of local musicians, rappers and singers. On Takeover, PNC is joined by 15 contributors, including vocalists Kishana Weems (from "Intro") and Ischa Bee (Minx), rappers Rhagenetix and guitarist Mike Sasich (Thunderfist, Bronco). Camden Chamberlain (Suicycles, Cavedoll) engineered. Although the material originated with PNC, Diabolik insists Takeover wouldn't be what it is without everyone's contributions.

The collective, then, should be proud of Takeover, an affectionate, self-deprecating, incisively critical, immersive and genuinely fun collage portrait of BMP, Ogden, the State of Utah, and LDS culture. "Hip-hop is regional," says Beatnic, explaining that East Coast, West Coast, Southern and Midwestern hip-hop "all have their own production sound, style, and presentation. I want to show specifically what the Mountain West—and specifically, Utah—have to offer. We love the 801. Utah is who we are."

That's another reason why Takeover, in spite of its initial apparent lameness, ultimately wins you over. Great hip-hop is fun and inclusive, a party where you feel as though you belong. It's not about one person, or one entity; it's about us.