Bassnectar’s creator—super-producer and DJ Lorin Ashton—might be crazier about community than wobbling bass freakouts. Growing up in a commune instilled in him a love of getting people together—he threw his first rave at 18. That’s probably why, in his 12th year, he’s a Burning Man prodigy, with low-end thumps and throw-downs resonating into Black Rock’s vastness. At often-sold-out Bassnectar shows, hordes of sweaty souls become community, in a sense—one amorphous, euphoric, life-filled creature with hundreds of hands all waving and pulsating. Onstage and in the studio, Ashton is a beat destructor, splicer, dicer and resurrector, in genre-bending bliss—self-described as “omnitempo maximalism.” That’s why ravers, rappers and Deadheads alike embrace Bassnectar, and why Ashton is heavily sought after for remixes, from Michael Franti to KRS-One. The blasting, three-screened light show should stimulate your senses tonight. Or, maybe it’ll be the perverse amount of sound equipment that Bassnectar tours with. But, it’s not about the volume, it’s about the heaviness of the music—how it feels, reverberates and pops in a crowd all at once. In the Venue, 579 W. 200 South, 7:30 p.m. Tickets: 24Tix.com

Legend has it that Big John Bates doesn’t use matches, but instead only his fiery fingers—the very ones that make his Gretsch scream and twang—to light burlesque performers Voodoo Dollz’s flaming tassels. Whether true or not, Bates punks, rocks, rock-a-billies, blues-es and jams with his three-piece band like there were flames under their feet and the devil at their backs. Bates will pull you into his world of female bike gangs, booze, back alleys, burlesque and more booze ... a place called Bangtown. That’s also the title of his 2009 release, featuring short songs covered in hot sauce and chased with a Jager shot. Check out groovin’ “Devil May Care,” or almost-romantic “Bikini Falls.” These lyrical stories bleed imaginative burlettas for the Voodoo Dollz to embellish. When the ladies are at their best, they’re barely legal in Utah—between blowing fire, stripteases and spanking each other. Both rock & roll and burlesque need to be a little dangerous— and, so do you, to enter Bangtown. Burt’s Tiki Lounge, 726 S. State, 8 p.m.

LESLIE & THE LYS
A diva from the Midwest? Hailing from Ames, Iowa, Leslie Hall has all the Crisco needed to fry up some hip-hop. Imagine Mimi from The Drew Carey Show dancing to Jazzercize in sparkling gold spandex—a concoction of wide hips, witty hops, willful laughs and DIY stage productions. Her’s is a humble Midwest “Bling, Bling,” like wafflehouse hashbrowns: smothered in gold glitter, capped with owl-frame glasses and topped with a blond bouffant. Hall is akin to craftin’ more than beats, having amassed the largest collection of gem sweaters around. Some of her 400-plus sweaters travel in her RV’s mini-museum. Critics often hone in on her collection, her cult-followed internet videos and her stylized outfits, but the music deserves some credit, too. Alone, she dazzles like gems sparkling. But, placed meticulously in fashionable patterns, like sweater decorations, the LYs play the synthisizer like a sewing machine and bedazzle beats from faux turntables. Lyrics like “You get me hotter that a stick of hot glue/ And, I’m scrapbookin’ everything we do” will make you chuckle, while you bounce to the beat-boxed sounds. Urban Lounge, 241 S. 500 East, 9 p.m.
Tickets: 24Tix.comWednesday 3.17 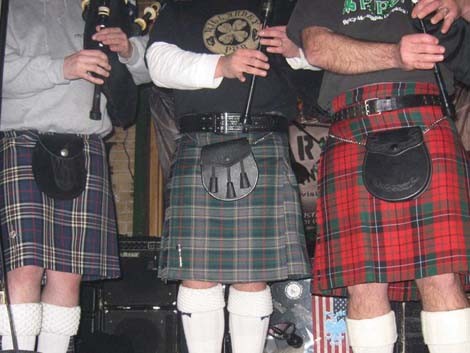 Piper Down has been counting down to Saint Patrick’s Day, well, since the day after last Saint Patrick’s Day. A ticker adorns its Website’s front page, and numerous advertisements throughout the year remind revelers that there’s more hope in March than just the advent of spring. As Piper Down builds the anticipation, it´ll also satisfy stumblin’ Dubliners’ cravings, starting March 11 with its sixth annual weeklong countdown. Brush up on your drinking songs and Irish toasts. Potcheen plays Thursday, the Wailing O’Sheas on Friday and Saturday’s parade after-party will feature “This Is Your Irish Band” live band karaoke. DJ Knuklz will be spinning at Tuesday’s New Paddy’s Eve party. Finally, on St. Paddy’s Day, kegs ‘n’ eggs brunch starts at 10 a.m., with the Rootin’ Boozers at noon. Then, the main acts Swagger and The Heathen Highlanders (right) will make you kick up your kilt with their local brand of Celtic rock. However, Piper Down doesn’t monopolize the celebration; there are plenty more parties and festivities to attend. Piper Down, 1492 S. State, 801-468- 1492, PiperDownPub.com