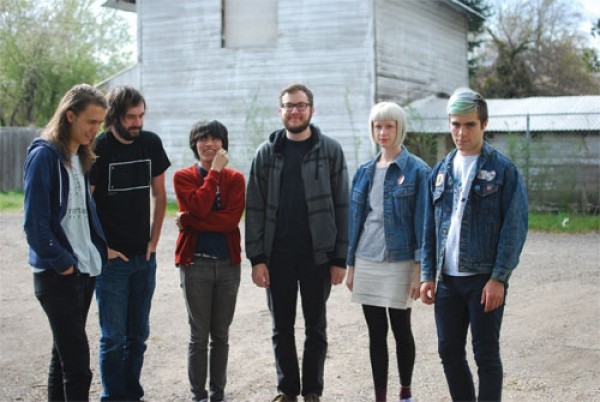 Life is full of philosophical quandaries and problems with unknowable, unforeseeable outcomes; the question is, how do you cope with them? For Provo band Bat Manors—and, more specifically, Adam Klopp, who is the lead vocalist and main songwriter and also plays guitar—music is the piercing light in the fog of the unknown, the thing that helps it all make sense. “Usually when I’m going through something weird in my life, I write a song about it to try to articulate myself or just try to figure out how to deal with it,” Klopp says.

On Bat Manors’ debut full-length album, Literally Weird, much of that “something weird” has to do with religion, a topic Klopp is personally acquainted with through his LDS background. On the album, “a lot of the songs are just about figuring out what I believed in in terms of God or religion, which I feel like is a pretty typical theme for albums, especially in Utah,” he says. “But in the rest of the songs, a lot of them correlate with just relationships that I’ve had with people and how they were affected by my conclusions with religion.”

In 2010, after Klopp came to Utah from Cleveland to attend BYU, he founded the indie-folk band Timber!, which “lasted for about a year or so,” he says. But even though the band was short-lived, it helped connect the multi-talented Klopp to the Provo music scene. He’s a current member of post-rock outfit Lake Island, and performs with dream-pop band Salazar and singer-songwriters JP Haynie and Ben Best.

It was while Klopp was an on & off member of folk-rock band The Mighty Sequoyah, when he “didn’t really … have a band that I was the main songwriter for,” he says, that “I had accumulated a bunch of songs” he’d written on his own. Klopp formed Bat Manors with a group of friends in order to play those songs, and the band performed their first show in January 2013. The current lineup consists of Katrina Ricks (vocals, bells, percussion), Landon Young (bass, clarinet), Mike Dixon (guitar, pedal steel) and Bret Meisenbach (drums), as well as Jacob Hall (percussion) and Kyle Hooper (keyboard, pump organ), who also play in Lake Island.

Even though Bat Manors have been together hardly more than a year, their sound and recording style has “evolved in a way that I didn’t expect,” Klopp says, which is evident on Literally Weird. Demo versions of a lot of the earlier songs were heavily distorted “garage-rock, really poppy lo-fi songs” recorded in his bedroom, he says. But the growing band lineup began to shape Bat Manors’ sound. “We just kept adding members,” he says. “It seems more fun to me to have a lot of friends in the equation,” bringing with them new sounds to add to the overall aesthetic, which has taken on a folky, chamber-pop feel that’s truer to how Bat Manors sound live.

Ensconced in the beautifully delicate symphonic style of Literally Weird are Klopp’s musings on faith, in a “chronological narrative that corresponds with different events in my life,” he says. With Klopp’s unearthly, tremulous singing voice weaving among strings and warm pedal steel, the album begins with the hopeful “Otter, Friend,” in which he is “opening up a question about religion,” he says. From there, the album proceeds to explore the often thorny process of challenging the beliefs of the faith you were raised in.

The feeling of being “forced to be a part of something or you’re lying to yourself or to other people,” Klopp says, is the subject of “Species,” but the ending of the song is “triumphant, just [about] being liberated.” The philosophical concept of Manifest Destiny—which “I felt was present in Christian faith, but specifally Mormonism,” he says—is analyzed on the aptly titled “Manifest Destiny,” a criticism of the idea as a “manipulative concept to justify a terrible history, colonialism and genocide,” he says. Standout track “Cabin 4” continues the album’s spiritual theme, even if the song “departs from the narrative a little bit,” he says.

In actuality, when Klopp jumped into a lake after a self-performed haircut while on a family vacation, he was rained on by a tiny rain cloud and not a “prankster watchman angel,” as he describes in “Cabin 4.” But the song, like so many others on Literally Weird, speaks of the point where people encounter forces beyond their control, and perhaps consider the idea of supernatural beings impacting their human existence.