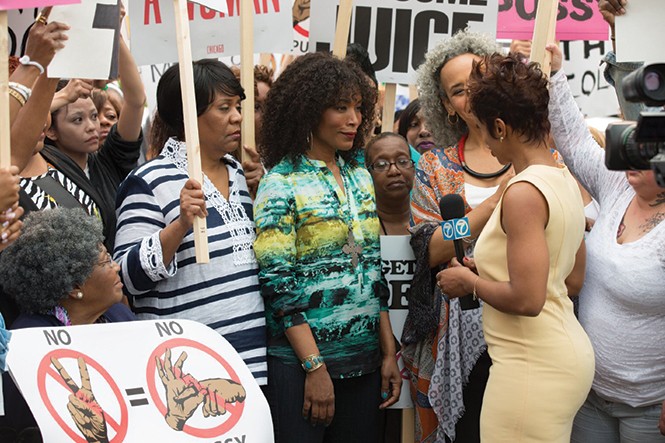 Spike Lee is not a subtle filmmaker. And it has taken me nearly 30 years—up to and including his latest feature, Chi-Raq—to fully appreciate that this is not necessarily a problem.

Because I'll confess it: I'm a member of the Cult of Subtlety. There's a unique feeling that comes from narrative's ideas sneaking up on you, shifting your perspectives between the opening and closing credits, or between the closing credits and the next day. The fine strokes of a paintbrush feel like art; the banging of a hammer against an anvil, even when forging a weapon, can just feel like noise.

But Lee has never been timid about forging cinematic weapons. Whether striking at the overtly political, or doing what amounts to Hollywood work-for-hire, he won't shrink quietly into the corners. And while his relentlessness has produced both masterpieces like Do the Right Thing and misfires like She Hate Me, it's long past time for me to recognize more consistently when relentlessness has its place. While Chi-Raq may be broad, scattershot and brazenly un-subtle, its blunt force feels bracing.

And here Lee is consciously working within a tradition of confrontational satirical truth-telling, adapting Aristophanes' Lysistrata into the violent world of modern-day Chicago, which is occasionally (and controversially) dubbed "Chi-raq" due to its post-9/11 homicides totalling higher than American military deaths in the Middle East. Here, the armies are rival gangs on the South Side: the Spartans, led by rapper Chi-Raq (Nick Cannon), and the Trojans, led by Cyclops (Wesley Snipes).

As the gun violence continues to add casualties—including the young daughter of a local resident (Jennifer Hudson)—it seems that desperate measures are called for. That's what Helen (Angela Bassett) suggests to Chi-Raq's girlfriend, Lysistrata (Teyonah Parris): a "sex strike," denying all the men the pleasures of their flesh until those men can put down their guns and end the killing.

It's not just the premise of Lysistrata that Lee and his co-writer Kevin Wilmott (The Confederate States of America) have adapted here; they go full classical Greek theater, right from the outset. The opening song plays over a black screen displaying the lyrics, serving as almost an overture. Samuel L. Jackson appears as narrator Dolmedes, and announces that the dialogue will be in verse. Even the choreographed moves and "chastity pledge" evoke the unity of a Greek chorus—and a kind of unity, even from the strippers and prostitutes, that would be essential for Lysistrata's movement to have any effect.

That theatricality makes it easier to embrace all of Chi-Raq's more outrageous conceits, including a cadre of women led by Lysistrata taking over a National Guard armory simply through application of their feminine wiles, and the subsequent attempt by an official of the mayor's office (Harry Lennix) to break the women's no-sex will power by playing a slow jam by the Chi-Lites. And when a group of middle-aged guys in a fraternal order—led by Old Duke (Steve Harris)—decides to confront these women because after all, they're not the problem, it feels like a wonderful swat at the #NotAllMen posturing of guys more willing to take out their frustration on uppity females than confront the possibility that they have any role to play in solving the problem.

That doesn't mean that Chi-Raq won't sometimes swing wildly, and get caught in awkward tonal shifts. A lengthy sequence set at the dead child's funeral involves not just a liturgical dance, but an extended sermon by the minister (John Cusack) detailing all of the government policy decisions contributing to the culture of violence among young African-American men. It's also hard to take seriously the sub-plot involving finding the identity of the child's killer, once it becomes clear that the obvious resolution is supposed to be somewhat surprising.

But this is, after all, the realm of the Spike Lee who will end a film with his long-favored call to "WAKE UP." A call to action and refusal to accept the status quo like the one in Chi-Raq can certainly be delivered in an entertaining package. And if it needs to be delivered with a shout rather than a whisper to get that message across, that's a lack of subtlety we should all be able to live with. CW