Be of Good Birria 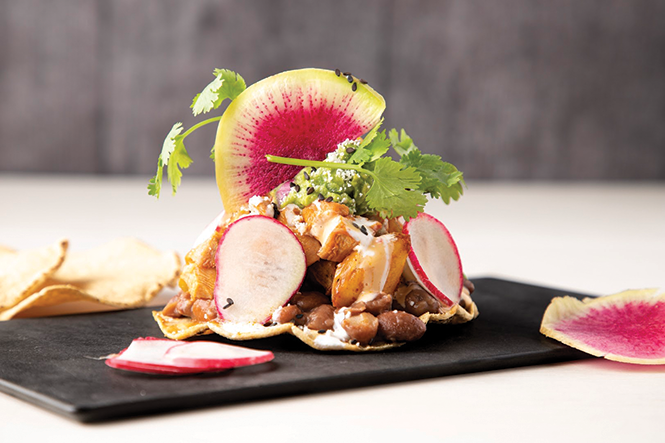 One of my favorite things about being on the food beat at City Weekly is being able to witness the evolution of a good idea. Take Sobe Eats (120 W. 9000 South, 954-616-7559, sobeeats.square.site), for instance. This local catering company/food truck/culinary lab—which took home a 2020 Best of State award for best Mexican and best innovation—recently expanded to a brick-and-mortar location in Sandy. It's the culmination of several years of blood, sweat and birria, and their concise menu is a distillation of the creativity and innovation that has earned Sobe Eats their rock star reputation.

The idea gained traction when the three Soberani brothers—each accomplished chefs on their own—decided to join forces and create something special. Sobe Eats celebrates their love for the Mexican cuisine primarily found in the Acapulco area, which fuels their inspiration for spicy shrimp tacos ($3.75) and tuna poke bowls ($11.75). It's also been a chance for the brothers to experiment with flavor fusions and tropical-themed mocktails that feel right at home in the dirty soda capital of the Western United States. All in all, Sobe Eats has established itself as an eatery that is full of surprises.

Perhaps the biggest surprise for me was the tiny space from which Sobe Eats operates in Sandy. It used to be home to one of those nondescript drive-through coffee shops, so it's not much bigger than a food truck—which is one of the reasons the Sobe team feels right at home there. As I drove beneath the twinkling strings of lights that connect the building with their drive-through menu, I had a sudden vision of a post-COVID-19 summer where I could just park and order up some tacos from the walk-up window while watching the lights change on 90th South. For now, the drive-through only model will do me just fine.

My visit took place on a Tuesday—otherwise known as Taco Tuesday at Sobe, which is the only day of the week when you can get their four taco varieties. With a few exceptions, the menu at Sobe Eats changes based on the day, so burritos are available on Mondays, tacos on Tuesdays and their blockbusting banh mi tortas are available on Wednesdays.

Though the tacos are fairly straightforward on paper, they look spectacular when they come out. You've got the roast pork birria ($3.75), roast chicken tinga ($3.25) spicy shrimp and the veg-guac ($3.75 each), each one arriving bedecked with a thin slice of watermelon radish and either yellow or blue corn tortillas. The use of color in their garnishes and toppings is one of things that sets Sobe apart; I can't think of a casual restaurant that takes as much pride in presentation as they do at Sobe.

Of the four options, the smoky and juicy birria tacos hit all the right taco buttons. The pork is seasoned and cooked to tender perfection, and the crisp onions, radish and cilantro accent the meat's stellar flavor. The tinga tacos are a bit lighter, but don't skimp when it comes to marinated roast chicken flavors. The shrimp and veggie tacos are good, but didn't pack the same flavorful punch as the tinga and birria respectively. All the same, there are far worse places to spend your taco Tuesday.

Fans of these fillings can get them in a variety of different ways at Sobe. On Mondays, they're served up in warm, homemade tortillas as part of the burrito menu. As is most often the case with me, I'd have to recommend the burritos over the tacos, as delicious as they are. Though the birria tacos get a lot of flavor mileage for their small packaging, the birria burrito ($10.75) is a powerhouse. That juicy, tender and slightly spicy flavor of the meat comes through in waves, and all that extra room gets stuffed with guacamole and crispy papas bravas. In a land filled with excellent burritos, this is one that makes an impression.

In addition to these Mexican classics, the Sobe team has managed to fuse two of my most beloved sandwiches—the banh mi and the torta—into a monstrous torpedo of a sandwich. The banh mi tortas can be filled with any four of Sobe's foundational fillings and then get topped with pickled onions, radish, guacamole and cilantro. It's definitely more torta than banh mi, but the baguette bun makes it look the part while keeping all that delicious filling inside. I might still prefer the burritos at Sobe Eats, but I can't deny my affection for something that shows love to two sandwiches that are close to my heart.

In addition to Sobe's stalwart menu of Mexican classics, I can't help but admire their drink menu. It's no secret that dirty sodas are big business here in Utah, and it's a market that Sobe has cleverly tapped for their own purposes. Their four current mocktails include a minty mojito ($2.75), a citrusy naranjada ($2.75), a dark and stormy sangria ($2.75) and a creamy horchata ($2.75). Like the food at Sobe, each one looks beautiful, and fans of the artisanal soft drink will no doubt be impressed.

Those who have been following the trajectory of the Soberani's labor of love will be delighted by this new location. It's been exciting to follow their journey so far, and I'm looking forward to seeing what they come up with next.